The Museum Brandhorst presents the first international survey exhibition of the American artist Seth Price (b. 1973). The exhibition comprises over 100 works, including sculptures, films, photographs, designs, paintings, videos, clothing and textiles, web designs, music, and poetry. Since his artistic beginnings, Price has programmatically explored creative terrain outside the visual arts.

He takes up production and marketing forms from the music industry, the fashion world, literary publishing and makes use of their dynamics in his art. His art deals with the fundamental changes that have taken place within visual culture that have gone hand in hand with the ubiquitous rise of digital media.

Seth Price belongs to the generation born before the establishment of the internet. Like others of his generation he has witnessed at first hand each step of its spread: the first computer games and programs of the 1980s whose pixelated aesthetics became something of a conscious trademark; the internet as a place for various political utopias in the 1990s, a time when it was assumed that new technologies held democratizing potential; and, finally, the total digitalization of all aspects of life through Web 2.0 and the smartphone in the early 21st century. 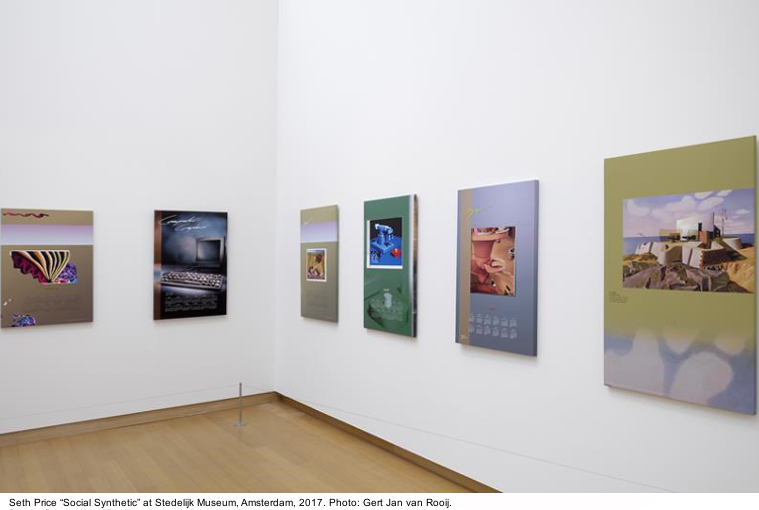 From 2001 onwards, digitization has increasingly been a catalyst for growing social crises, from the “War on Terror,” which has also been a war of images, to the crises of the financial system. The artistic practice of Seth Price has evolved alongside these conflicts and in relation to the models of desire that drive life in a global, neoliberal society. One of the central themes in Price’s work is the threatened status of the subject.

In the face of the dramatic upheavals of a mediatized present, this self increasingly ‘withdraws’ to the surface or becomes visible by virtue of its own absence: Price’s Vacuum Forms (2004-12) are vacuum-formed plastic reliefs of body-parts, his Silhouettes (2007-09) take digital images from the internet that allow intimate gestures of human communication—like the handshake or a kiss – to be understood only as negative space.

The light boxes shown in the ground floor of the Museum Brandhorst (2016-17) are based on photographic studies of human skin, drawing on satellite-imaging software. Some works do not have a fixed form, and can be installed differently depending on the space and context: they can be folded, rolled, or crumpled and placed on walls, ceilings, or on the floor. 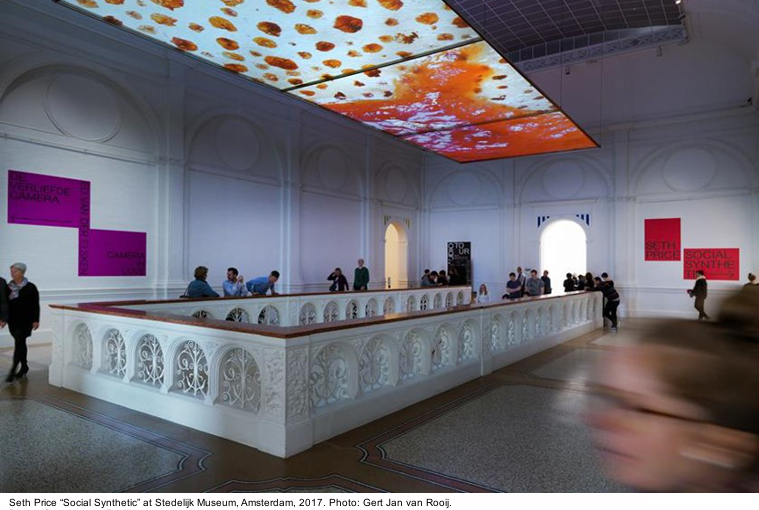 The works play in part on the flexibility and placelessness of images circulated as digital files via the Web. In his mylar sculptures‚ (2004-8), for example, Price uses stills from jihadist propaganda videos. The works shown in the exhibition convey a sense of the emotional landscape of the early 21st century.

We see flesh and skin, commercial logos, waste and trash, fashion and design, packaging, pictures of horror, bright screens, comedy and brutality, computer games, and luxury surfaces. Some of these works now possess an almost iconic status. In his Vintage Bombers, Price reflects on the mechanism of constant reproduction and revaluation in the digital age.

Originally created for WWI military pilots and based strictly on utility, the bomber jacket was adopted as a symbol by numerous 20th century subcultures, from bikers to punk to hip-hop. Today it stands as a ubiquitous icon of mass-produced fashion. Crumpled as if discarded, and stamped with its date of production, the cast of the molded jacket is rich in references to the ongoing, fast-changing production of identity. 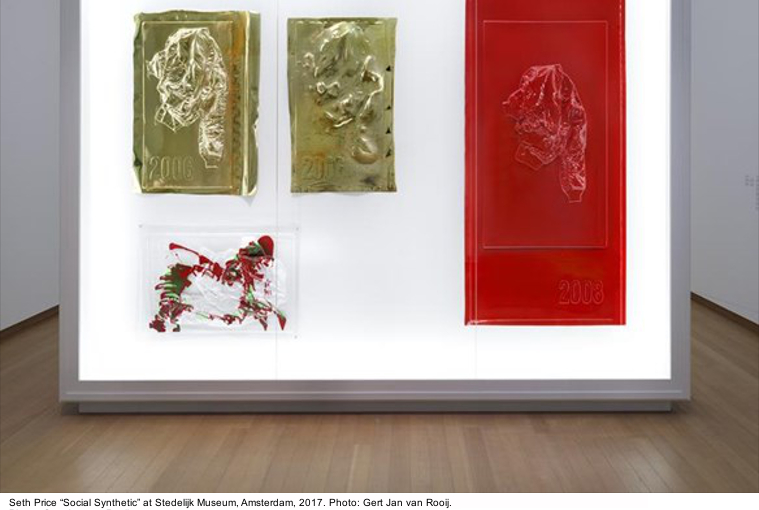 Seth Price – Social Synthetic is a collaborative exhibition presented by the Museum Brandhorst and the Stedelijk Museum Amsterdam, where the exhibition was shown from April 15 to September 3, 2017. The exhibition was curated by Achim Hochdörfer, Tonio Kröner, and Beatrix Ruf, director of the Stedelijk Museum Amsterdam, in close co-operation with the artist. This presentation of the versatile and influential practice of Seth Price takes 2000 as its starting point and concludes with a new series of works produced expressly for the exhibition.