Jon Rafman: I have ten thousand compound eyes and each is named suffering

The Stedelijk Museum presents Canadian artist Jon Rafman (1981, Montreal). In his video films and installations, Rafman explores the social effects of digital media. The artist is fascinated by how the boundless possibilities of the internet and virtual platforms affect and re-define our behavior, social life, and even personal identity.

In the coming years, the Stedelijk will regularly bring attention to artists whose work reflects upon new technologies and digital culture. The museum already presented a major survey of the computer-generated videos of Ed Atkins early last year, and its current presentation on Avery Singer shows how the artist utilizes digital software in the realization of her paintings. Like a visual anthropologist, Jon Rafman delves into the subcultures of the online world, analyzing the behaviors of users of multiplayer video games and 3D virtual communities like Second Life in his videos.

His work is frequently populated by obsessive characters whose lives revolve around gaming and other digital activities, and who are possessed by a hyper-individualized mindset that exists somewhere between real life and digital reality. Now, in 2016, as the first virtual reality goggles like Oculus Rift and MicrosoftHoloLens are being marketed for commercial use, immersion in a world where reality and virtuality overlap will become a mainstream experience for a broad public. Rafman’s work offers a nuanced exploration of this phenomenon, without moralizing or making judgments. His videos and installations are witty and full of wonderment, yet often tinged with a profound melancholy. 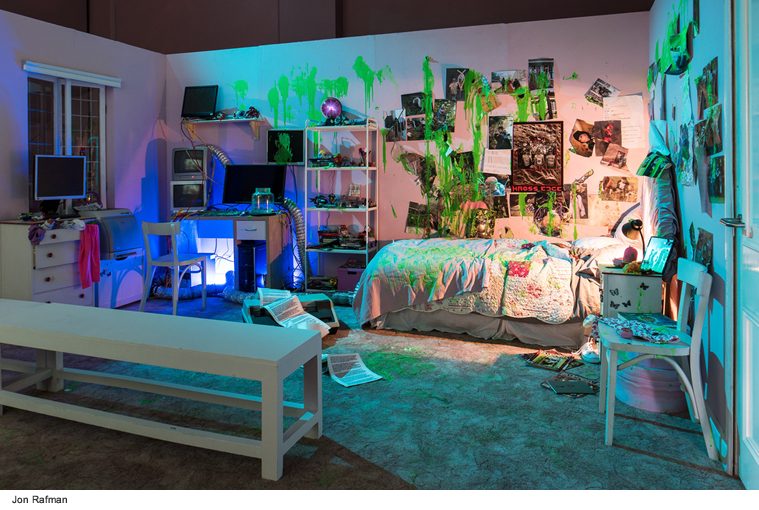 Rafman’s installation comprising a selection of recent work occupies galleries 0.28 and 0.29 (the inner exhibition spaces of the design circuit) and gallery 1.16 on the upper floor. The works are embedded in an environment of atmospheric blue light, creating for the viewer a sensation of stepping into another reality. Visitors can take a seat in one of the furniture sculptures, or even isolate themselves completely from the museum’s public, losing themselves in a world of avatars, online subcultures, and fetish communities in the far-flung corners of the web. The title of the exhibition, I have ten thousand compound eyes and each is named suffering, ​originates from Rafman’s film, Erysichthon (2015). The exhibition is curated by Martijn van Nieuwenhuyzen.

Jon Rafman was born in Montreal in 1981. He obtained an MFA at the School of the Art Institute of Chicago, after studying philosophy and literature at McGill University (Montreal). He lives and works in Montreal. Rafman’s work has been previously shown in the Netherlands at a one-day exhibition organized by the Sid Lee Collective in Amsterdam (2011), at a screening at the IMPAKT Festival in Utrecht (2014), and in the group exhibition, The Fluidity Aspect, during the Today’s Art Festival in The Hague (2014). The work of Jon Rafman are also featured in the Berlin Biennale and at Manifesta 11 in Zurich this summer.