Uncanny Values: a map of uncanny places, and how to get through them

Uncanny Values: Artificial Intelligence & You is an exhibition presented by the Mak of Vienna as part of the Vienna Biennale for Change of this year, called Brave New Virtues. Shaping our digital world. Artists, designers and architects have tried to develop new ways of seeing, with which to imagine and model our future actively and positively.

Technology has become our natural habitat and at this point it is necessary to have the tools to understand and decipher it; today’s digital devices are in fact real change agents, that influence our lives and the very definition of reality.

We should begin to build an accurate map of the uncanny valley so that through robotics research we can begin to understand what makes us human. This map is also necessary to create—using nonhuman designs—devices to which people can relate comfortably. 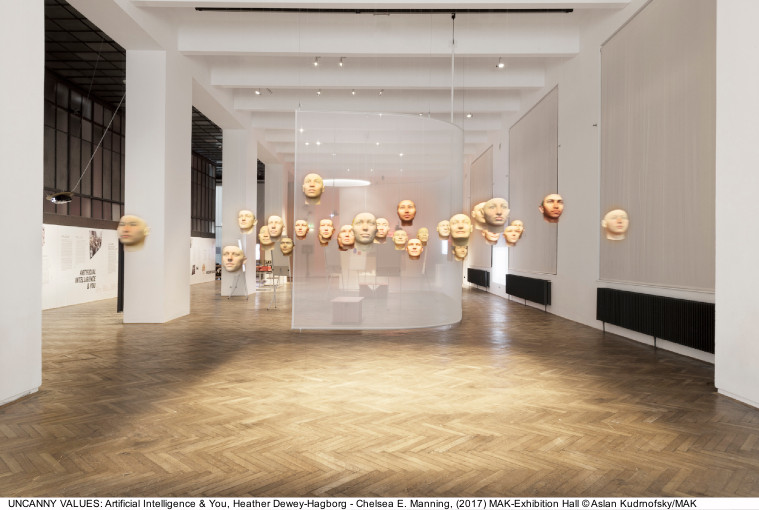 In The Uncanny Valley, published in 1970 on Energy, the Japanese roboticist Mashairo Mori finds as people’s sensation of familiarity and pleasantness towards robots and androids grow up proportionally to their anthropomorphism. But when the degree of realism and likeness is too higher, people feel uncanny and unpleasant feelings.

The human curiosity for robots and thinking machines was always accompanied by disturbances and concern. The exhibition takes the moves by these reflections to wonder about Artificial Intelligence, in the belief that only with a different cultural and technological sensibility we can really understand these tools.

Uncanny Values is a map of the contemporary AI’s applications and proceeds by questions, hypothesis and attempts. What are the ethical, political and ideological implications of the use of these devices in everyday life? 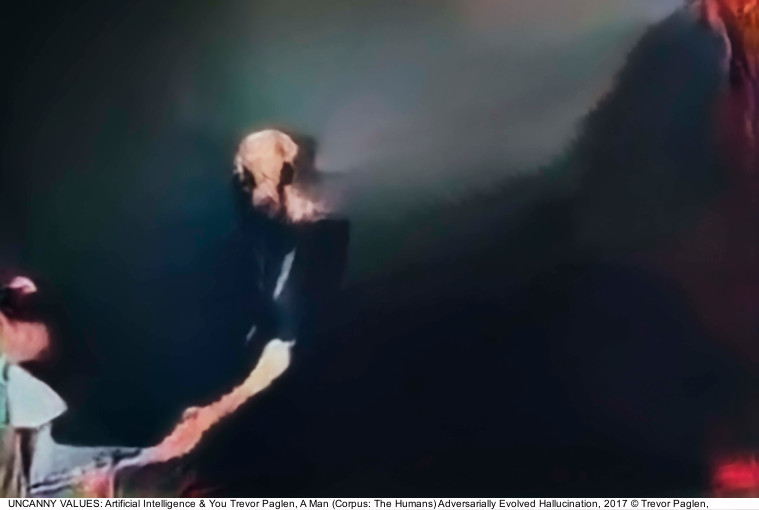 In Probably Chelsea, a spectacular installation made by 30 possible Chelsea Manning’s portraits, Heather Dewey-Hagborg shows the limits and the dangers of the algorithmic DNA profiling. AI are often indeed used for image recognition and elaboration through complex machine learning processes.

In MoMa’s Baby (The Human Who Taught Computers To See), Mladen Bizumic is wondering about these issues from Russel A. Kirsch, the American engineer inventor of the first image scanner in 1957. In Behold These Glorious Times! and in the series Adversarially Evolved Hallucination, Trevor Paglen accompanies us in a journey to the centre of the artificial vision: by showing us how the machines see and learn to see, he make us think about the criticalities of machine learning. 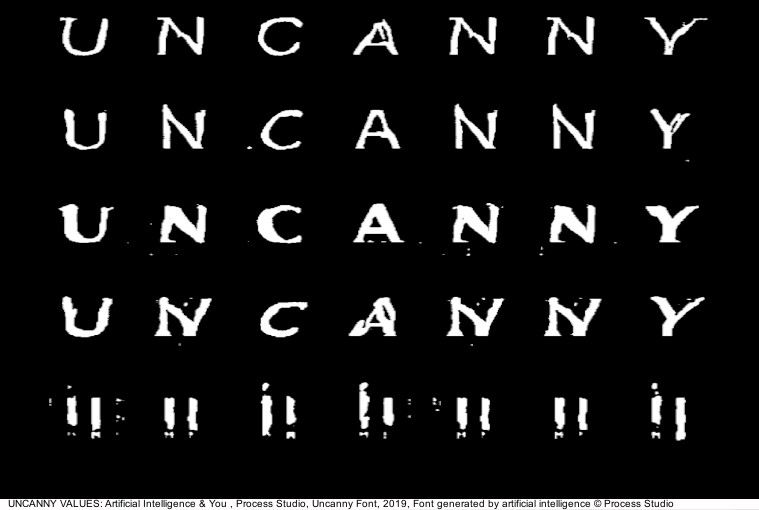 Constant Dullart in DullDream has developed an algorithm that makes the images loaded on one specific platform “less interesting”, as opposed to the most famous DeepDream. Artificial Intelligence is also frequently used in the fields of Narrator and chatbot, software programmed to simulate a human conversation, like Eliza, a computer program created from 1964 to 1966 at the Mit by Joseph Weizenbaum, which is able to simulate a psychotherapeutic conversation.

In Talk to me, Jonas Lund presents a very special chatbot: it holds the artist’s voice and it can be downloaded and used as voice assistant from visitors. Also, the collective Superflux analyze our relationship with these technologies in the short film Our Friends Electric.

Many are the artists who investigate the relationship between language and technology: Giulia Bruno and Armin Linke, in collaboration with the artist and scientist Luc Steels, present the videoinstallation Sprachagenten / Language Agents, while Lynn Hershman Leeson has created two AI characters, Agent Ruby e DiNA, by which think about the complex relationship between man and technology. 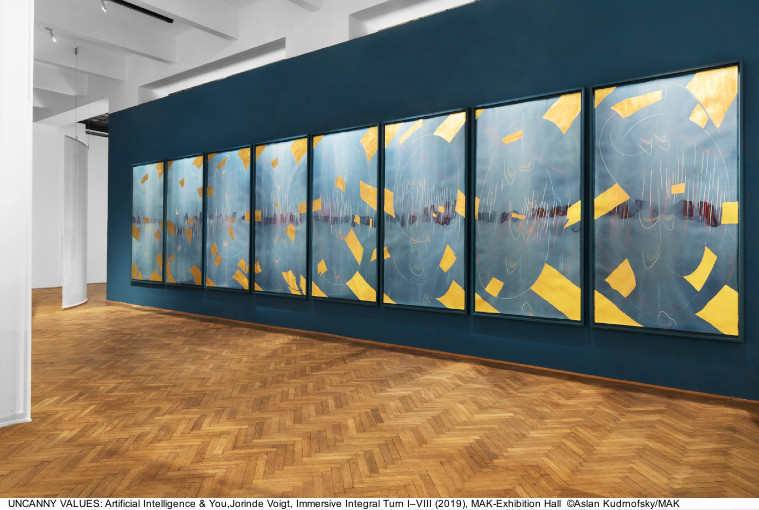 James Bridle’s Se ti sabir is an attempt to seek new ways of interaction among man and natural or artificial environment. Another controversial situation is the one where technology meets the spheres of creativity or emotions: Jonas Lund’s Significant Other is an interactive installation that investigates the relationship between feelings and technology, a theme that is also faced by Lynn Hershman Leeson in Emotional Barometer.

The possibility of creative machine is explored in artworks like Poetry Machine 1.0 by David Link, that has been the first fully autonomous poetry generator, and Immersive Integral Turn I-VIII by Jorinde Voigt. Particularly interesting are the generative works designed by Process Studio, AImoji and AIfont: two AI that produce uncanny Emoji and Font, forcing us to question our vision and interpretation of the reality. 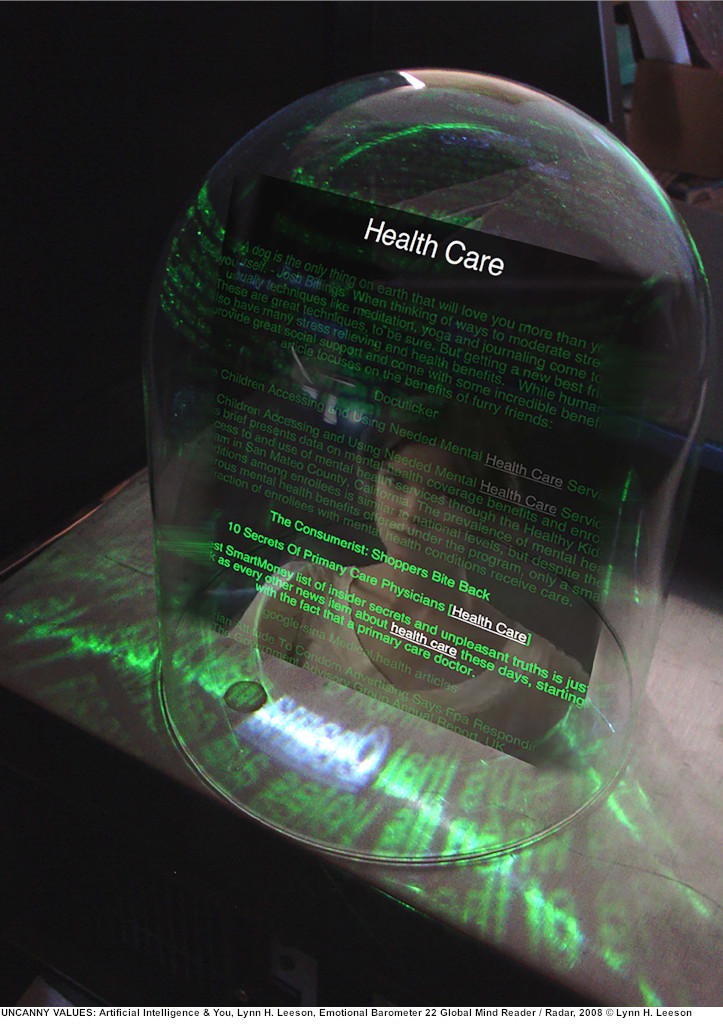 In BIY – Believe it yourself the automato.farm reflects on superstition, while in Centralization vs Decentralization Simon Denny highlights the grey zones of technological capitalism; Kate Crawford and Vladan Joler’s Anatomy of an AI is a detailed investigation of Amazon Echo, and Rachel Ara’s This Much I’m Worth (The self evaluating artwork) is a device where an AI assesses its market value based on real data.

In the exhibition is also exposed Theseus, a mechanical mouse able to move in a labyrinth invented in 1952 by Claude Shannon, which is considered one of the first example of machine learning. 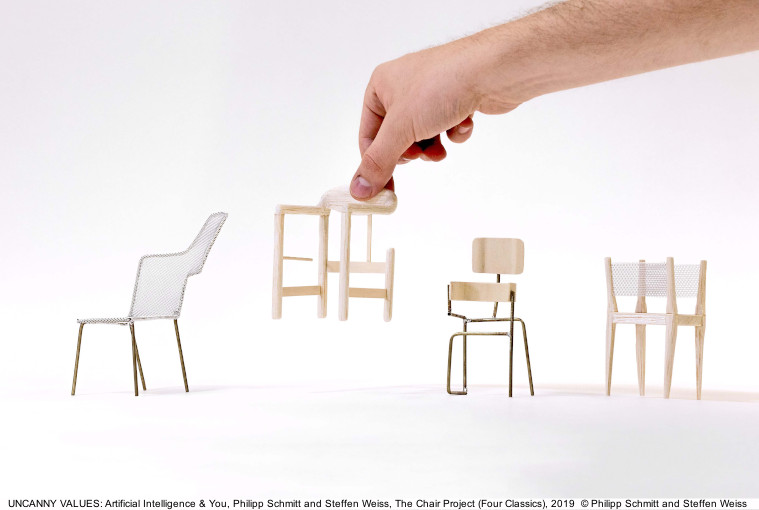 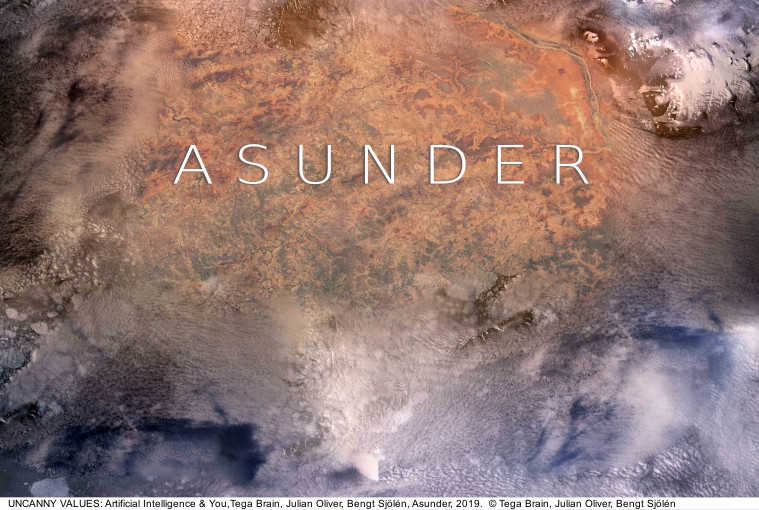 The technological future that has fascinated and scared men over time is now a reality that we have to face. In the same time, it is difficult to foresee what is waiting for us round the corner: will it be a future of coexistence and collaboration, like that of The Chair Porject (Four Classics) of Philipp Schmitt e Steffen Weiss, or will we face super Artificial Intelligence like the one visualized in Asunder by Tega Brain, Julian Oliver and Bengt SjÖlén?

There aren’t solid answers to these questions for now, but we can try to test the present to be able to imagine the future, and make it less uncanny.