The future, despite everything: Hito Steyerl at Düsseldorf’s K21

On September 26, 2020 the exhibition Hito Steyerl. I will survive was opened at Düsseldorf’s K21. It is the first complete overview of the artist, filmmaker and author to be presented in Germany, and it has been designed and developed by the Kunstsammlung Nordrhein-Westfalen and the Centre Pompidou, where the exhibition will travel in February 2021.

Unfortunately the museum is closed until November 30, 2020, due to the new protective measures to contain the corona pandemic, a very common situation for many cultural institutions around the world. However, the museum’s site is full of information and images about the exhibition, so the visitor can easily and pleasently surf it waiting to return to the rooms of the K21. 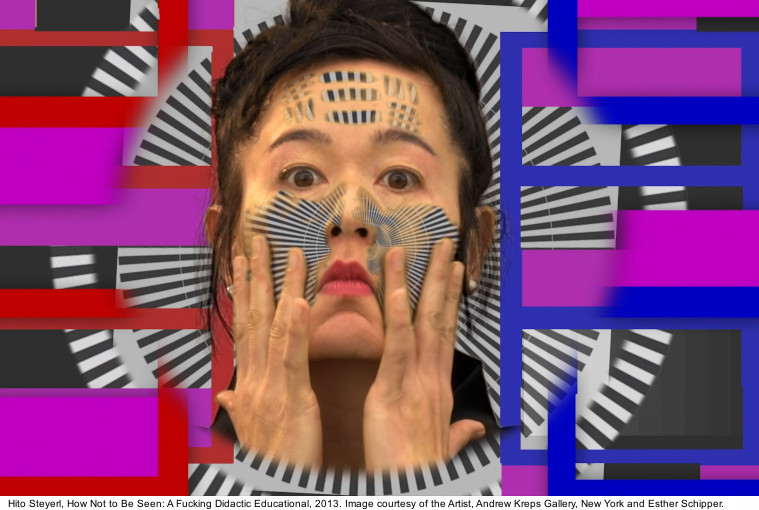 I Will Survive. The title of the exhibition is glaring and meaningfull as ever: it’s a manifesto of time, a recurrent thought, a mantra for the present and a promise to the future. Steyerl’s artworks keep us gronde and recall the great issues of our times, sharpened by the pandemic and waiting for a cosideration, and a turning point.

This is an intrinsic characteristic of Hito Steyerl’s artworks, which are real visual essays, with a strong connection between artistic and theoretical production; for this reason, it’s very important to know both the aspects of her work.

Hito Steyerl, born in Munich in 1966, deals with the big issues of our epoch: Big data and surveillance, capitalism and globalisation, the role of media and technology, Artificial Intelligence, the production and circulation of digital images, the represetation of wars and climate change, the social role of art and museums, just to name a few. 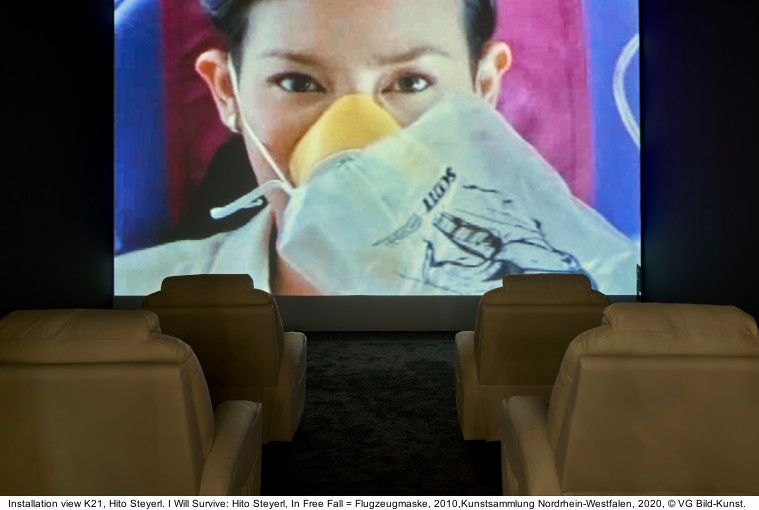 The cornerstone of the exhibition is SocialSim, a new multimedia installation developed especially for the occasion, which explores the potential of digital technologies, simulations and AI, in relation to social upheavals, artistic creativity and pandemic conditions too. The artwork includes a focus on collective hysteria and social network, examined in the social simulation Dancing Mania.

The expositive path then presents the most famous and important author’s artworks, starting from the early films made shortly after Steyerl completed her studies is Documentary Film Direction, like Die leere Mitte (The Empty Middle, 1998) and Normalität (Normality, 1999), which investigate the recovery of racism and nationalism in post-reunification Germany, up to large-scale installations from the past ten years. In Free Fall (2010), for example, explores the 2008 financial crash, while Guards (2012) is a videoinstallation where two museum guards are filmed at the Art Institute of Chicago while they illustrate and perform defense and attack strategies due to protect the artworks, transforming the museum in a war zone.

Even if Steyerl’s work concerns social issues, it is far and different from the traditional documentary, to whom she substitute a new narrative practice called “documentary uncertainty”. The artist wrote: “The lesson is that we should accept the intensity of the problem of truth, especially in an era in which doubts have become pervasive”. 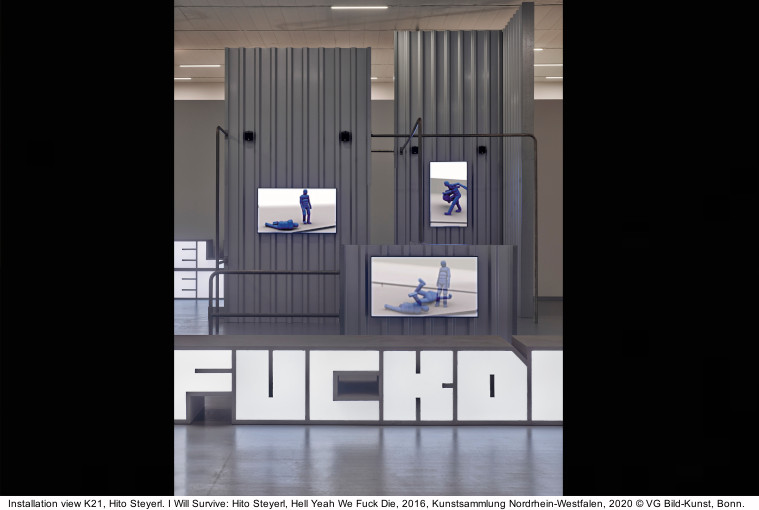 Her artworks valorize the shadow of doubt which has always accompanied the images defined as documentary: is it real what I’m looking at? Can I believe what I have before my eyes? A long-standing suspect, that according to Hito Steyerl is the essential quality of contemporary documentary form, something not to hide, because the uncertainty of these images reflects the world’s.

HellYeah-WeFuckDie is composed of a series of videos presented in an environment that resembles a parkour module: laboratory test videos of humanoid robots subject to various types of stress (theoretically in the name of progress) are flankned by shooting of Diyarkabir’s ruins. The artist comments the images of the city with a series of questions oriented to Siri about the role of thechnology in contemporary war. One of the question is: “Siri, are robots today devloped to save people in disaster zones?” A crucial topic, since many of new vision tecnologies, as Kevin Robin writes in Photovideo. Photography in the age of computer, “have been shake by, and are informed by, particolar values of western culture; they have been shake by a logic of rationality and control; and they are informed by a culture that has been both militaristic and imperialistic in its ambitions.” (just think that virtual reality techonologies were designed and tried out within space and military programmes). 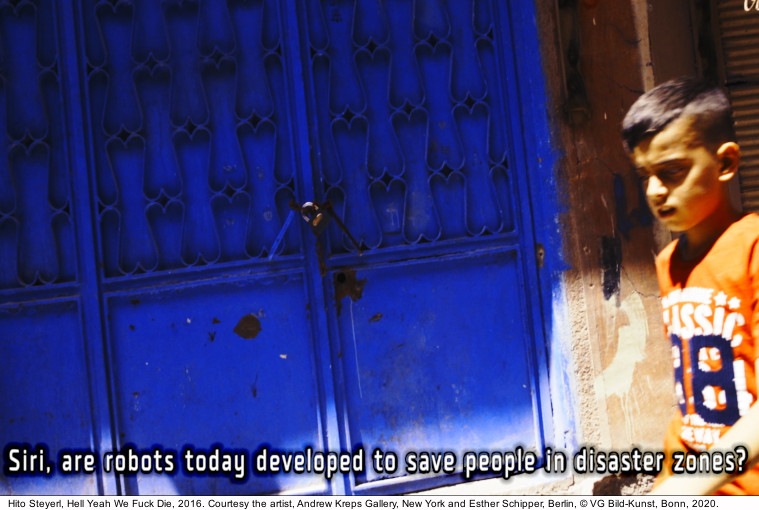 Another fundamental crux of Hito Steyerl’s research is the reflection about contemporary surveillance, relating to digital revolution: The city of broken windows (2018) is a multimedia installation about AI industries and surveillance technologies, and how they influence our urban enviroment; the ironic and brilliant How not to be seen. A Fucking Didactic Educational .Mov File (2013), a tribute to the omonimous Monthy Phyton’s Flying Circus sketch, is an informational video on how not to be seen and became invisible in a world full of images and surveillance apparatus.

This is the future/Power Plants (2019) is a reflection about a possibile future, a magical, immersive and suggestive installation staging through the use of artificial intelligence and augmented reality applications. 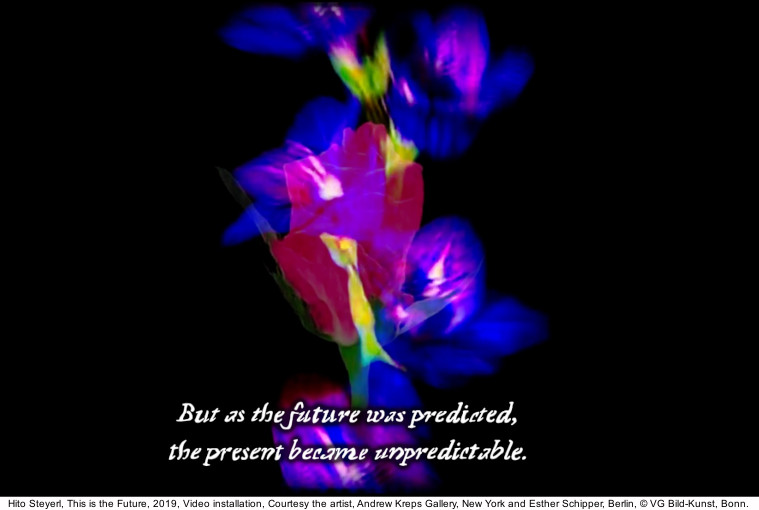 Write about Hito Steyerl is no small undertaking; her artistic research is like a labyrinth, perfect synthesis of complexity and rationality, it’s irreducibile, stratified, extensive.

In Treccani online vocabulary, “critical” is everything “that concerns with the intellectual faculty to examine and judge, and the excercise itself of this faculty, both addressed to works of thought, literary, artistic, and to situations, facts, behaviours”, and also what’s “related to a crisis, therefore serious, difficult, dangerous”.

And maybe we can define those of Hito Steyerl as critical images. These images constantly question themselves and the reality to which they refer, and tell of a “serious, difficult, dangerous” era. 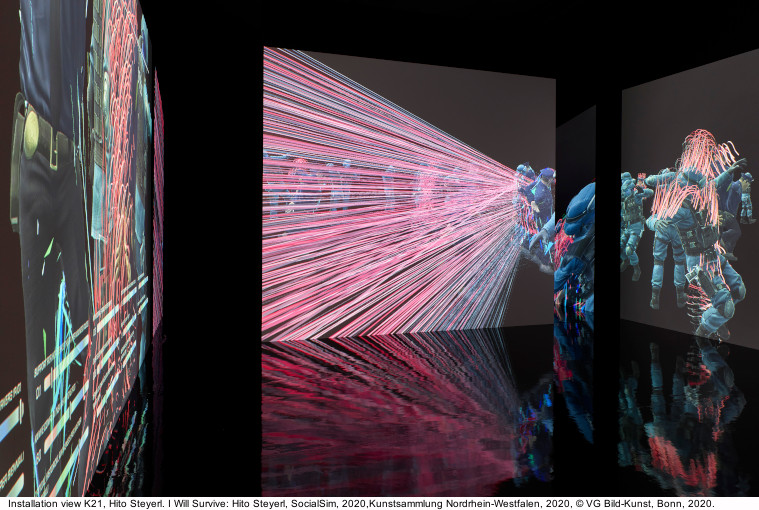 Hito Steyerl.I will survive tell us about a difficult, inscrutable and often incomprehensible world, where the images have become a thing like you and me, using the artist’s words. The artworks of Hito Steyerl make us reflect about the uncertainty of our times (and as James Bridle writes in Machine Learning in practice, “all times are uncertain”) and invite us to exercising doubt, not as an obstacle but as a tool to sail in this sea of unpredictability. They encourage us to imagine excape routes and to search secondary roads, to flush out tricks and false myths, waiting for a future that, despite everything, is destined to arrive.