A2410 Festival: a cultural bivouac that is born at the top of North Grigna

A2410 is a cultural bivouac that is born at the top of North Grigna, the highest peak of the Grigne group. A2410 is promoted by CAI Milano Rifugio Luigi Brioschi, produced by the Cultural Association Mobeel and is directed by Francesco Bertelé.

A2410 is a mobile and temporary space designed to exist in the most extreme environmental conditions. A “casmophytic” culture space (physiologically adaptable, such as the “omnidirectional” type of vegetation, “off limits”), designed to produce an immersive experience and compatible with mountain ecology.

The structure of a2410 (the cell) is in fact the result of a specific search on the minimal housing structures. Capable of hosting an audience of 30 people and cultural events, the cell is equipped with state-of-the-art video audio technology, featuring spatial audio and wireless headset listening, dome video projection and 360 degree channel video playback. This “live system” is designed to capture and record what’s inside and amplify it remotely over the web.

A2410 is indeed a space conceived for the daring ones who will reach the summit, and for all those who want to have a deferred experience via ether. In this ecosystem, the A2410 can accommodate art installations, concerts, video and acoustic immersive experiences. It wants to be a place where ideas take shape, a body with inertia and poetry, a coefficient of friction and aerodynamic potential. Ideas wrapped up to get air and get fucked up at 4 o’clock. Ideas that will probably escape control and comfort. 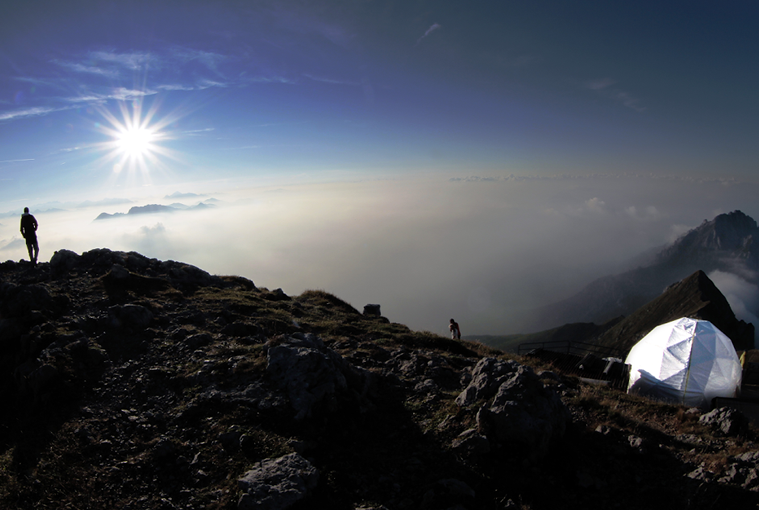 a2410 was created in Grigna Settentrionale, at an altitude of 2410mt above sea level. a2410 is mobile and exists at high altitudes.

a2410 is unrestrained: a cultural bivouac created to exist under the most extreme conditions. a2410 is efficiency: it will be equipped with an avant-garde audio and video technology calibrated to the minimum necessary, designed in terms of environmental sustainability (*)

a2410 is research: the ”cell”, or the structure of a2410 is the result of a specific research regarding minimal living structures which are designed to withstand extreme environmental conditions; the area of research regards mountaineering and advanced technology; the structure of a2410 will be able to hold 40 people and cultural events with screenings, talks, presentations, concerts and performances. 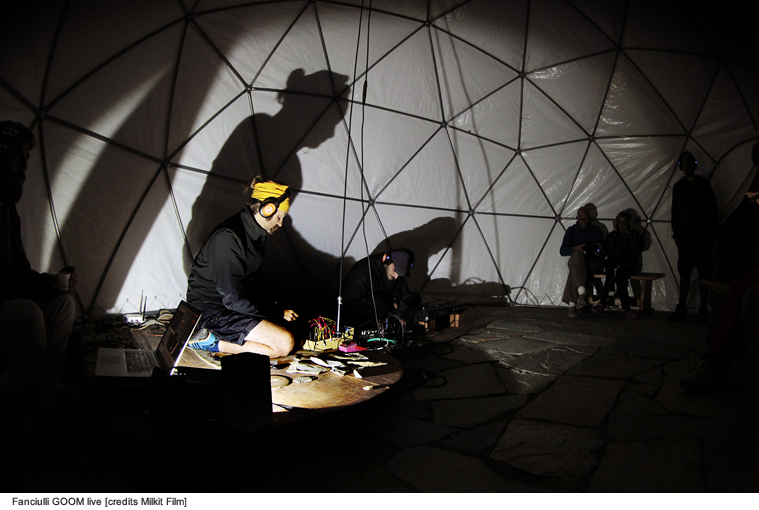 Poetical artistic management. The natural, geographical and historical characteristics of this territory will be the recurring theme of the artistic events.

The guest artists will be asked to take into consideration the obvious limits and conditions which determine the specific qualities of this area and to develop projects which, respecting certain key words such as minimum impact, specificity and sustainability, will be carried out in loco.

Emotivity will be the central characteristic of the programming: artistic contributions which are able to arouse and reinforce the sensation of high altitudes where nature is the protagonist and where the spectators’ minds become ethereal.

Artists with exceptional installation and visionary ability have been invited to participate in this project, artists who, in one way or another, are connected to a mountainous environment.

Respecting both the poetic and ethical design, the artists will develop, in collaboration with the artistic director of a2410, works which will blend into the environmental and the physical conditions which define high mountain areas. 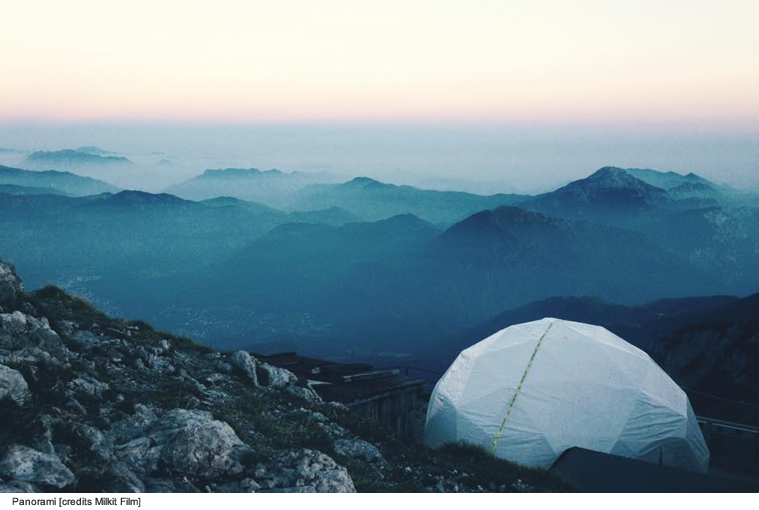 After a trial programme carried out in the summer of 2016 with various exceptional guests (among which the mountaineer Simone Pedeferri, musician Simone Morandotti, Fanciulli Goom, Hangharp duo), the first showing of a2410 will take place from July 17 to July 23, 2017, the project will launch a further stage of design at Rifugio Brioschi. A moment of artistic presence and experimentation at the top of Northern Grid, thanks to Ferrino’s technical support, during which the team of a2410, the artists (Franco Ariaudo, Francesco Fonassi and Maxime Bichon), the project partners and other guests will work Close to a research and development path at 2410m asl.

The design and events week will end on Saturday, July 22, with a “sleeping concert”. Throughout the night, guests can listen to music in the headphones and sleep in the Ferrino Colle Sud Maxi tent listening in the silence of the mountain a musical performance in an exclusive setting.

The event of July 22 will be The event will be on reservation and subscription, with overnight stays, half board and benefits. See below for information.