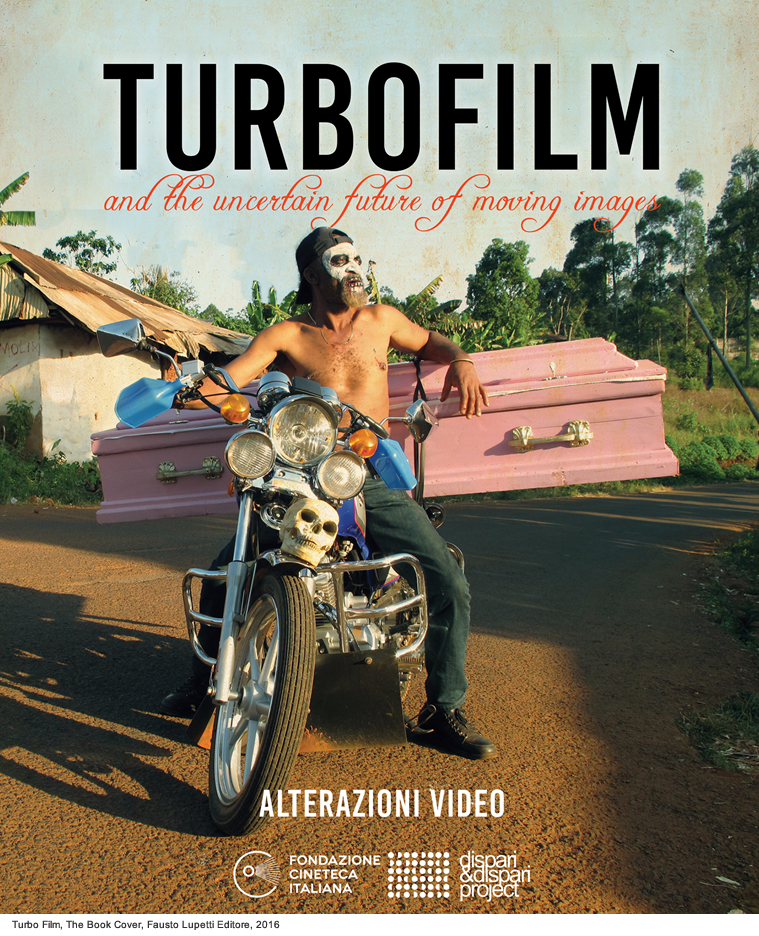 Per troppo amore… Perhaps this text is born from too much love — love for the work and the journey of Alterazioni Video. Perhaps it comes as a result of the last three days spent in close contact with Giacomo and Caffa — I guess it’s my way of processing them. Or perhaps this text simply emerges as a celebration of one of those nights that never seem to end, that sail against the wind from place to place (how could I forget Dusseldorf’s Club Kulisse?), from person to person (ask around for Roman), and from situation to situation (best to leave it at that). Those are the nights that you know will stay with you for a while.

If I cast my memory back to the last few hours, maybe my travel companions and I all stumbled into one of Alterazioni Video’s Turbo Films. To tell the truth, I didn’t see any videocameras, but who can be sure? After all, I always suspected that Giacomo, Caffa, Paololuca, Masu (and Matteo)’s creative process was based on an element of improvisation, of situationism rather than performance, of vitality, of emotional afflatus. Their approach is far from the standard concepts of writing at a desk, pre-established stories, scripts, plots, formats. In a Turbo Film, things happen on their own. Of course you do get the feeling that somebody has given them form, meaning, purpose. This is not creative chaos, ladies and gentlemen — this is art. Plots unfold, they get wrapped up in themselves, and they untangle themselves. They improvise, drawing people in: some are aware, others are not. You never know where they may end up, and you know even less about how they’ll get there. They capture you and they captivate you, because as a viewer, you have the clear sensation that even the very authors were captured and captivated before you.

Turbo Films revolve around sharing, networks, and communities, participating in an artistic project: they are self-produced, thriving on small budgets and field experience. They focus on collective spaces, new forms of participation, and, indeed, on situationist activism, which is fine-tuned film after film, production after production. This is the clear sensation that one gets from the chronological development of each production: from the footage in the style of Alberto Grifi from Artists’ Serial Killer in 2008 to the brand new Rottensharks which has not yet been released (but which will be dealt with in detail in this catalogue). The process has become increasingly refined and precise.

Alterazioni Video have always defined themselves as an open platform, rather than just a group of artists. And come to think about it, the particularity of their work is visible even in this definition: never self-referential, proudly activist, often tangential to the closed circuits of contemporary art. At the same time, their work attests to their continuous reflection on hot topics and pivotal events from the last few years (from the Occupy Wall Street demonstrations that set the scene for Blind Barber, to the immigrant tragedy in Lampedusa of Black Rain; from the worldwide economic crisis and the contradiction of the new digital currencies as explored in Surfing with Satoshi, to the multiple veins of modern capitalism as in All My Friends Are Dead). Their films seize the opportunity for analysis provided by a ‘different’ narration of urban, architectural, familiar places and settings which they hold dear (from the ironic and bloated Berlin in FreD, to the Milan which straddles Fellini and Brass in Hotel Milano; from the multiracial Paris in 2012 vote pour moi to the offended and disfigured Sicily in Per Troppo Amore).

The Turbo Films aren’t exactly documentaries, in the same way that they are not simply examples of bluntly mediated activism. They are something else; they are all of this and so much more; they don’t just need a manifesto for the sake of it. As far as I’m concerned, they are ‘simple’, artistic forms of narration translated through film, which proves to be functional for the purpose.

Take note, however: my deep respect for the work of Alterazioni Video resides in the very use of the term “simple”: the art of the story, which aims to be brief and cutting, through strong, ironic, and often kitsch visual elements which neither sugar-coat the content nor anaesthetise the viewer. Their characters often push the boundaries of the credible, but are rendered with the softness of a wise and delicate use of framing, scenography, and lexicon. They possess the ability to revitalise peripheral places, the ethical conscience to put them under the spotlight, the care in giving dignity to subjects which are often forgotten.

To make a Turbo Film, talents which surpass mere artistic ability are required: each Turbo Film is a tribute to life, and a change in perspective. In conclusion, it is an experience that passes from who acts in it to who films it, then straight to the heart of who watches it.