Today  we  live  in  a  globalized  world  that  is  controlled  and created by digital codes. From communication to transportation (of  people,  goods,  and  messages),  everything  is  guided  by codes.  A  new  equation  between  mathematics and  electronics has  created  a  new  tool-based  world,  erected  by  engineers, physicists, and programmers.

From the binary code (Leibniz) to Morse code, from cosmic code to the genetic code, we live in a world of codes. This exhibition, a  collection  of  artworks  and  scientific  works  gives  you  the opportunity  to  understand  this  world.  It  will  be  a  code-curated exhibition  and  demand  new  behavior  from  the  visitors.

The exhibition will be a mix of a laboratory and a lounge, a learning environment  and  a  “Club  Mediterranée”. Together  with  our visitors,  we  would  like  to  try  out  new  and  perhaps  unusual formats  of  education  and  learning,  creating  new  approaches  to knowledge  in  a  relaxed  and  learning-stimulating  atmosphere. 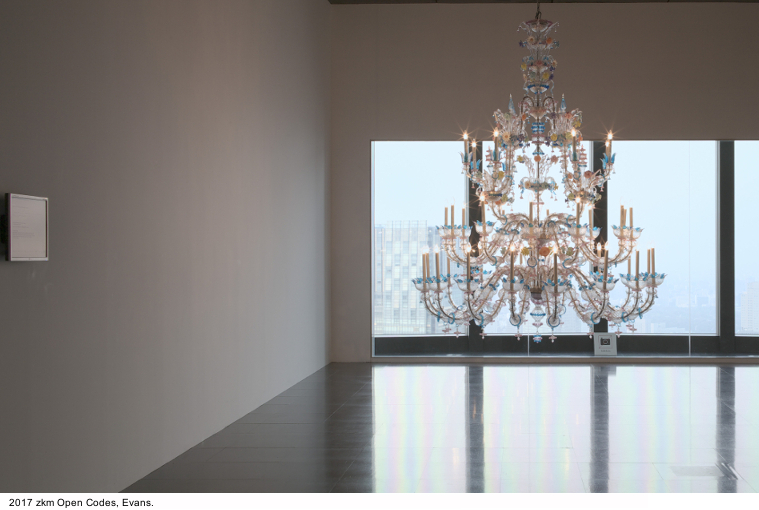 Programming,  learning  with  bots  and  other  new  technologies should  not  be  a  barrier  anymore,  but  should  give  everyone  the opportunity to  understand  the  background  to our  digital  world of today. Whether  with free  entrance  to  events,  snacks and drinks  in  the  museum,  or  public  working  space  available  to visitors  –  as  an  experiment  in  audience  development,  the exhibition  will  change  the  look  and  approach  of  museum exhibitions.

The  museum  will  be  worthwhile for  its visitors  in the truest sense of the word. Artworks  and  scientific  works  based  on  digital  as  well  as  on  analog codes are presented in the exhibition. The works visualize and explain the  complex  dynamics  of  codes,  and  the  way  in  which  they  are increasingly  shaping  the  way  we  live  and  perceive  the  world.  The exhibition analyzes the ingress of codes into our lives, and the structures of  knowledge  they  generate.

The  works  in  the  exhibition  explore  the physical and mathematical principles upon which codes are based and their material implementation in microchips, relays, and circuits. Codes increasingly determine the products we buy, the movies we watch, and they register every move we make anticipating our desires.

In  addition  to  the  presentation  of  historical  precursors  of  computer algorithms, which show the direct application of the binary code, other works deal with the current and future sociopolitical implications caused by codes. Artist represented in the exhibition Cerith  Wyn  Evans  programmed  chandeliers  to  send  out  flashing Morse signals. The Murano glass chandelier, which will be presented, is one of a series of about twenty the artist has created so far. 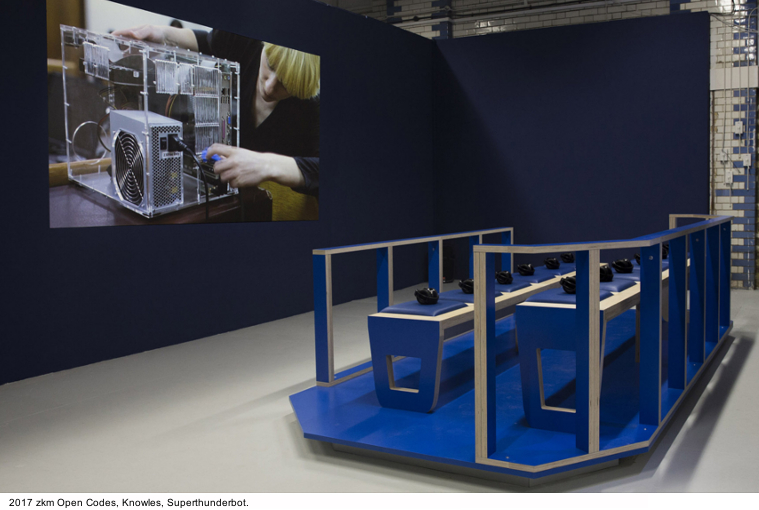 It transmits excerpts  from  the  book “Astrophotography:  Stages  of  Photographic Development” (1987), edited by Siegfried Marx, in Morse code on a flat screen monitor controlled by computers. What happens if human lives are lost due to the actions of a “bot” a set of algorithms? Can a bot be accused in a court of law and found guilty? Is  it  liable  for  its  actions?

In The Trial of Superthunderbot (2016) Helen  Knowles  stages  a  trial  of Superthunderbot, a machine learning agent, which is characterized by its  capacity  to  adjust  its  algorithmic  sequence  independent  of  human supervision.  Five  individuals  have  died  as  a  result  of  the  algorithm’s actions  by  participating  in  unregulated  clinical  trials.

Knowles’  work illustrates  the  fictitious  trial  of  this  intelligent  algorithm,  and raises  the question  of  who  is  accountable  for  machine learning  agents. If a set of algorithms can be accused of murder it can also be put under a spell. James  Bridle, a British artist living in Athens, sets a trap for a self-driving  car  with  Mount  Parnassus  in  the  background. 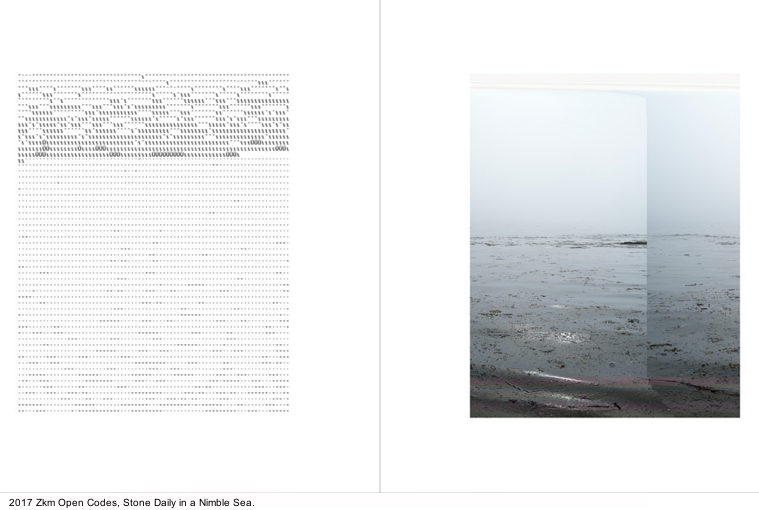 Some  applications  of  binary  code,  for  example,  the  digitization  of financial  systems,  unleash  quite  unexpected  social  phenomena.  In Chinese  Coin  (Red  Blood) (2015) the artist collective UBERMORGEN.COM draws attention to the fact that Chinese coin mining has recently made the People‘s Republic of China the world‘s largest Bitcoin producer.

Mining requires effort and it slowly makes  new  currency  available  at  a  rate  resembling  the  rate  at  which commodities  like  gold,  copper,  diamonds,  nickel,  rare  earths,  silver, uranium, and zinc are mined from the ground. One of the reasons for the fast growth is the buildout of hydropower in the west of the country.

The  collaborating  partners  of  the  exhibition  include  the  Fraunhofer Institute, the FZI Forschungszentrum Informatik, the Akademie Schloss Solitude and the Karlsruher Institut für Technologie (KIT). 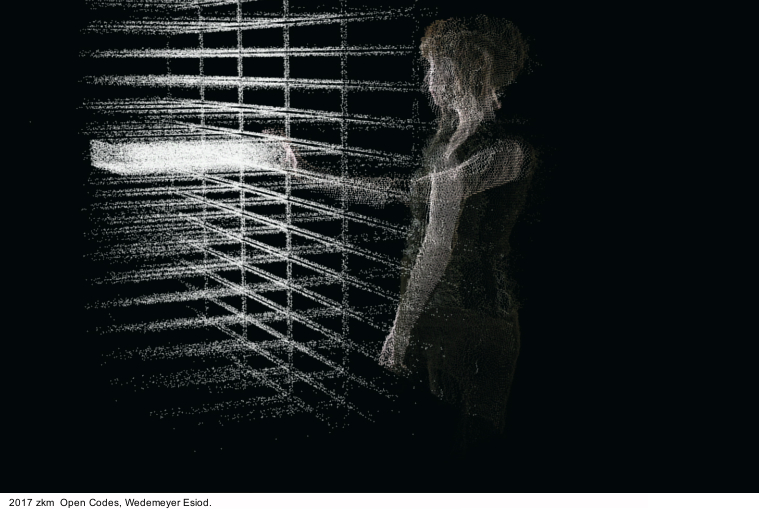 Open Codes. Living in digital worlds is accompanied by an extensive supporting program including lectures, film screenings and symposia. In  addition,  the  ZKM,  in  collaboration with  the  Council  of  Europe,  is organizing  the 4th  Council  of  Europe  Platform  Exchange  on Culture  and  Digitization  on Friday,  October  20th,  2017,  on  the subject of Empowering Democracy through Culture: Digital Tools for  Culturally  Competent  Citizens.

On  Thursday,  November  2nd,  2017,  the  ZKM  will  hold  the panel discussion  Digital  Sovereignty in  collaboration with the Fraunhofer Institute for Optronics, Systems Engineering and Image Analysis, the FZI Research  Center  for  Computer  Science  and  the  Karlsruhe  Institute  of Technology (KIT) at the ZKM_Media Theater. Prominent representatives of  science,  economy  and  politics  will discuss  the  sensitivity  of  digital traces in today’s society.