Curated by Regine Rapp & Christian de Lutz the exhibition series Nonhuman Agents in Arts and Culture takes into account recent philosophical approaches which question anthropocentrism. These discourses emphasise the nonhuman perspectives through object-oriented ontology (Harman and Meillasoux), discuss nonhuman/human encounters (Haraway), postulate a ‘posthumanism’ (Braidotti) and examine various posthuman performative strategies such as intra-acting (Barad). A new ‘de-centring’ lets us draw our attention to a reality that can no longer be described in purely anthropocentric parameters.

Nonhuman Networks current exhibition presents an aesthetics of new forms of communication between human and nonhuman actors. How does the world’s largest single celled creature function as a computer? Can we tap into the so-called ‘Internet of trees’? Performative works act as enablers for the audience to engage in nonlinguistic forms of awareness and contact with several deceptively simple life forms.

Saša Spačal, Mirjan Švagelj and Anil Podgornik combine art, biology and cybernetics to create a platform for inter species communication. In Myconnect the nervous system of a person and fungal mycelium are   plugged into a biofeedback loop. By entering the capsule a person is equipped with a heartbeat sensor, headphones and vibrational motors that are placed on various parts of the body. 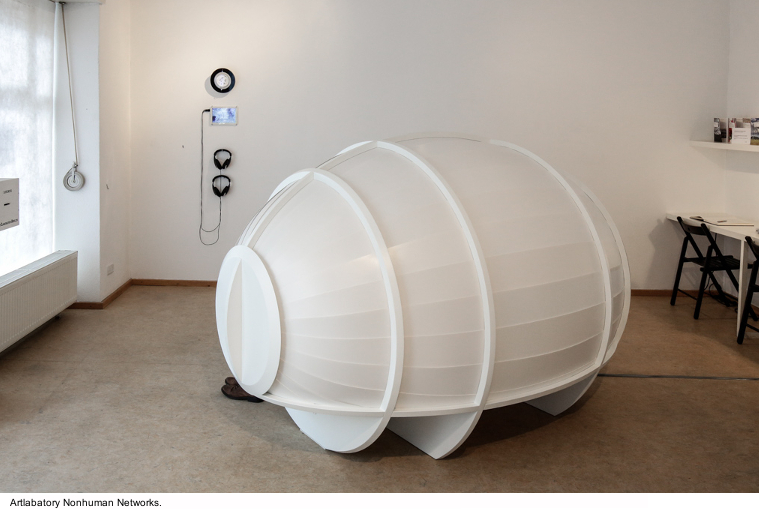 The heartbeat of a person sets the system in motion. The signal travels through the mycelium where it is modulated in real-time. The modulated signal        is transferred back to  the human body via sound, light and tactile sensory impulses. The overwhelming stimuli that affect the nervous system cause an alteration of the heartbeat. A new loop begins and the circle is closed.

A symbiosis of signals begins. Myconnect is a symbiotic interspecies connector that questions the anthropocentric nature/human division. With its circuit of signals and impulses, generated and translated by biological and technological organisms, Myconnect performs an immersive experience of symbiotic interdependence.

Through this experience the technological nature/human distinction can be seen as an arbitrary definition  that serves particular biopolitical interests in human society. The collective has chosen to work with fungi, one of the world’s dominant life forms. Mycelium, the hidden, subterranean portion of mushrooms, can grow to huge proportions; one organism in North America may be the world’s largest living being. 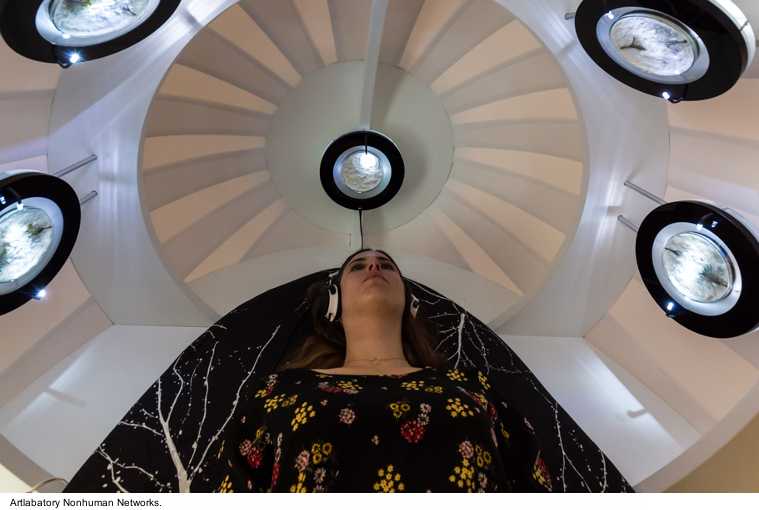 Heather Barnett is an artist, researcher and educator working with natural phenomena and biological design, often in collaboration with scientists, artists, participants and organisms. Utilising living material and imaging technologies, her practice explores how we observe, represent and understand the world around us.

Projects include microbial portraiture, systems modelling, and an ongoing ‘collaboration’ with an intelligent slime mould, Physarum polycephalum, one of the world’s largest single-celled organisms. What makes Physarum polycephalum particularly interesting, is its skilful ability to learn and solve problems from its interactions with the environment. Scientists in Japan and the UK have been studying Physarum polycephalum’s ability for spatial computation (whilst foraging for food in the most efficient way).

These studies mark an interesting turn in cybernetics, which is already strong influenced by biology.  Here an organism is studied as both a technological artefact and agent. Based on years of empirical research and art-science collaboration, Barnett engages the slime mould in a process of negotiated co-creation, resulting in animated films, prints and living sculptures. 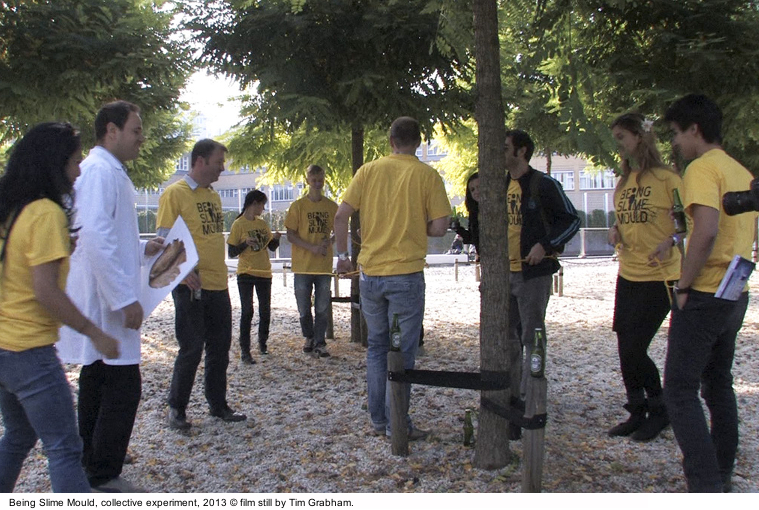 She has also developed a series of interactive public workshops investigating Physarum polycephalum as material, model and metaphor through collective experimentation – Swarm| Cell | City – took place 23/24 September as part of the Nonhuman Agents series, devised in collaboration with the Berlin based collective plan b. This exhibition builds upon her unique combination of interdisciplinary research and participatory practice.