Since the noticeable appearance of Martine Feipel and Jean Bechameil when they represented Luxembourg at the Venice Biennale in 2011, they have continued to show their artistic work internationally while developing it through their own experiences.

From 28 October 2017 until 7 January 2018, the Casino Luxembourg − Forum d’art contemporain is dedicating a major exhibition to the artist duo consisting of a large body of works newly produced for the occasion and united under the title Theatre of Disorder. Curated by Kevin Muhlen. Theatre of Disorder reflects on our contemporary living spaces and investigates their recent transformations due to technology.

Today, robotics and automation reveal a science of movement which goes much further than its mechanical counterpart. Faced with a world where everything works, moves and turns according to its will, rhythm or programme, while being both detached from the rest of the world and taking part in a whole, modernity is put to the test through this ever-increasingly flagrant contradiction between autonomy and alienation. 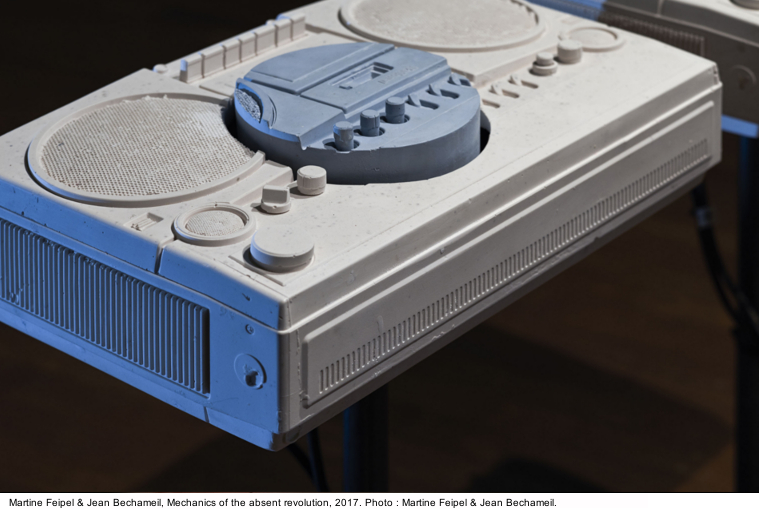 By turning to robotics as an element of our daily lives, Martine Feipel and Jean Bechameil attempt to show how the instruments familiar to us evolve towards a new form of interaction with humans; a choreography in which man and machine coexist, a dance in which the concepts of chance and calculation are continually questioned.

Martine Feipel and Jean Bechameil live and work in Brussels. Since 2008, they have been developing works of art based around a modern downfall facing the contemporary hyper-technological world. In their sculptures and installations, old meets cutting-edge technology, producing a particular universe, a reflection of our society struggling between a persistent tradition and limitless progress.

Through object-symbols of our modernity and by using today’s technology, Feipel and Bechameil aim to reflect this almost melancholic detachment, of each of the elements present, left to their own devices.