Genecraft: Art in the Biogenetic Age

The exhibition forms part of a wider programme at BOM presenting art at the frontiers of science, and has sparked widespread interest with Broadcaster and Professor Alice Roberts (BBC’s The Incredible Human Journey and Radio 4’s The Earth series) tweeting “Art Comes Alive in Birmingham”.

West Midlands-based artist Laurie Ramsell has worked alongside Professor Ferenc Mueller from the University of Birmingham to explore how the zebrafish embryo is being studied in the development of new human cancer treatments. His new sculpture Homodanio B (2017) is made from bacterial cellulose (a strong, moldable substance produced by bacteria) and the artist’s own DNA. It takes the visual form of a zebrafish embryo, currently being studied due to surprising similarities between the human and zebrafish genetic code. 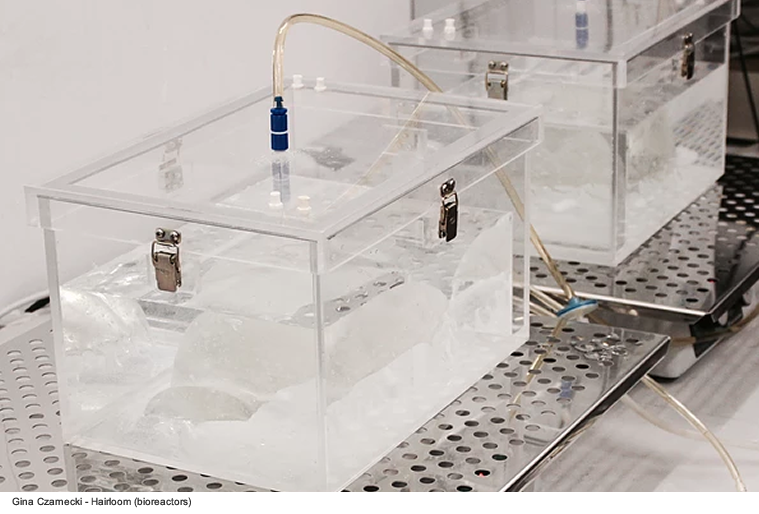 Heirloom (2016-17) is a collaborative artwork by artist Gina Czarnecki and Professor John Hunt from the University of Liverpool. This living portrait uses human tissue cultured from the saliva of Czarnecki’s daughters. Scientifically accurate portraits are created using cell nurturing cocktails. Over  time, the cells reach the thickness of tissue paper. They are then preserved, ‘lifted’ and presented as personalised three dimensional portraits.

Heirloom could lead to new developments in reconstructive and cosmetic surgery. Perhaps in the future we will add 3D body scans to bio-banks, along with samples of our cells. Then, when needed, 3D structures could be regrown, a kind of transplant from our past bodies. An heirloom that parents might decide to leave for – and from – their children.

Heirloom and Homodanio B use biological materials to re-think sculpture and portraiture in the biogenetic age. The artworks ask important questions about ethics and the quest for human survival as we race towards a future of predictive diagnoses and personalised ‘genomics’ medicines in just a few years’ time.