Renick Bell is a computer musician, programmer, and teacher from West Texas but has lived in Tokyo since 2006, where he is a graduate of the doctoral program at Tama Art University and previously was a doctoral student at Denki University. He has a Master degree in Music Technology from Indiana University and an interdisciplinary bachelor’s degree in Electronic music, Studio Art, and Philosophy from Texas Tech University. His current research interests are live coding, improvisation, and algorithmic composition using open source software, inspired by Alex McLean’s “Making music with text(ure)”.

He is the author of Conductive, a library for live coding in the Haskell programming language. He has performed in many countries and he is considered as a pioneer of the Algorave alternative music scene, worldwide growing with rave-style events where people dance to music generated from algorithms, through software such as Max/MSP and SuperCollider by artists like Slub and Algobabez.  As an artist, Renick Bell is best-known for weaving intricate electronic music using live code created by a generative music system he built himself to avoid frustration by the restrictive programmes available to process electronic music.

Empty Lake is the 2014’s EP he released through Lee Gamble’s UIQ label. The five tracks have been constructed from the I Ching, as “live coded” performances, completed with videos that offer an insight into Renick’s music-making process with a stream of the improvised sessions. We caught up with Bell ahead of the recent talk Datacracy, algorithmic society and capital control shared by Phase collective at Lottozero  featuring Renick Bell, Federico Nejrotti (Motherboard Italia), Manuel Recoil (Cypherpunk), Claudia D’Alonzo (Net Art and Media Phenomenal professor) and Lorenzo Frosini (musician and philosopher). The talk was followed by his live show at Spazio Materia, Prato. 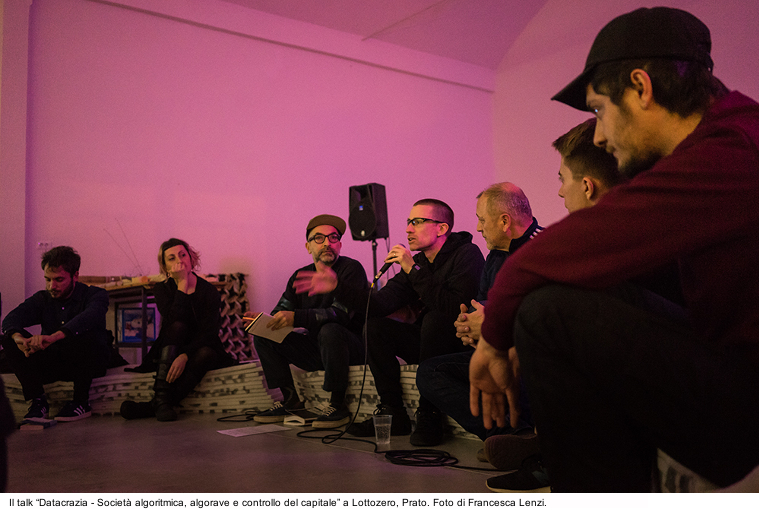 Andrea Mi: Usually, for common people, it’s easy to relate algorithmic to a deterministic context, a mathematical concept that concern machine only. You use algorithmic as a powerful tool for your composition. Tell us something about the idea and the process you use to do it.

Renick Bell: The goal I was trying to achieve in making my software was to allow the operator to become a conductor-pilot. Each component of this vehicle to be piloted requires algorithms to allow it to function. Many of them are deterministic, just as you say. That gives the vehicle the predictability necessary for it to be usable. However, some of the components are designed to surprise, even to surprise the operator.

Andrea Mi: In 2018, algorithms are everywhere. Are they more a danger or an opportunity for our cultural environment?

Renick Bell: Algorithms themselves are not a danger. The danger is in placing trust in those who implement the algorithms; if they are not conscientious enough, the results may be dangerous, such as reflecting prejudice or discrimination in the society from which they come. Algorithms can provide us with so many opportunities, even in cultural environments.

In the best cases, they make things efficient, hide complexity, and democratize the use of difficult techniques. Efficiency comes from the speed with which they can yield answers when used on contemporary computers. Hiding complexity is the results of the steps of the algorithm being contained within a box. By referring to the algorithm as a name and passing it some input, the output can be obtained without needing to know how those results have been obtained.

Andrea Mi: Do you believe that is it possible to think an ethical manner to use the algorithms?

Andrea Mi: Do you think the algorithms can be an extension of the social media “echo chamber paradigm”? Or it is better they become “data with a heart”?

Renick Bell: The echo chamber of social media is definitely the result of algorithmic process in each platform. Rather than “data with heart”, I would think of algorithms as tools we use to make data useful, sometimes bringing the heart of that data to us in a form in which we can use.

Andrea Mi: How you improve live coding and improvisation in your live show?

Renick Bell: I become a more effective live coder by practicing it and by improving the tools which I use to do it. Improving at improvisation is more difficult than improving the tools, but one thing which is fundamental to that is keeping an open mind while performing. Improvising well is in part being aware of unrealized possibilities that exist in a moment and choosing them quickly while that moment is accessible. 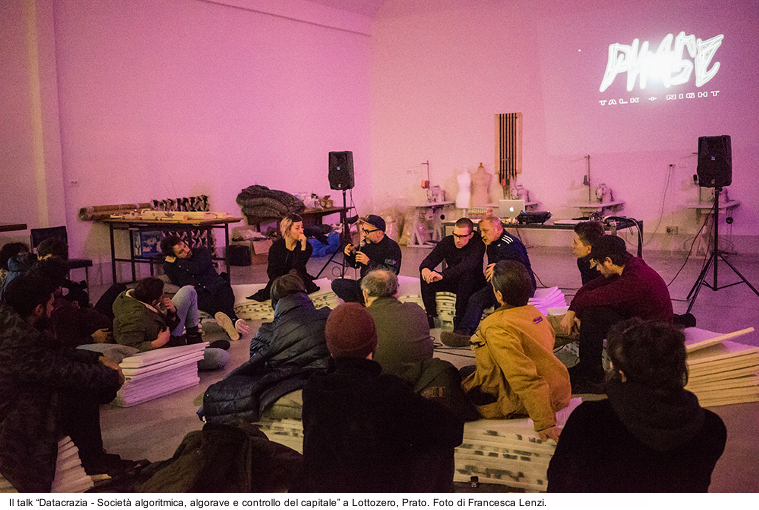 Andrea Mi: Today live-coding and generative design is a crucial matter not only in music making but in any other form of performative art and design process. Which are the main potentials of live coding according to you?

Renick Bell: Live coding allows us to perform with symbol rather than gesture. The ability to use abstraction in performance frees us from the need to gesture but can also allow us to tie complex behaviors to simple gestures. It brings performance much closer to language and therefore all of the advantages that using language gives us.

Andrea Mi: Can we say that live coding open us to a new symbolic communication where we manipulate symbols?

Renick Bell: Yes, this is it exactly.

Andrea Mi: For your compositions you use open source software? Why is so important to keep growing open source culture, from your point of view?

Renick Bell: Open source software keeps us free, and these freedoms are described very well by Richard Stallman and GNU. It is only through open source software that we will be free and responsible at the same time in a modern society which relies on software to function. 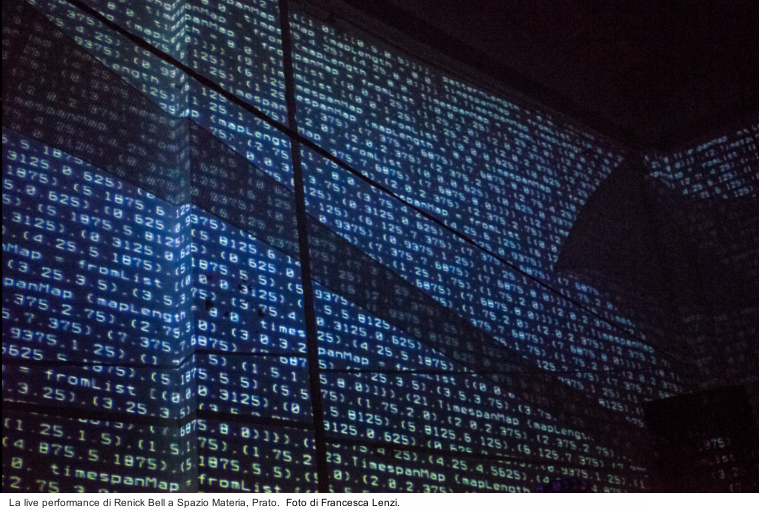 Andrea Mi: If I think about your music I can associate influences like John Cage, free jazz and improvisation. Can you name some more?

Renick Bell: Yes, these are influences. Electronic music heritage is also important, from Lejaren Hiller to the Underground Resistance techno crew. The use of samples in British dance music, particularly jungle, and hip-hop is very important for me. Other important influences are sources of rhythm such as various traditional percussion practices from Latin America, Africa, and India.

Andrea Mi: Can you tell us something you know about Algorave movement?

Renick Bell: The Algorave movement is just that, a movement, rather than a genre. It is a diverse scene of practitioners who share an interest in using algorithms of some type to make music, and feel that exposing process is important. I think the large amount of possibility acquired through algorithms as well as the inclusive nature of the community are helping this movement to grow. 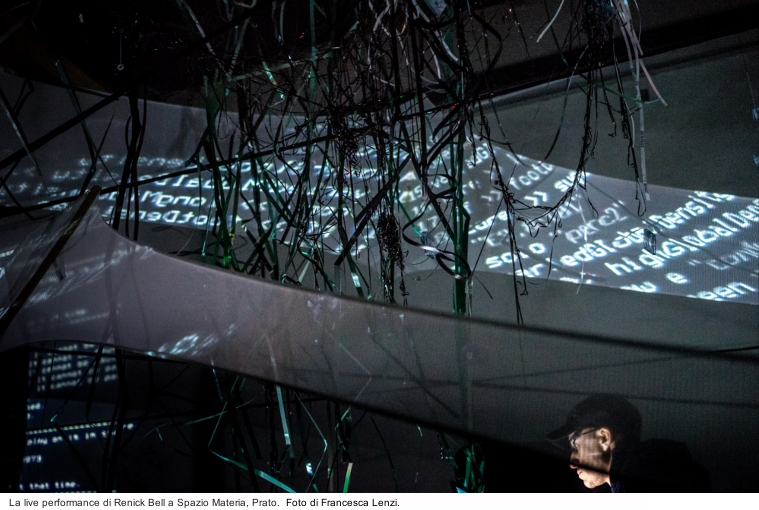 Andrea Mi: Can you tell us what are you working now, and about your next projects?

Renick Bell: Some of the more urgent projects which I am working on right now include finishing a solo album for a label called Seagrave, finishing an album of collaborations for the label Quantum Natives, and developing a collaborative work and corresponding tools with the live coder and choreographer Joana Chicau.