Not only a matter of genes: the human genome on display at MUSE

A few days ago, worldwide media reported on a chimeras-embryo created by inserting human stem cells into a sheep embryo. The experiment was conducted by a research team from the University of California and looks forward to a future in which animals could provide a valuable supply of genetically compatible organs and tissues for transplants. Just a couple of months earlier, 44-year-old Oakland Brian Madeux, suffering from Hunter’s syndrome, a metabolic disease caused by an alteration of genes, went down in history as the first human being to have undergone a process of real-time gene editing, directly into his own body.

These are just two of the most recent examples showing how the hot topics of the scientific debate are able to spread into our homes from the labs of the research centers, provoking no less hot discussions. Media resonance of such news points out two things in particular: first, genomics and biotechnology progress – that goes inevitably hand in hand with ethical and moral problems – is fomenting public opinion at least as much as political or cultural issues; secondly, today more than ever discussing genetics is to discuss the very concept of humanity.

In a similar scenario, MUSE in Trento has just opened the exhibition Genoma Umano: quello che ci rende unici (Human Genome: what makes us unique) for a better understanding of our genetic heritage and its fundamental role in defining ourselves as individuals. The exhibition path goes from DNA sequencing to modern manipulation techniques, including genetic mutations, health prevention and online tests. 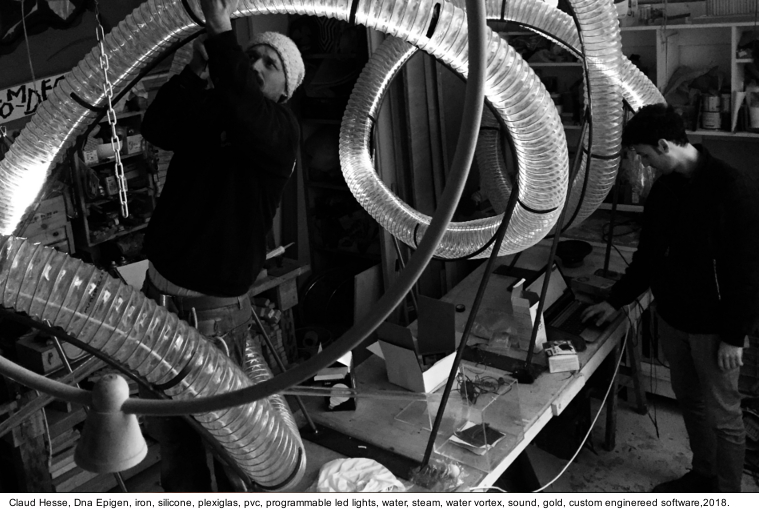 Without ever falling into a science lesson stereotype, Genoma Umano rejects the merely theoretical approach advocating for an involving dissemination, made up of immersion and interactivity; an exhibition where information panels are limited, preferring to offer experiences rather than listing concepts. It is the result of a multidisciplinary approach that combines science, art and digital technologies involving different professionals such as researchers, artists and scientific communication experts. Among them, I reached by telephone Lucia Martinelli, exhibition co-curator along with Patrizia Famà and Paolo Cocco, in the middle of the installing operations.

Exhibition design is one of the first topics we talked about:”… this is a show that, if cannot be defined as an artwork in itself, has certainly an exeptional aesthetic taste” remarked Martinelli. “Architect Lorenzo Greppi – expert in the museum sector endowed with a great scenographic sensitivity – worked on the project, making an extensive use of multimedia, video and multi-projections systems developed with the operational support of the interactive division of fuse* studio among others”.

fuse* interactive, in particular, dealt with the development of software and graphical interfaces for interactive installations. Contributing to the creation of scientific dissemination experiences through art productions, festivals or museum exhibits, represents a fundamental part of the studio’s work, in accordance with one of its main goal: to realize projects with a positive cultural impact on the community. 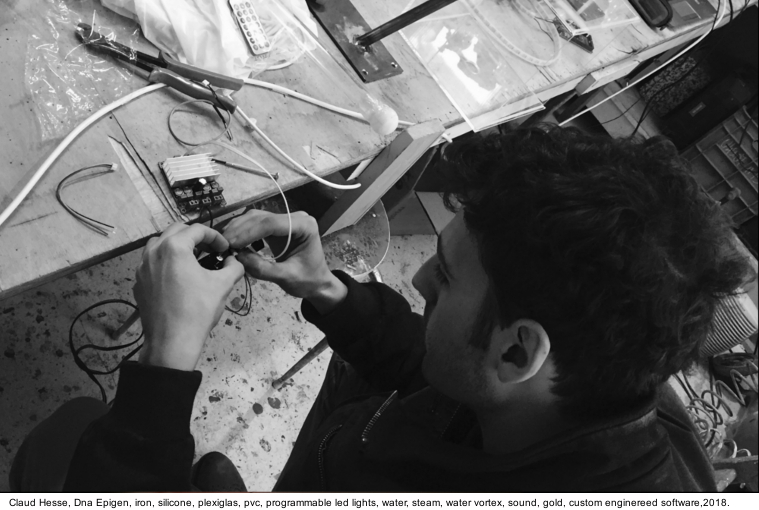 In the words of Mattia Carretti: “As designers, we believe the highest objective we can pursue is for our activity to enrich people’s lives: taking part to an exhibition that will have tens of thousands of visitors, including many children and young people, makes us very happy. The young age of the visitors has been guided our choices concerning the interactive language, also considering that curatorial team needed to express in a simple and immediate way even concepts that sometimes could be very complex.

Therefore our work has focused on the visual and experiential materialization of the educational and informative issues that the scientific committee and curators aimed at conveying through the interactive installations that characterize the exhibition.” The outcome of such a joint work is a path taking the audience by the hand, bringing it to address the most critical genetic issues through experience and play.

Visitors will find themselves in different situations: a supermarket where they can buy a DNA test and reflect on the reason and the implications of their choice; a square with six silhouettes, each representing a subject with a particular genetic predisposition story to tell; and in a lab where they could experiment with some genetic editing procedures, under a Quadrilumi chandelier showing CRISPR-Cas9 – the well-known technique allowing to correct precise DNA sequences – in action.

Therefore Genoma Umano is characterized by a shift of scale: ethical and social problems are addressed by focusing on the infinitely small, i. e. starting from molecules. Also this criterion is embraced by Claud Hesse, an artist living between Italy and Berlin and working at the interceptions between quantum mechanics, genetics and philosophy.

For the exhibition at MUSE, Hesse created DNA Epigen, an interactive macro sculpture reproducing a segment of the double helix: the visitor is invited to select one of six affections, corresponding to six epigenetic experiences – i.e. conditions external to DNA that are able to modify the expression of our genes- from a tablet monitor. Each choice triggers a specific feedback in the sculpture, showing that environment and lifestyles can leave a mark much deeper than we think. One by one this exhibition explores new genomics challenges, also touching on current issues. 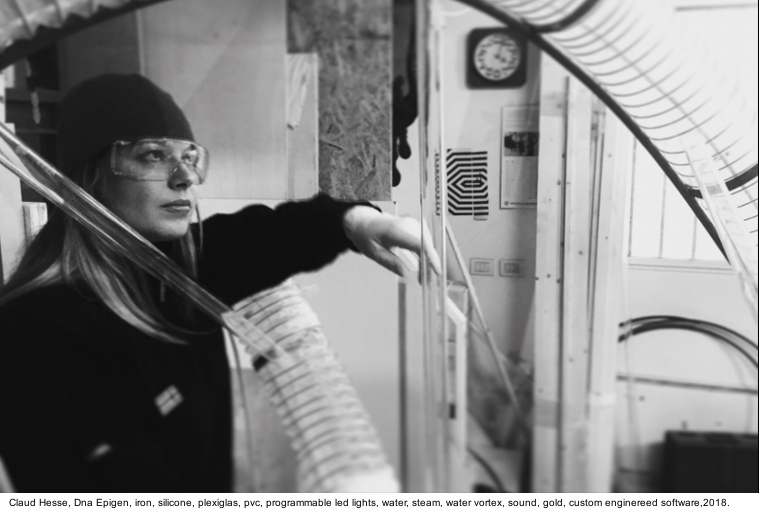 Again Lucia Martinelli explains:”One of the exhibition’s slogans could be: it is not just a matter of genes. The Human Genome Project was not an endpoint, but a new start for a new knowledge: understanding how our genome works, and what the interactions with the environment and the legal, ethical and economic aspects are.

Personally, I curated many projects related to science and society and the impact that biological innovation is having on people and public opinion; as a result, the exhibition includes also a space dedicated to show how the press is dealing with these issues. This section will be constantly updated, since the exhibition will last for a year, and research in this area is proceeding very quickly.”

Therefore it is a way of clarifying these issues and making the progress of scientific research accessible to everyone, but without taking a stand…”We shouldn’t consider science museums as places where objects are displayed, but rather as agora, as squares for the meeting and discussion on the hot scientific topics to take place: this is the real mission of the newly conceived museums and MUSE is one of those. 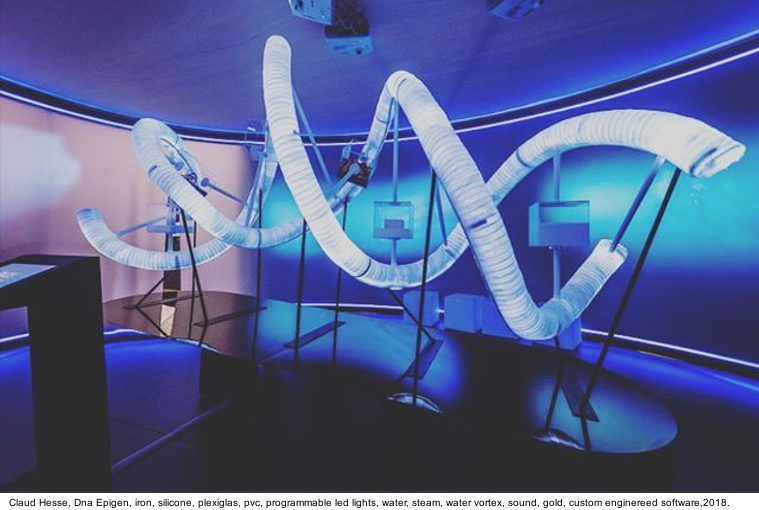 People should visit this exhibition not only to learn notions, but to learn to ask themselves questions and to reflect. They should be able to acquire what is called scientific citizenship: the ability to choose, one day, in the face of a referendum, or a medical treatment maybe, or even just to discriminate between the multitude of information on the Internet, and to understand who to be trusted. It is important to provide the public with the tools to think and discern with their own head.”