Radha May: When the archives disclose the ways of seeing

Until February 2 2020, ICA Milan hosts When the Towel Drops Vol. 1 | Italy,  the video installation by Radha May (Elisa Giardina Papa, Bathsheba Okwenje and Nupur Mathur) and curated by Claudia D’Alonzo. The work is part an artistic rearch that explores the censored representations of sexuality and female pleasure in post-war Italian cinema. We publish here the curatorial text, originally contained in the exhibition booklet. La mostra has been made possible by the support of Fondazione Il Lazzaretto, Milan.

Archives speak in the present not just through past memories: the are places where the instances of the present draw a line between what is considered worthy of being passed on and what can instead be forgotten. It is also why, according to Michael Foucault, archives often speak through what they leave out, remove and omit from archives themselves.

The collective Radha May elaborates film scenes sourced from a sort of ‘archival paradox’: the monitoring of institutional censorship has excluded them from public view, therefore from the archive of collective memory represented by the history of cinema; at the same time, such exclusion has meant that those same scenes have been preserved in the Film Censorship Archive and made accessible today. 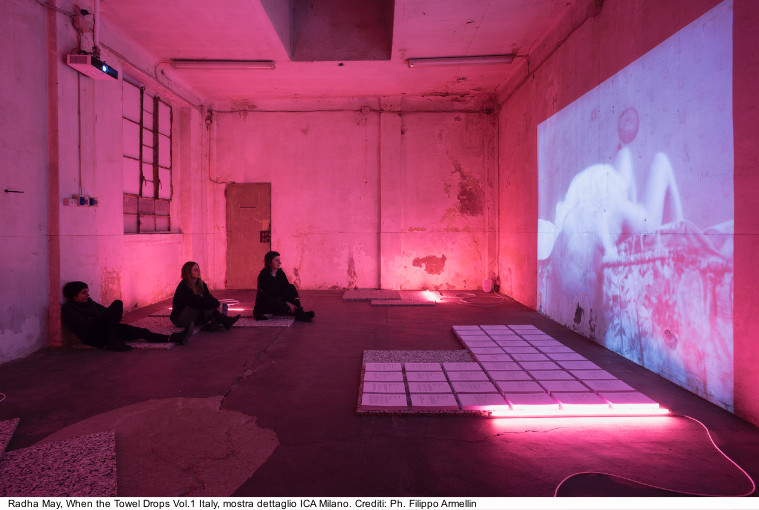 The video installation exhibited at ICA Milan is part of the first volume of When the Towel Drops, realised in 2016 and dedicated to cinema in Italy from the post-World War II period to the ‘60s. In 1962 a law replacing the royal decree of June the 30th 1889, n. 6144, came into force. While the control over shows and movies was previously up to the public security authorities, the new law entrusted the review of films that were distributed in Italy to the Movie Reviewing Committee.

The ‘60s represented a critical moment of transition, given that until the ‘70s the judiciary would have been particularly active in filing hundreds of reports and seizures, as if to compensate for the relative softening of administrative censorship.

The first volume of When the Towel Drops is the result of a research carried out in the Film Censorship Archive, preserved until a few years ago at the Cineteca di Bologna. Radha May sourced from the archive a variety of materials that refer to female and queer sexuality, which are key themes in the research of the art collective. Radha May digitized hundreds of 35mm film cuts with censored scenes: these were physical media that were seized and made invisible to the public, directors and production houses. In addition to the film scenes, the artist scanned entire files that included the transcripts of the Movie Reviewing Committee meetings, the reasons for the censorship and, in most cases, the analysis and detailed description of the scenes to be removed.

Thereafter, the authors worked on the original documents by editing texts and audiovisual sequences, converting both kind of sources into fragments extrapolated from the original discourse, ready to be recombined within the installation environment. 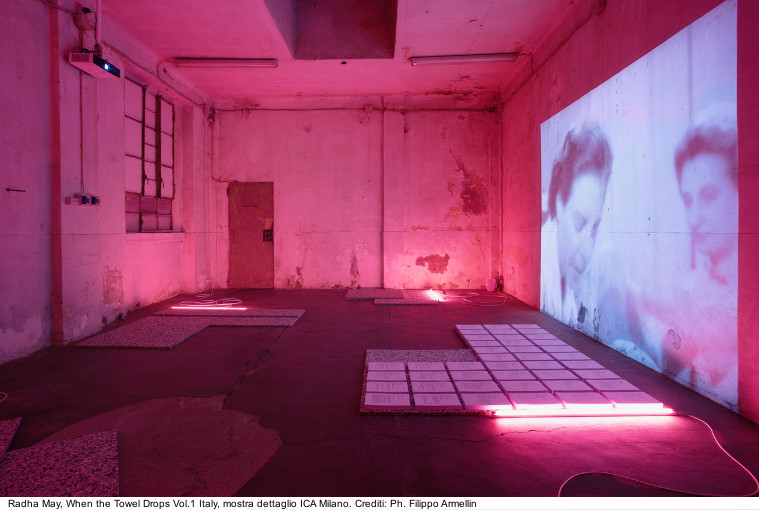 The installation When the Towel Drops is a dispositif that expands such fragments from the original archival documents to new semantic layers. The reintroduction into the present of images that had been censored in the past is not aiming to restore the vision of female sexuality that they were once showing, but to encourage the contemporary viewer to question the ways of his own gaze.

On a visual level, the montage of the scenes – freed from the original narratives and brought back into play purely as images – brings out the reiteration of largely homogeneous postures, actions and settings: female characters strip or are stripped by masculine hands, they show few inches of naked skin, they dance claiming attention, they show off poses that neither historical distance, nor the use of black and white, can make less familiar to our contemporary gaze. There are rare exceptions in which female characters are allowed to express their pleasure, but this is always done to the camera performing implausible postures that kill any spontaneity, or through close-ups that dissect bodies and their integrity as subjects.

In reconstructing a history of the ways of seeing, John Berger outlines a significant difference between the ‘naked body’ and the ‘nude body’: being naked is simply being oneself, while being nude means being stripped and observed by the gaze of the other. To be called ‘a nude’ a painting must depict a body as the object of someone else’s gaze. If nakedness is a revelation of oneself and to oneself, then nudity is staging a performance. Similarly to the tradition of pictorial nudes, the film fragments of When the Towel Drops disclose the true protagonist that is never on stage: the male gaze that observes a constantly surveilled femininity. It is for the pleasure of this very gaze that such representations are created.

In doing so, the images of When the Towel Drops reveal a common thread that runs through the history of Western visual culture, from the establishment of the nude in the painting tradition to contemporary media, by way of post-war cinema. 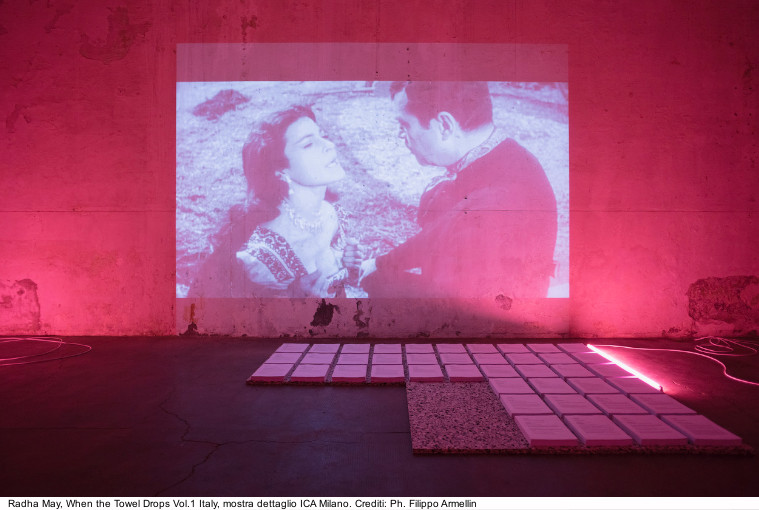 A further semantic layer is that of texts: the installation, in fact, includes reams of sheets with excerpts from the documents of the Movie Reviewing Committee that the viewers can choose, take, read and bring with them. In the texts, the surveillance operated by the male gaze has a double identity: that of the watching subject, that is the censorship committee formed by men, and that of the subject to be protected, the spectator. While it is true that displaying of the female body is designed for the male gaze of the viewer, at the same time censorship controls limits and proportions of what and how much can be shown. The censorship committee takes care of an infantilized spectator, nourishing his gaze according to modes of representation determined by a century-old visually codified morality, so as not to create any disturbance that can make him question his own status as a spectator. It is rather the feminine object, together with its sensual power, to be regulated, as if in a play of “seducing but not too much” that is evidenced in the censorship texts by the frequency of expressions such as ‘too much’, ‘excessive’, ‘too long’ . Texts represent an anomaly for the customs of the cinematographic experience. They not just are the traces of the paths that regulate a film’s life and that generally remain inaccessible to the audience, but also embody the documents left out from the archive of collective memory and reintroduced by Radha May.

The third layer on which the re-semanticising process is played places the viewer at the center of an open and never unambiguous relationship between image and text. Some texts are coherent with the visual level as they describe in detail the cinematographic scenes; in other texts, words are detached from the visual discourse and refer to the narrative, which represents an ‘elsewhere’ lost in the decontextualized images.

The construction of a new, open meaning offered by the work is generated by the gap between image and text, which can be experimented in unpredictable and subjective ways by each viewer. The relationship between the traces of the archive and the censorship that produced them is never testimonial or descriptive, but rather enacted by the viewer within a range of fluctuations between what is shown in the projection and the individual reading of the documents. 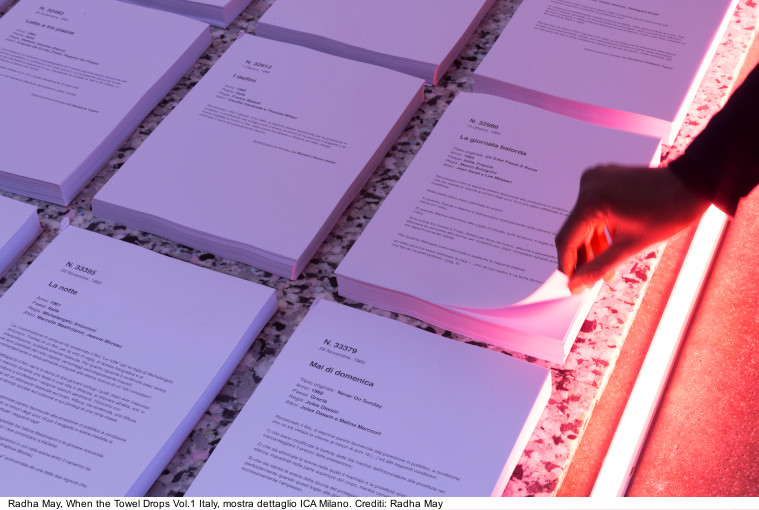 While performing the relationship between the traces of the archive, the viewer embodies the role of the spectator – a position in which he can ultimately feel at ease – but also the much more uncomfortable one of the censor.

By so doing, When the Towel Drops reveals an ambiguous and hidden dimension of spectatorship that seems to question the viewer of the work – whom is also a spectator in the present time – on his own gaze and active engagement with the new forms that contemporary censorship is taking. In fact, today more than ever individual spectators collaborate and participate in the definition of what is acceptable to look at and what should instead be left out because too disturbing, in both old and new places where power can be wielded, from cinema to digital platforms.