From the real to the digital and return. 12CYFEST addresses digital identity in its fickle essence

In a corner of the ID. ART:TECH EXHIBITION at Ca’ Foscari Cultural Flow Zone a glimpsing flickering, twirling luminescence catches the eye of the visitor. It comes out from two large-scale video projections showing a liquid surface in motion, which is reflecting in two mirrors, fashioned in a Venetian gold frame, creating a vibrating chain of visual remanding. The water element is a clear homage to Venice, the city hosting the show, while the mirror play stands for a Narcissus fantasy reinterpreted in digital times. The handsome hunter of nowadays is still obsessed with his own physical appearance and its public presentation, but the mirror has changed: it has turned into a screen giving back just a blurred image, too mobile to fix in a stable construction and, what is worse, not just to its owner, but also to the rest of the world.

The mirror now is two-sided, both a reflection and a filter to access another ontology, a digital, connected, networked one. In this existence our body is absent, while undoubtedly still necessary. We need it to interact with the device, the screen, the headset, whatever, but it is not what defines our identity anymore. Identity itself has changed, it has become an ID, a number, a text, an amount of information. To correspond to our reflection is hard to do, today more than ever. Hands intertwine a symbiotic relationship with tablets and smartphones, an intimate contact made of scrolls and clicks. 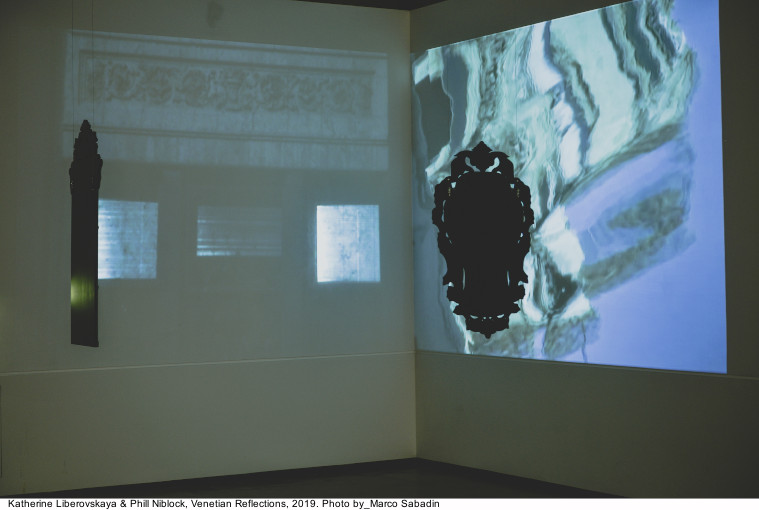 Humanity disappears in a neverending live stream. Visitors could try this experience by interacting with Exaltation (2019), an installation by Serge Komarov and Alexey Grachev made of a PC, an iPhone and a monitor connected with an Instagram account constantly live streaming. Each visitor passing by the work is captured by the camera and transmitted online, becoming part of what is visualized as a bottomless digital tunnel in which self borders dissolve in a cloud of emojis and notifications, and the concept of identity completely loses its meaning.

ID is a broad, multifaced concept art has addressed since the very beginning of times. The ID. ART:TECH EXHIBITION intends to delve into all the different shades and meanings it has acquired in our digital present by juxtaposing new media art and technology with contemporary portrait paintings. The paintings on view come from two specific collections: the Frants Family Collection and Kolodzei Art Foundation, both focused on Russian and Soviet Nonconformist art. These portraits are all from the post-Stalin Thaw in the ’50s, embracing a Western modernistic aesthetic to find an alternative to Social Realism. They reveal more about the artists who made them than about their subjects, testifying a period when ostracism was the price to pay for an individual to be free, and the question of identification was more urgent than ever. 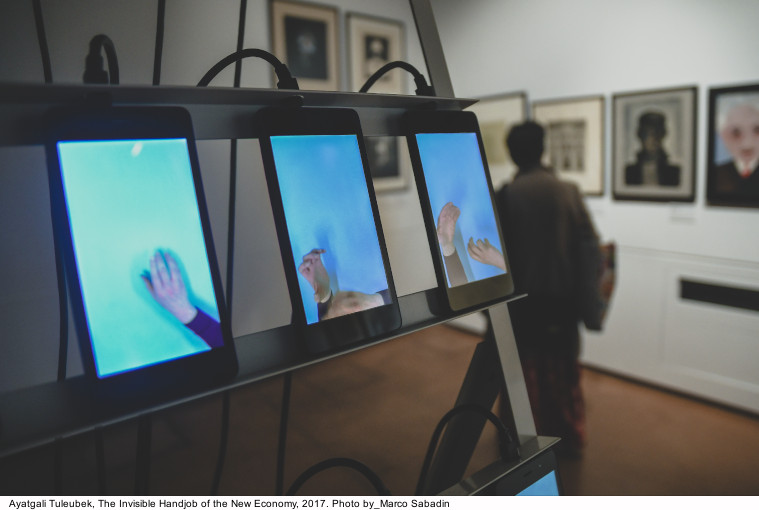 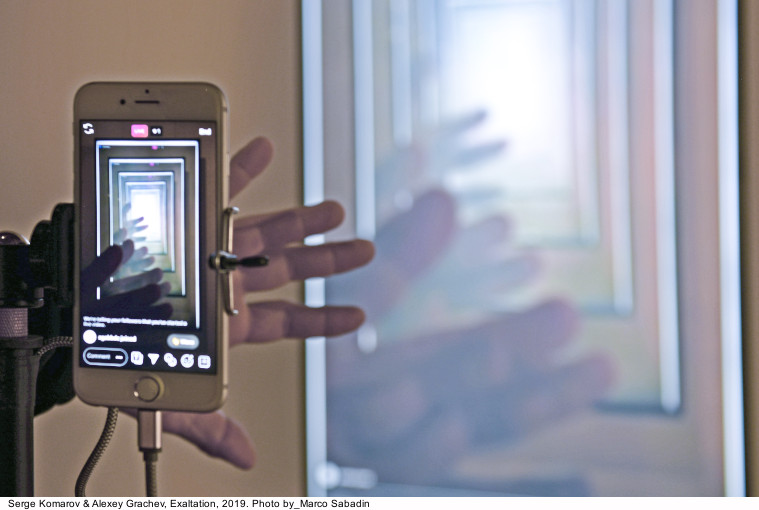 Such Russian element is not by chance, this show being part of the 12 edition of CYFEST, the main art and tech festival in Russia organized by independent Cyland Media Art Lab  which in view of its upcoming edition in St. Petersburg in November is now touring in Italy, presenting works of international artists of different age. Together, works on display reflect the choices of the 5 curators involved: Elena Gubanova, Anna Frants, Silvia Burini, Giuseppe Barbieri, Valentino Catricalà, William Latham, and Lydia Griaznova.

Therefore, among artworks by Russian artists wich are strictly connected to Soviet media culture like the A-13-40-25 (2019) installation by artist and curator Peter Belyi, St Sebastian 24 Hours a Day (2019) by Alexander Terebenin, or Marina Alekseeva & Vladimir Rannev’s In Chocolate (2019), you can find also a new video installation by the Italian Daniele Puppi, and a photographic series by Karin Andersen.

While Belyi steps back to the first technology displacing identity from the body with a two old lead telephones installation that brings back to life the state of anxiety surrounding the famous call Stalin made to Boris Pasternak in 1930, Terebenin employs found objects from a former Soviet military academy to make a contemporary icon of martyrdom, and the duo Alekseeva & Rannev set up a kind of a magic lantern where traditional Russian characters move and sing in augmented reality on the surface of a chocolate fountain. Hanging on the near wall, Andersen’s Naughty Messy Nature (2019) shows fungi mould transformations of some vegetal materials as an autonomous sculpting project, evoking uncanny features of uncertain species. 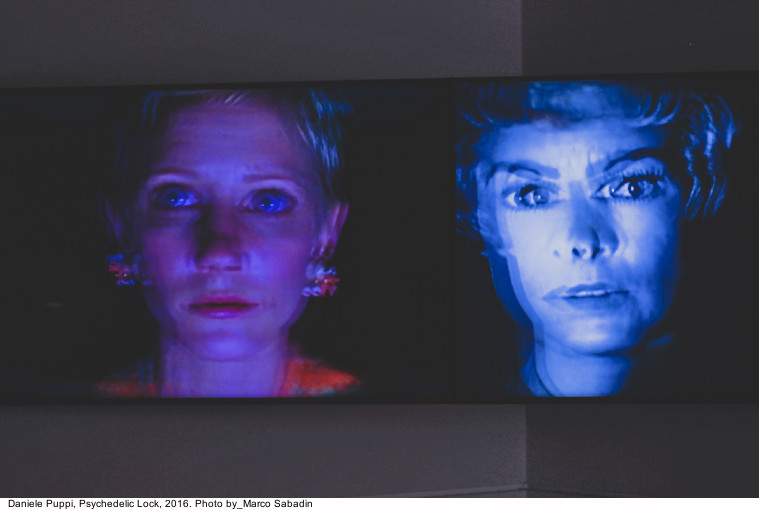 In the near room, Puppi’s Psychedelic Lock (2016) shows a movie frame bouncing from one monitor to another with a rhythmic sound, passing from a black and white state to a colored one in an apparently neverending Ping Pong game: a hypnotic, frustrating rendering of our identities’ splitted nature, always divided in two physical and temporal dimensions. The attempt to settle back in one or another is condemned to failure, as it is well argued by Belgian artist Alexandra Dementieva with her media installation Twin Dephts (2018) embodyng a real time romantic attempt to return into human’s natural realm, again water, of course.

Together with Natalia Lyakh‘s Unforeseen Obligation YX7913XY (2019) and Jake Elwes’ CUSP (2019), both revolving around the liquid element, this video recalls the artwork we analyzed at the beginning: its name is Venetian Reflections and the water luminescence are made of close-up sequences of Venice buildings reflections into canals from the watercolors Katherine Liberovskaya and Phill Niblock made during a residence program at the Emily Harvey Foundation. 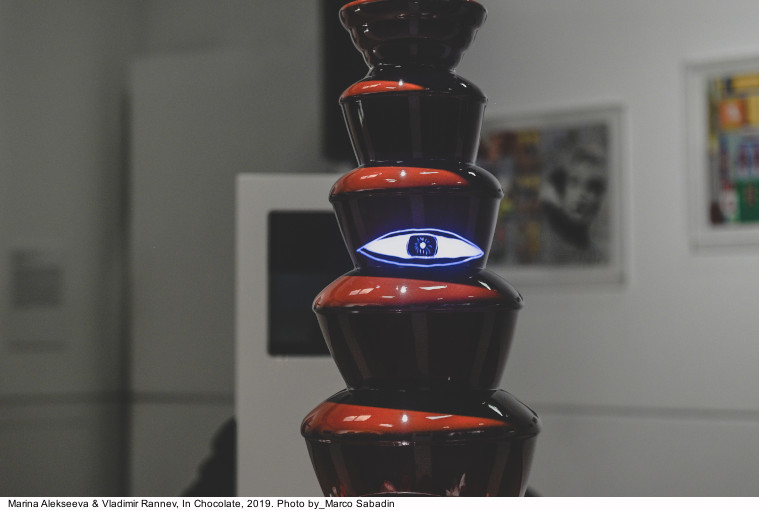 Real or not, this shining surfaces makes Narcissus features not just impossible to fix, but also deceitful: as in Elena Gubanova & Ivan Govorkov The Enlightened One (2019), a sort of wooden workout machine where physical exercise is aimed at disclosing leaves of a lotus flower which contains nothing but another mirror. Once get to the point, a flicker of light blinds the user, making it impossible for him to see his own face.