The Paramount Movie Studio in Hollywood is famous for films like Breakfast at Tiffany’s and Vertigo, since the 1960s, and for many popular TV series including Glee, NCIS, and American Horror Story. For four days, February 14-17, 2019 the movie studio was the location for the inaugural edition of the Frieze Los Angeles Art Fair. With a goal “to explore how art can bridge the worlds of patronage and civic engagement,” it attracted 30,000 visitors, including celebrities, art professionals, collectors and the public.

The Fair was modest, presenting 70 galleries (including many from Los Angeles) and 16 Projects. Additionally, talks and a film and music program extended the Fair’s reach into the city’s art community. It will be debated endlessly how the attendance, deemed minimal by industry standards (a film’s opening weekend could easily boast 10 million), is considered a very successful venture by artworld standards. Perhaps because many galleries reported financially successful sales figures. The major sale was the late LA based Mike Kelly’s installation “Unisex Love Nest” (1999), sold by Hauser & Wirth to a European collection for $1.8 million. 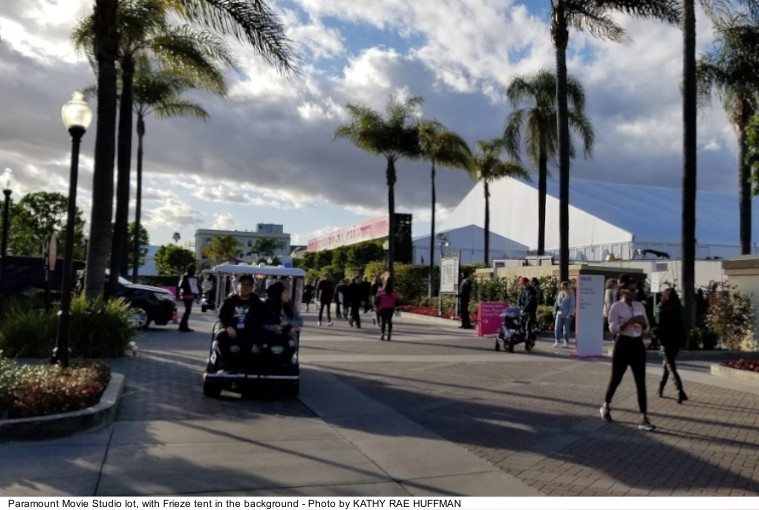 The euphoric, intense pre-fair news and hype predicted the glitter, fashion, and the wealth that were on display. A sold-out event in Los Angeles is considered an exceptional public response, and Frieze LA achieved this on the first open day for the public, even with no parking, heavy rain and internet-only ticket sales starting at $80 (tickets were a bit cheaper for the back lot only, but that also sold out on Saturday).

By being in the heart of Hollywood, Frieze attracted numerous VIP invitees who could be noted jumping queue and then transported by golf cart directly past the gallery tent to the special VIP Champagne lounge. And, unlike a major exhibition opening or feature film premier that produces strong memories and opinions, in retrospect the Fair was a quick here today/gone tomorrow flash event: a mere moment on the cultural calendar of LA, but one that promised to bring international attention to the phenomena of the extensive and diverse Los Angeles art scene. 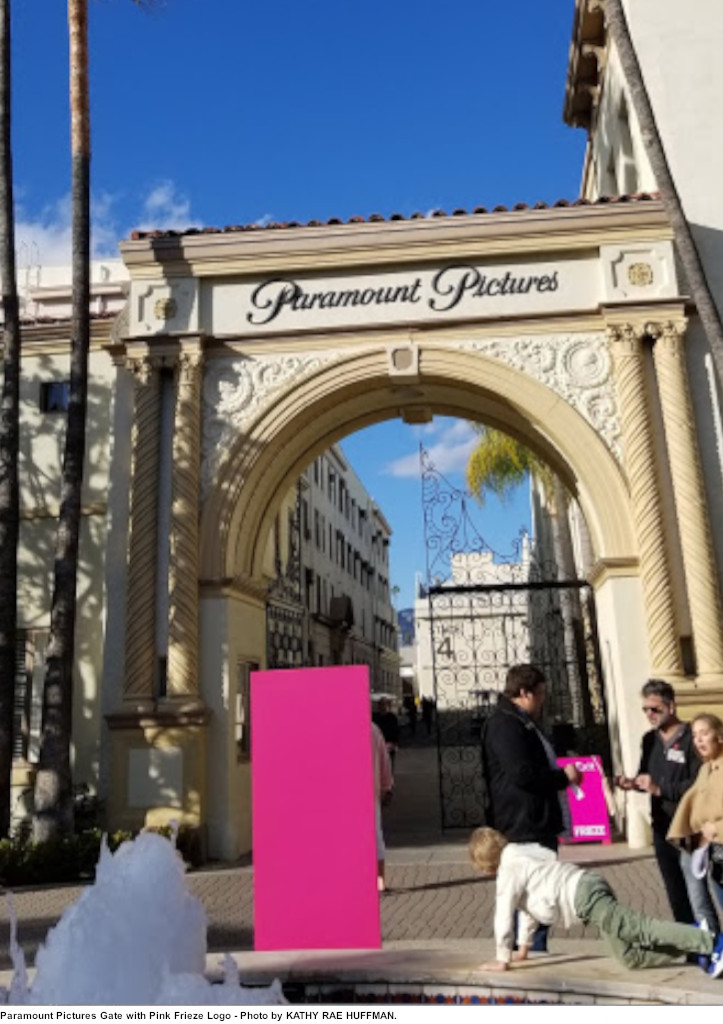 Produced and managed by industry-savvy organizers “Endeavour“, a longstanding Hollywood talent agency, Frieze LA added to the frenzy of “award season” that celebrates The Industry (the TV and movie business). Because Frieze LA also hoped to unite the art world with Hollywood, a decades long effort for many prominent LA arts institutions, it purposefully engaged with the wider art scene, and even offered several city-wide art gallery tours led by artists. These were offered for specialized audiences and cost around $250 each.

Frieze LA infused energy into the city’s “other” art fairs, bringing an international audience to the city’s newest fair “Felix” (at the Roosevelt Hotel) and in LA’s longstanding LA Art Show (at the LA Convention Center) and ALAC – Art Los Angeles Contemporary (at the Barker Hangar in Santa Monica). LA’s several art fairs were held around the same time and enjoyed the presence of the internationally famous Frieze brand.

LA’s artworld has competed for attention from Hollywood for decades. Art institutions are now also destinations, popularized by online engagement with social media, including Podcasts, Twitter, Instagram, and Augmented Reality. Lectures are streamed, archives and artworks are made public, and interviews, opinions and visitor feedback are available on websites. But this also leaves arts institutions open to manipulation. 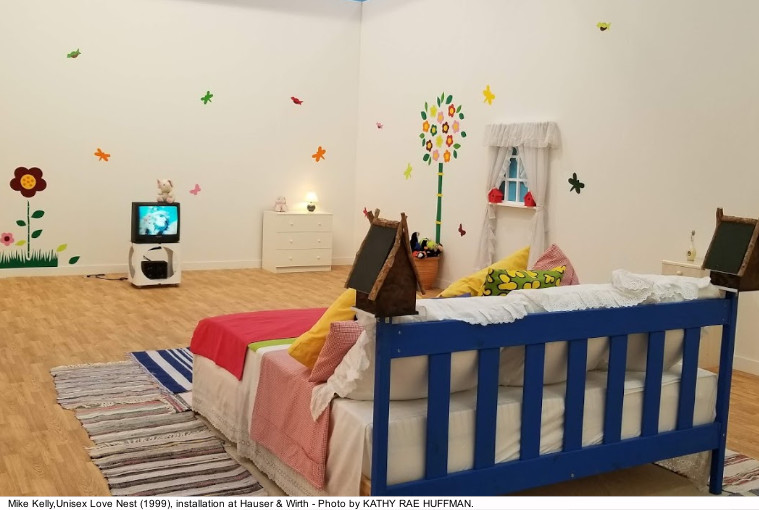 One outstanding intervention at Frieze LA was the work of uninvited LA artist Gretchen Andrew, who hacked herself into the Frieze domain by optimizing image search engine strategies, excessively copying her work with a look-alike digitally generated “Frieze” carpet in the background. She successfully became the image search winner and bypassed any physical presence in favor of being a virtually exhibited artist. Outside the spacious gallery rows of white walled pristine gallery booths with their selected ‘saleable’ pictures and objects, Frieze Projects, a curated section, was located on the backlot, utilizing this make-believe New York neighborhood and walking district.

Sixteen artists comprised Frieze Projects, with artists selected by Ali Subotnick. A former Hammer Museum curator, Subotnick was considered to be one of the most 25 most influential female curators in 2016. Project artists were mostly (but not exclusively) commissioned, and mainly (but not all) were LA based. With one exception, Projects were presented in collaboration with a commercial gallery. The Paramount backlot was transformed into a neighborhood street fair, a pedestrian area with artworks cited throughout, inside buildings, in alleyways, and on building facades. Pop-up shops, themed bars, and unique restaurants as well as special performance events were scattered around the streets and in doorways, which created a cozy atmosphere more common to Europeans and Angelenos who live in ethnic neighborhoods. 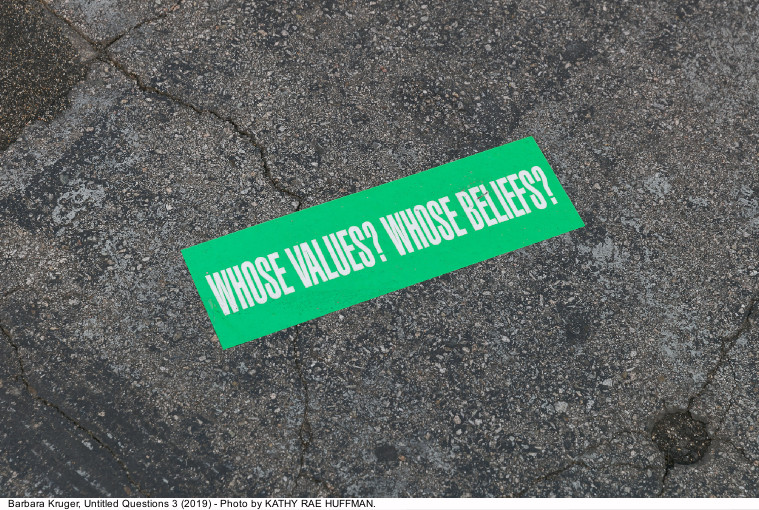 Artworld heavy-hitters Barbara Kruger (Sprüth Magers), and Paul McCarthy, (Hauser & Wirth), were prominent and visible. Kruger created 20 different text-based stickers, positioned on the ground to guide visitors from the gallery tent to the backlot. “Is there life without pain” being an example. Reportedly, these stickers will also be placed in and around arts institutions in the LA area, expanding the audience for this work.

McCarthy’s iconic Daddies Tomato Ketchup Inflatable (a work from 2007, so it obviously was not commissioned by Frieze) was visible from most points in the backlot, and it was accompanied by his smaller, sassy Bossy Burger (1991). This work references some of the artists’ early and infamous LA performance works that featured ketchup as a typical movie stand-in for blood and gore. 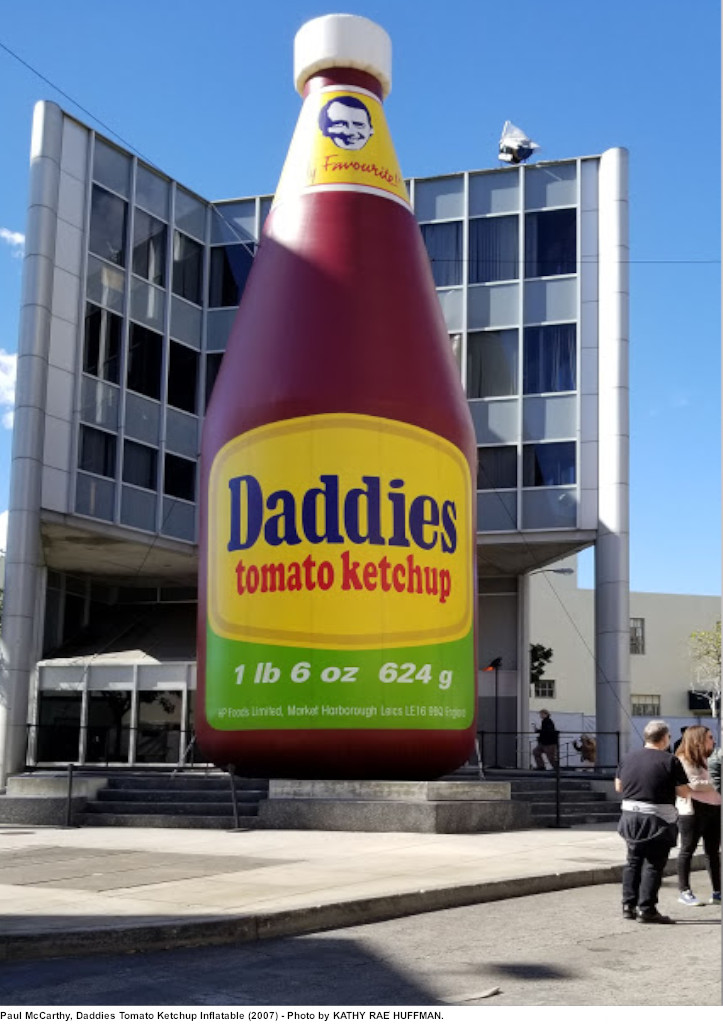 Among the works commissioned by Frieze, there were many not so well-known artists, including LA based Hannah Greely (Parker Gallery), who had her first one-woman show in 2017. Greely used the air space between buildings to hang painted elements on washing lines. Her work High and Dry resonated well as a make-believe neighborhood element.

Easily missed, Hawaiian born LA based Cayetano Ferrer’s Psychical Apparatus Neon seemed to be part of the movie-set architecture.  And presented by the Koreatown gallery Commonwealth and Council, it fused the way signage works with animation in the urban landscape of LA and compressed many ideas into a single statement. 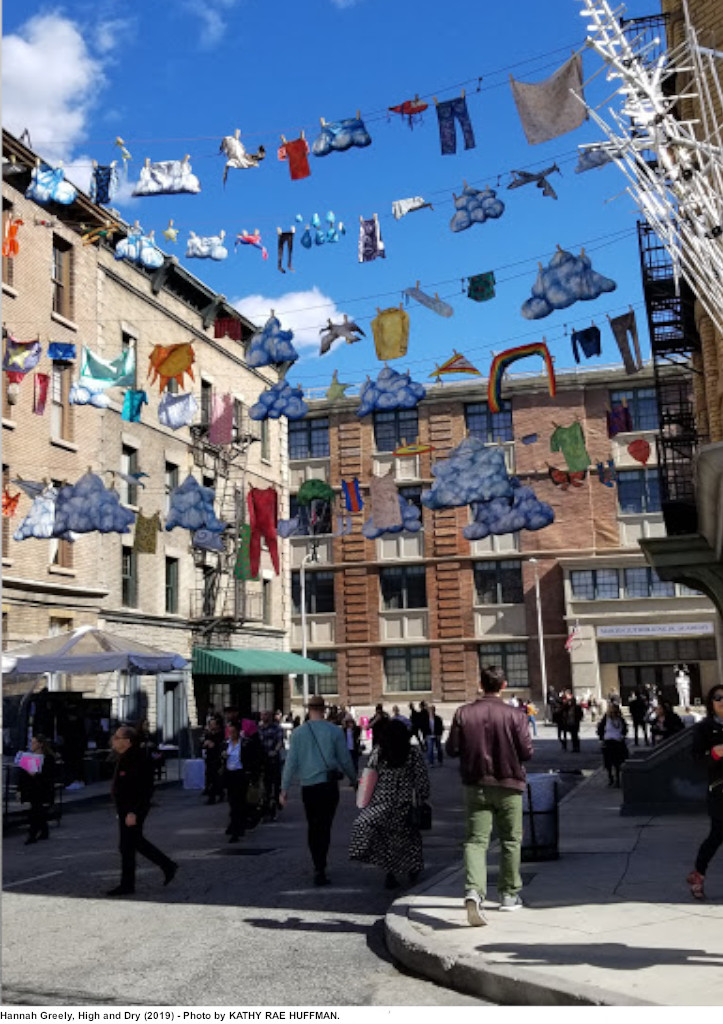 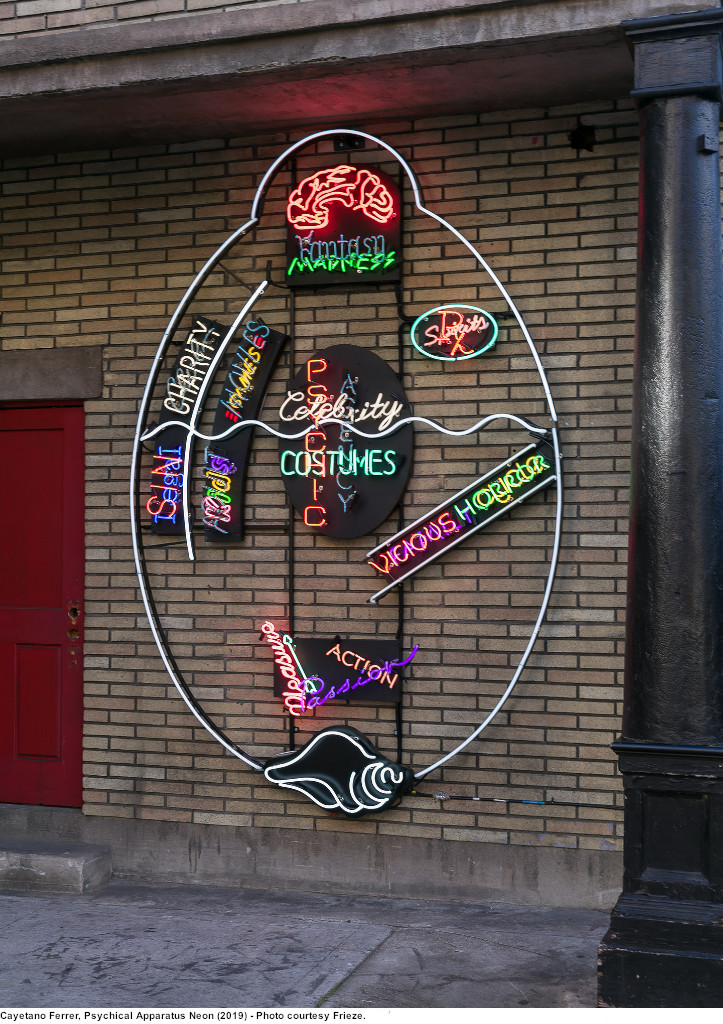 A compelling, political and timely commissioned installation was Game by Karon Davis (Wilding Cran Gallery). The Ojai based artist and her late husband Noah Davis, co-founded LA’s Underground Museum, a multiyear project created in association with MOCA as a space for dialogue, especially with racially diverse artists and audiences.

On the front steps of an administrative style edifice, several white, plaster cast human scale figures are strategically placed, each sprouting a set of antlers. A placard over the entrance reads: ‘Martin Luther King Jr. Academy.’ Game directly references school violence, and although the figures portrayed transcend reality, and perhaps are even immortal, they have no defense if targeted by hunters. I was informed by one of the artists’ assistants that the work had been sold to The Hammer Museum.  Well done! 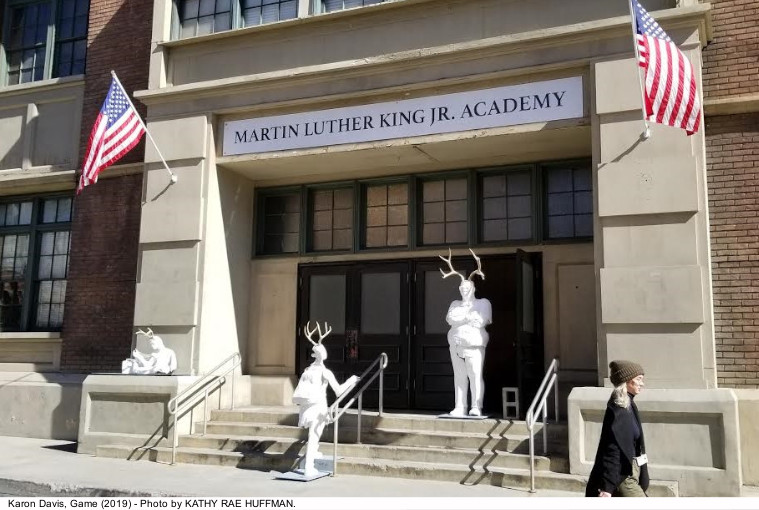 Another work that deserves mentioning, is an homage to Eugenia P. Butler, who died in 2008. Kitchen Table, (1993/2019) was revived by Butler’s LA based artist daughter Corazon Del Sol, The Box, and Butler’s estate. The single channel video work documents several conversations around meals to which Allan Kaprow, John Outterbridge, Carolee Schneemann, Suzanne Lacy, and Joan Jonas (altogether 26 artists) were invited by Butler to participate 26 years ago during an earlier LA Art Fair. Kitchen Table is a fascinating document that brings those earlier conversations into the present, with a new performance added by Del Sol. It was also given space inside the Frieze LA Art Fair at The Box’s gallery booth.

There was very little attention to digital media art at Frieze LA, aside from a few commercially viable digital prints and a few flat screen video works, but the Frieze LA talks program contributed several important “conversations on patronage.”

rganized by Hamza Walker, director of LAXART, a non-profit art space in the Hollywood Gallery Corridor, one talk was memorable. ‘Evolution of the Human: Art in the Age of AI and Synthetic Biology,’ was presented by the Berggruen Institute, Beverly Hills, a place which honors “thinkers whose ideas are of basic importance for contemporary life”. Moderated by Tobias Rees, founding Director of the Institute’s Transformations of the Human Program, it offered presentations by Polish born Agnieszka Kurant, an artist-in-residence at the Institute, and by Drew Endy, a professor at Stanford University who works with the Berggruen Institute. 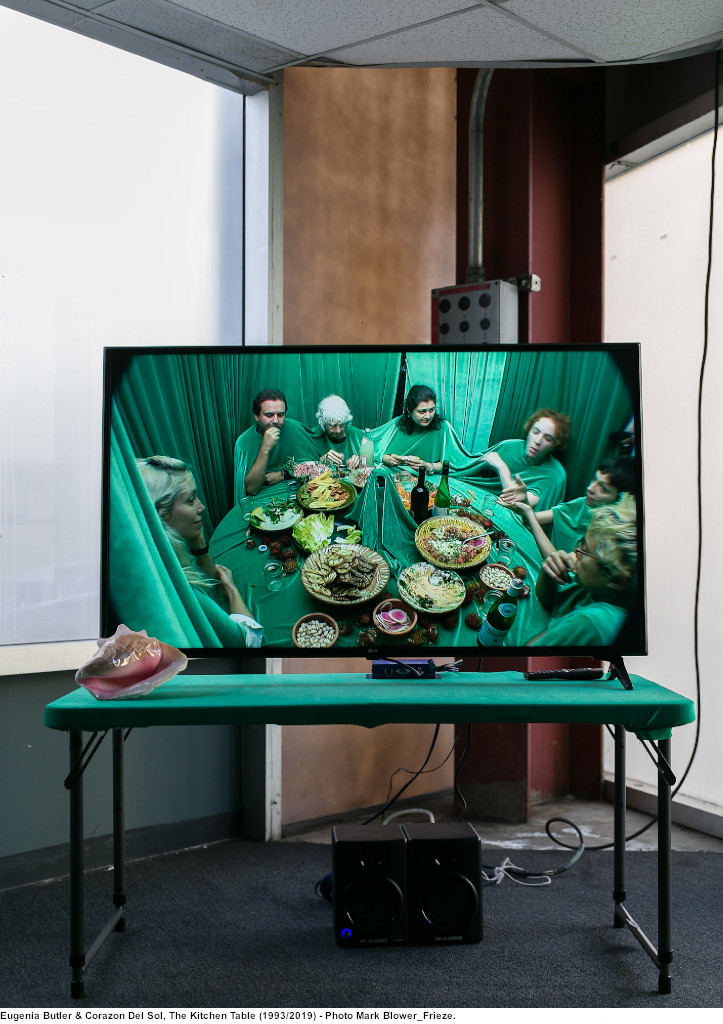 Their individual presentations included discussions on collective intelligence, software and data mining, DNA lineage development, and auto catalytic processes.  It was dedicated to scientific activism internationally.  Hopefully, future editions of Frieze will to continue to look towards these art/science issues, with artworks and topics of discussion that challenge the entertainment/art community with the future of the human condition.