“Moving Atmospheres”, from the Anthropocene to the “Aerocene”

Garage Museum of Contemporary Art is pleased to present Moving Atmospheres, a monumental new installation by Argentine environmental artist Tomás Saraceno. The work opened to the public on September 11 alongside the 2nd Garage Triennial of Russian Contemporary Art, and will remain on view through March 14, 2021.

Moving Atmospheres is a partially mirrored sphere suspended midair in the museum’s atrium, and forms a prototype for self-sustaining flight powered solely by the air and sun. The installation builds on Saraceno’s enduring interest to move from the Anthropocene into an era of the “Aerocene”: a carbon-free, non-exploitative mode of coexisting with the Earth’s atmosphere. In January 2020, Saraceno set multiple world records with the community group Aerocene after the successful flight of the solar balloon Aerocene Pacha, which, like the structure modeled in Moving Atmospheres, harnesses wind and solar heat without the use of lithium, solar panels, helium or fossil fuels. 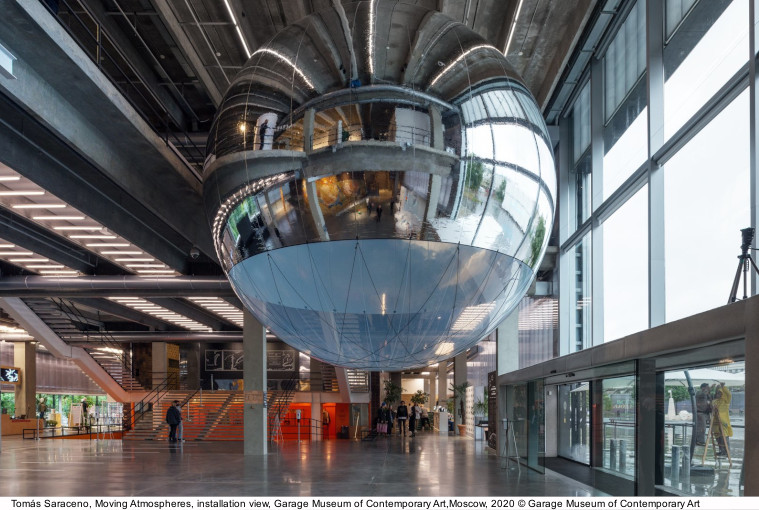 Saraceno’s new installation is the model for a larger, fully functioning vessel for long-distance flight that uses transparent polymer and light-reflecting foil to regulate its internal temperature (and, consequently, elevation). This emulates the Infrared radiation balloons, which, starting in the 1970s, have been launched into the upper levels of the atmosphere in a series of scientific experiments conducted by the French Centre National d’Études Spatiales (CNES). These experiments are still ongoing, and were the source of Saraceno’s inspiration after a 2014–2015 artist residency at CNES.

Moving Atmospheres is the largest presentation of Saraceno’s practice in Russia, and resonates with themes found in the country’s Cosmism and avant-garde movements. The artist explains to Garage curator Iaroslav Volovod: “One can’t talk about speculative architecture, flying cities, floating urbanisms, alternative ways of living and relating without discussing the constructivists, nor can one think of our relationship to space and the heavens without paying some homage to the cosmists.” Saraceno’s utopian vision, however, rejects the extraterrestrial escape favored by cosmists. “An aerosolar sculpture is not meant to remove you from Earth so that you can live in some unsullied environment above the clouds,” he explains. Saraceno’s goal, rather, is a “new form of engagement with the air, a flight that is in full communion with the air and the weather.”