Mattia Casalegno at Bedlam Lorenz Assembly: What it Takes to be a Body

What it Takes to be a Body is an exhibition by Mattia Casalegno at the Bedlam Lorenz Assembly in Fort Laudendale, Florida. Prompted by the French philosopher Michel Serres’ book “Variations on the Body”, Casalegno’s large scale installation reflects on the idea of beauty and the fallacy of the presumed superiority of man and its machines over nature.

This site-specific project comprises two previous installations, Left Handed (2014), Twins (2015), and a new series of twelve laser engravings on mirrored acrylics and Teflon, inspired by the narratives of the two pieces. In Left Handed, an audiovisual installation consisting of two 24” long screens facing each other, details of neoclassical sculptures alternate with glassy, reflective 3d models of what it seems an aircraft engine.

Using imagery taken at the historic Italian workshop of the master sculptor Antonio Canova, this piece is a reflection on the human body and its relation to power and knowledge. An homage to an idea of beauty and perfection of man and its machines, as well as a reminder of the power of human hubris arising from such conception music by Different Fountains (Meakusma, BE). 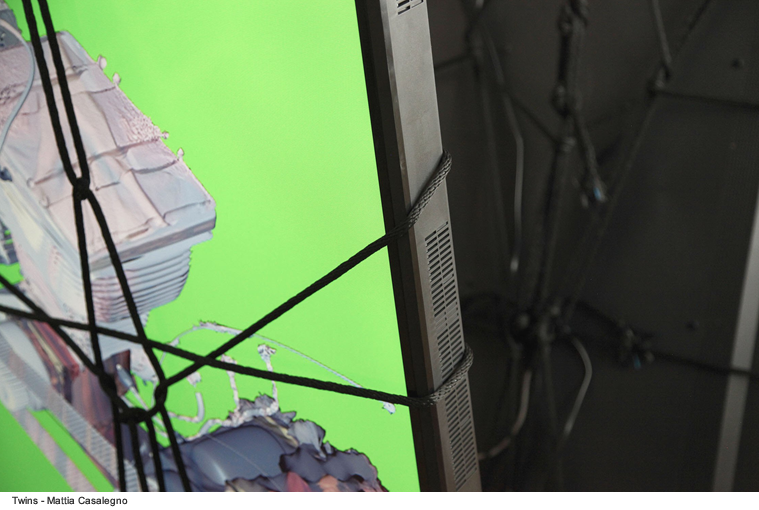 Twins is an installation of high-definition flat monitors displaying CGI compositions of vaguely zoomorphic, machine-like objects in constant transformation, tied and embraced in ropes in the style of Kinbaku, the japanese art of bondage.

In this installment of the piece, produced in collaboration with rope artist Alex Rodriguez, the screens hang at various heights in a web-like maze of ropes and resemble tied bodies, enslaved subjects and objects of both desire and display.

Mattia’s artwork displays bondage bodies, objects of both desire and cruelty, but in this piece the two flat monitors become bodies themselves: literally tied, restrained, coerced, enslaved subjects and objects of display. Suspended between viewers, twin monitors intrigue and seduce, calling forth in us hidden fantasies, freeing deeper emotions and sensorial experiences; or perhaps they could fall suddenly as Eve’s apple from its tree, bringing sin on earth.

While previous Casalegno’s works were participatory, relational, and often activated by the audience’s interaction (Unstable Empathy, 2012; The Open, 2014; The Grass Roller, 2014), in these last projects the audience becomes a mere spectator, caught on the process of connecting with an ‘alter’ which is never present, witness of a humanity on display.

Mattia Casalegno is an Italian visual artist working in a broad range of media. His multidisciplinary work is influenced by both post–conceptualism and digital art, and has been defined relational, immersive, and participatory.

His practice explores the effects new media have on our societies, investigating the relationships between technology, the objects we create, our subjectivities. In the past years he exhibited at New Technological Arts Awards 2015, MACRO Museum in Italy, Kuandu Museum of Fine Arts in Taipei, Mutek festival in Canada, Le Cube in France, Nuite Blanche Brussels, among others. He lectured at UCLA and the Art Center College of Design in Pasadena, CA. He is currently dividing his time between Los Angeles, where he founded his studio A Radical Hypothesis in 2010, and New York, where he recently co–founded the no profit space Roomservice.