The HyperPavilion was an important part of the 57th Venice Biennale and lasted from the 13th of May until the 30th of October 2017. The pavilion was spread around three massive historic warehouses, located in the northern side of the Arsenale (aka Arsenale Nord) in Venice. Visitors had to undertake a journey into the journey to reach the location, thanks to a Charon-like ferry that carried people back and forth the two banks of the canal.

Philippe Riss-Schmidt, curator and founder of the HyperPavilion, is a curator and exhibition maker based in Paris and Paimpol, France. Philippe also runs the PR Curatorial Office (2016), a curatorial bureau devoted to the organisation and exposition of large-scale outdoor and indoor exhibitions.

Philippe’s previous key curatorial projects include: New2; Drawing After Digital; Surface Proxy; Full Screen; #1DAD. He has also organized the HyperSalon at the Musée d’Art Moderne de la Ville de Paris, and inaugurated the #postdigital conference cycle at the École Normale Supérieure, in Paris. In addition, has also worked as a gallerist and art advisor in London and Paris. 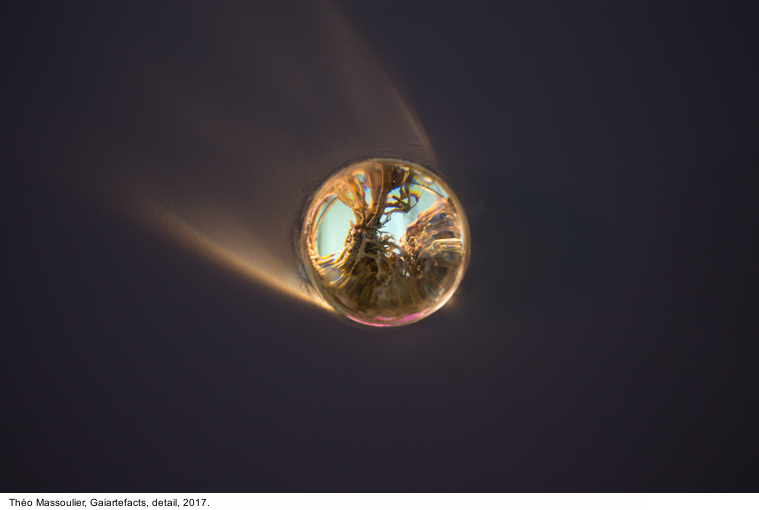 The HyperPavilion curatorial statement reflects Philippe’s ideas and approaches. It draws from the concept of Anthropocene, our current geological epoch in which human activities have a strong impact on the global climate change and ecosystems. Nowadays, networks are omnipresent, the boundaries between real and virtual have blurred, and new post-digital artforms are emerging from this hyper-connected world.

Producer and co-founder of the HyperPavilion is Fabulous Inc., an international collective of creative directors established in 2010 and based in Seoul (South Korea). Fabulous has produced several cutting-edge exhibitions, projections, virtual and augmented reality projects around the world; contributing to the emergence of a whole new way to create, produce and display digital contents.

The large-scale exhibition at the HyperPavilion showed a variety of site-specific art projects, in which artists have questioned both the consequences after the arrival of the digital, and the ongoing merging process between physical and virtual worlds.

The HyperPavilion focuses on an international selection of artists, whose common objectives are questioning, challenging and responding to the current digital transition. The artists at the HyperPavilion make use of different types of technology, spanning from large-scale projections, 360° immersive cinema, and holograms, to multi-screen installations and hybrid artworks. 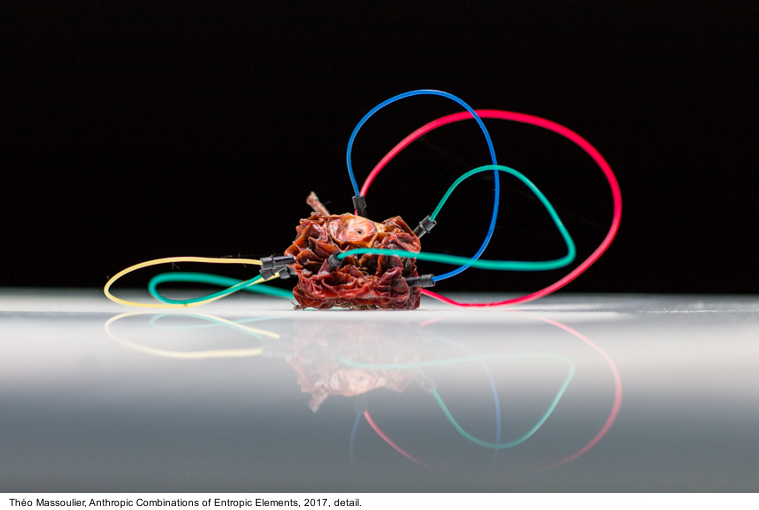 Some examples are: The Council (2017) by Frederik De Wilde, consisting of 38 screens acting like artificial brains; Gaiartefacts (2017) and Anthropic Combinations of Entropic Elements (2016) both by Théo Massoulier. In the first piece objects and elements such as a jellyfish, a fossil, a piece of coal, cells of matter, a stone and other uncanny hybrid forms are projected and transformed to stimulate and nourish the viewers’ imagination.

The second is a series of hybrid creatures resulting from the combination of minerals, plants and everyday objects that suggest a whole new generation of crossbreed beings. Claire Malrieux’s Climat Général (2017), a self-generative graphic film based on a non-linear reading of events in which the spectator loses himself immersed in a computer-generated abstract landscape, and the installation Weeping Angels (2017) by Aram Bartholl composed by the performance Digital Security Guards and the installation Mirror Police Riot Tank (2017) plus a series of other features (a carpet, a phone charging station and a coffee vending machine). Bartholl sheds light on the dark age of surveillance, violation of civil rights, cyber wars, and terrorist attacks. 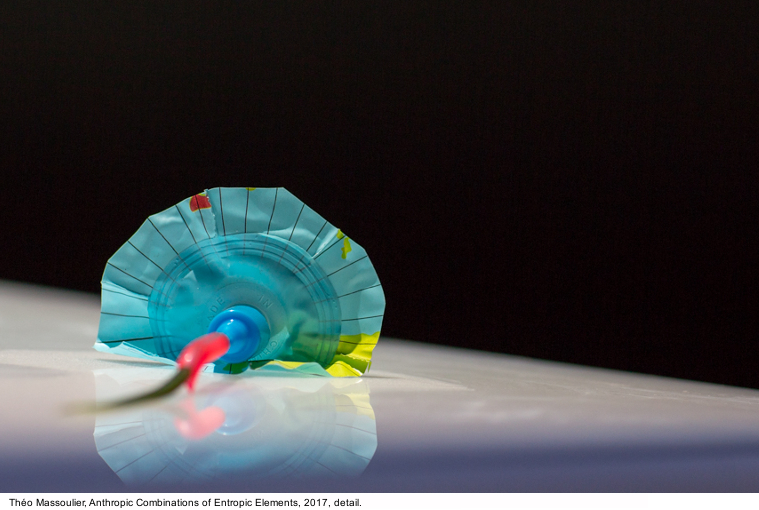 After the closing of the HyperPavilion I have reached Philippe Riss-Schmidt for an interview to discuss the post-white cube curatorial approaches, the merging of the real and the virtual in the contemporary art world, and the overall experience of displaying networked and hybrid artforms within an institutionalized event such as the Venice Biennale.

Donata Marletta: According to your experience as a curator, what are the most challenging aspects in terms of presenting networked and time-based art projects? And, how is the role of the curator changing in the shifting between object-oriented to process-oriented art?

Philippe Riss-Schmidt: Well, I could not imagine curating an exhibition differently. I believe we live in an era where everything is connected, where physical and digital are entangled, therefore, it is very difficult for me to imagine curating a prospective exhibition without including generative, networked or time-based art pieces. This being said, the most challenging aspect is that the exhibition does not appear to be all about the medium and that technology does not surpass the substance. 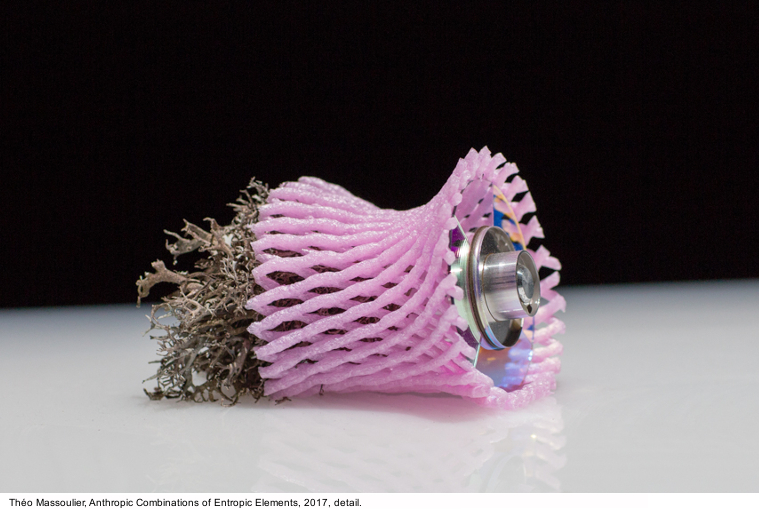 I am working on shows that are not technology-oriented driven; these exhibitions are contemporary art exhibitions of our times. Also, the maintenance of that kind of exhibition is very much challenging, you need to make sure that everything runs smoothly during the entire period of the show, it is important that the tech team is la crème de la crème team.

Donata Marletta: The increasing uses of new technological media have split reality in two symmetrical parts, the real and the virtual. What are the limitations and the advantages of this on-going transformation?

Philippe Riss-Schmidt: The virtual is very much real because we are all aware that the digital revolution has started a long time ago, and the world has already been digitalized. It’s a fact; this is the state of the world we live in. Nevertheless, the consequences of this revolution are now accelerating. In a few years from now all human beings will be ‘native’ from this new age. I try to explore the ways in which digital and physical worlds merge and create an entangled, hybrid new reality, which encompasses and envelop us globally. I don’t see a split. 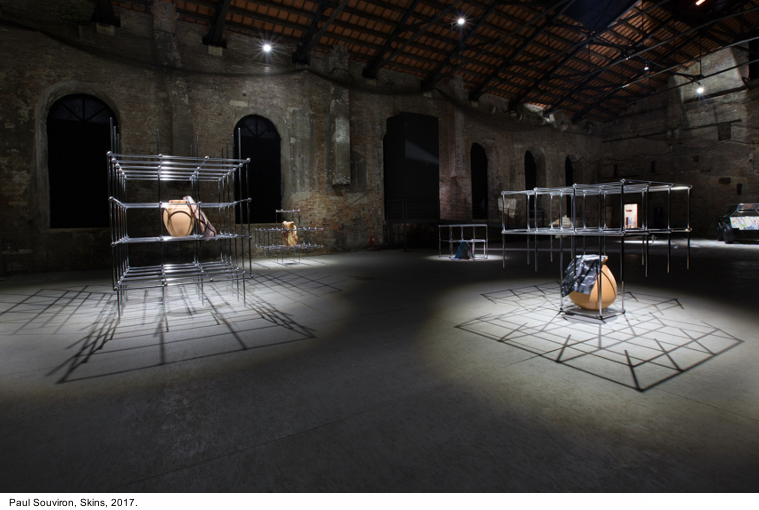 Donata Marletta: The rather unconventional location of the HyperPavilion at the Arsenale Nord, within the 57th Venice Biennale, seems to respond to the quest of a space where the connection between physical and virtual worlds is finally established. What can you tell us about the centrality of the exhibition space in the digital era?

Donata Marletta: I was particularly impressed by the variety of installations spread around the pavilion. All these incredible and fascinating artworks have been created specifically for the HyperPavilion and its huge spaces. What is the fil rouge that connects the pieces?

Philippe Riss-Schmidt: The first HyperPavilion is a survey exhibition at large, being part of the Venice Biennale for the first time. It was important for me to propose a general statement. Therefore the HyperPavilion focuses on an international group of artists, whose common objectives question, challenge and respond to the furthering digital transition I have just been talking about.

Now that the digital revolution has happened, and that everything from climate to technology is changing at an accelerating pace, l will say humanity has entered phase two of the Anthropocene, and due to the connectivity of an exponent networked system, has formed both the first global civilization, and at a same time, a multi-centred civilisation. 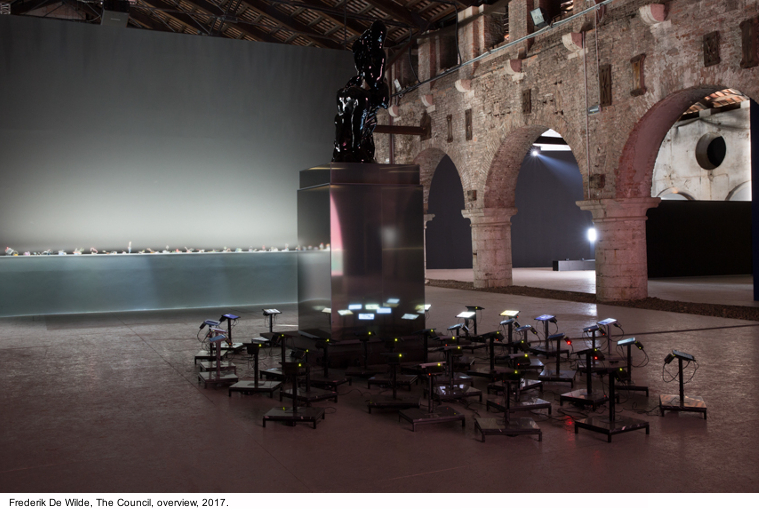 The exhibition shows that: the infiltration of the network is ubiquitous; the merging of the physical and digital has created a continuous vibration; everything is linked by direct or distended contact; everything is connected; everything is entangled; everything is bathed in the same environment that unfolds in successive encapsulations, which are both visible and invisible.The next editions of the HyperPavilion will focus on more particular topics.

Donata Marletta: The majority of the artists involved in the HyperPavilion are young talents coming from different backgrounds. What were your main criteria for the selection of the artists?

Philippe Riss-Schmidt: I have been following the research of these artists for a while now, and I have selected a mix of native and non-native artists. Millennial and Generation Z artists were born at a turning point in the human history, they may be considered the first post-biohuman generation. It was very important, if not mandatory, to integrate their way of thinking in the pavilion. 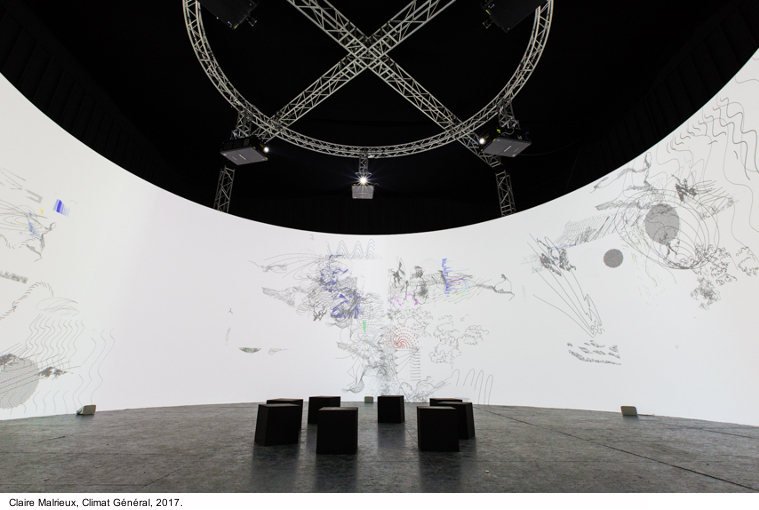 Donata Marletta: Could you tell us how important is for you as a curator creating a synergy with producers (the Korean group Fabulous Inc. is the producer and co-founder of the HyperPavilion) and artists, both on theoretical and technical levels, to allow the creation of an exhibition space based on new collaborative models of production and presentation?

Philippe Riss-Schmidt: I have been very lucky to work with Fabulous Inc. for this first edition. They accepted to produce the first HyperPavilion and gave me a 100% carte blanche. We have worked closely together with the artists and the producers to create specific art pieces, and we have also presented existing art projects. I believe that new exhibition and production models are emerging along with new ways of displaying.

Donata Marletta: In spaces like the HyperPavilion audiences become more and more active participants, no longer trapped in the traditional role of the passive viewer. How did the visitors respond to such strong stimuli?

Philippe Riss-Schmidt: The exhibition was indeed quite immersive. The idea was that the visitor would experience the exhibition, that’s why the projections were such on large scale and that we also had performances. We had more than 50 000 visitors, it was interesting to see the reaction of native and non-native visitors, while native visitors felt at home immediately, you could see a little struggle from traditional visitors at the beginning, but while leaving the venue, I believe everyone had learned something. 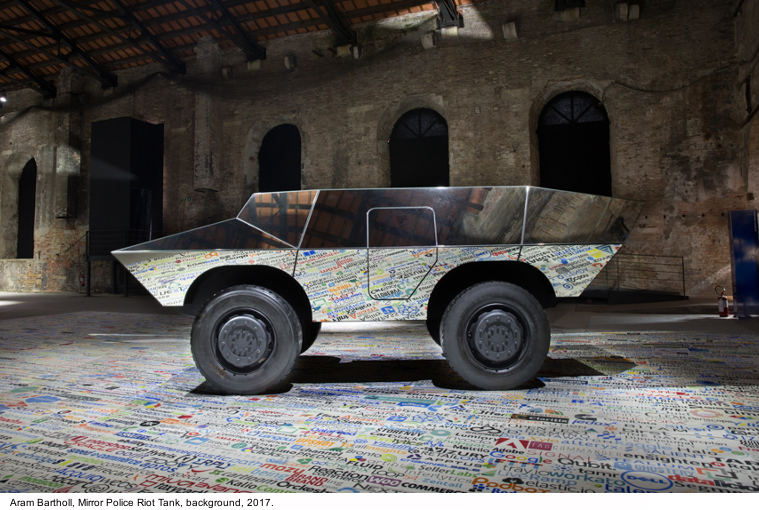 Donata Marletta: Do you have any upcoming curatorial projects? If yes, could you give us a preview?

Philippe Riss-Schmidt: I am already working on HyperPavilion 2019 in Venice, and on another show exploring the current interaction between nature and technology, to be announced in 2018. Subscribe to my Instagram account (@philipperissschmidt) to stay updated and know more about forthcoming projects.