Wolfgang Tillmans has been exploring since the early 1990s how we view our world and the social conditions in which we live. Guided by the self-critical question “What do I really see? What do I see, and what do I want to see? What is in the picture?” he devotes his work to people and bodies, to landscapes, architectures, objects, and celestial phenomena.

Tillmans produces photographs, installations, videos, and music that push the boundaries of the visible, revealing alternative modes of perception that impart subtle insights into the very foundations of our coexistence and desires. His open-mindedness and rejection of any one-dimensional perspective render unconsidered postulates of truth just as questionable as absolute standpoints or authoritarian attitudes. The resulting works demonstrate the will to form communities, to interact with others, to engage in self-reflection and thus overcome rigid (aggregate) states.

In view of the extraordinary acclaim Wolfgang Tillmans has enjoyed worldwide in recent years, it comes as a surprise that his works have been shown only sporadically in Vienna. It thus seemed to us to be high time to offer a comprehensive look at Tillmans’s multifaceted oeuvre.

The exhibition Wolfgang Tillmans: Sound Is Liquid features early photographs produced in the pop-culture milieu of the 1990s along with abstract images, high-resolution photographs of the globalized and digitalized reality of the early 21st century, and photos taken shortly before and during the coronavirus pandemic. The two-channel video installation Book for Architects will also be on view, as well as a number of recent music recordings and videos. Tillman’s recently released debut album Moon in Earthlight will also be presented in a sound-video installation in the exhibition space. 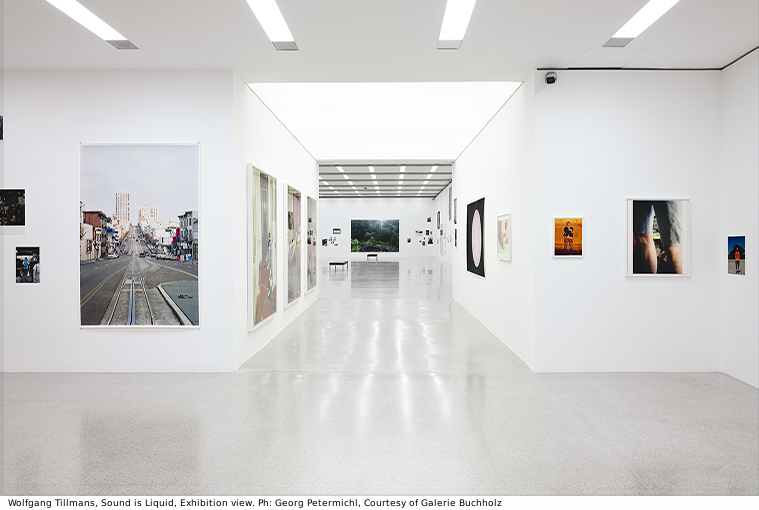 Closely observing people, their relationships, and their connection to the things all around them is of central importance to Tillmans’s work. Our interpersonal relations and modes of perceiving bodies, images, materials, and surfaces are currently undergoing far-reaching changes as our everyday lives are increasingly relocated into virtual space. This restructuring of space and the accompanying media developments are also affecting the status of photography and its relationship to materiality and visuality.

In recent years, Wolfgang Tillmans has increasingly turned his attention to this ever-changing relationship between haptics and optics, between body and gaze – whether addressing the materiality of paper and its perception by way of varying forms of presentation, framing, and depiction; exploring different printing processes and inks; or experimenting with degrees of focus and resolution that far exceed our eyes’ capabilities. His works thus repeatedly address the conditions and limits of the visible in relation to other forms of sensory experience, inquiring into the status and role of photography between analogue and digital forms of production and representation. In this way, Tillmans’s art allows us to engage with the “distribution of the sensible,” or rather with those “forms of the reconfiguration of experience” that, as the philosopher Jacques Rancière aptly puts it, also constitute the terrain for “our political subjectification.”

Tillmans’s works on view at mumok deal with social, technological, and media transformation as well as undertaking a pointed examination of forms of presentation and perception in the museum space. Engaging with the distribution of the sensible, in other words, with the relationship between visuality and corporeal presence, entails here last but not least investigating modes of presentation and reception, spatial and dimensional relationships, as well as our experiences of proximity versus distance (which have been thoroughly altered especially over the last year and a half).