Ulrik Heltoft: 7 Films, One Photo and a Silver Nose

Reality and illusion, science and art merge when Ulrik Heltoft’s subtly humorous universe meets the Baroque spirit that infuses kunsthalle Gl. Holtegaard. As part of the exhibition trilogy BAROQUE+Contemporary Art, Gl. Holtegaard has invited Heltoft to revisit the history of the site; a history that points back to the mid-18th century and an era shaped by absolute monarchy and careful staging.

With the exhibition 7 Films, One Photo and a  Silver Nose, Heltoft expands the exhibition format and his own practice by incorporating live events and the book format in his artistic work.

The exhibition presents works executed in the media of photography, film and installation art by Ulrik Heltoft, whose artistic work is carried out in a constant and ongoing dialogue with a range of art styles and movements, historical events and characters and personas from the realms of science, literature and film. For example, the church Vor Frelsers Kirke in Copenhagen—the greatest work of architecture created by the architect behind Gl. Holtegaard, Lauritz de Thurah—appears in one of the artist’s earliest film works. Here the myth about the church spire and its backward staircase spiral merges with the story of the French writer Jules Verne, who presumably visited Copenhagen in 1864 and began working on the manuscript for his sci-fi novel Journey to the Centre of the Earth (1864).

A new film produced for this exhibition bears the title HOC COH (As Far as the Eye Can See), 2016; in Russian the title means “nose dream.” In this work Heltoft appears wearing a silver nose in the guise of 16th century astronomer Tycho Brahe. Brahe wore a prosthetic nose after losing a piece of his own during a swordfight in 1566. The work shows a pensive man, barefoot and wearing a bathrobe, moving searchingly through a rough, desolate rocky landscape, enveloped by the raw forces of nature in the form of a heaving sea and sparkling starry sky. The work centres on Tycho Brahe’s Renaissance approach to science, where the quantifiably factual and the occult or the divine were not opposing or mutually exclusive forces. 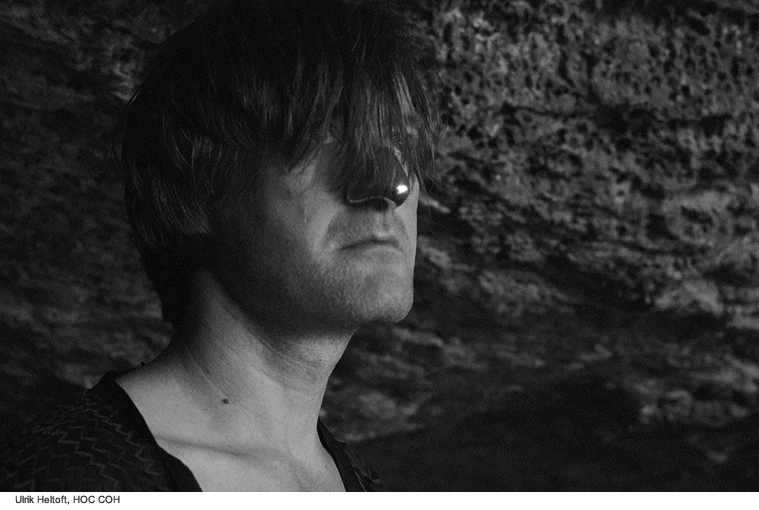 Such layers of references are typical of Heltoft’s art and methods—stories meet and become new narratives through the artist’s aesthetic treatment. Heltoft casts himself as the characters in his work, offering enigmatic explorations of mythical male figures that are often depicted as questing searchers. Heltoft explores new opportunities and variations by staging his scenes and himself, employing a range of filmic and optical effects that blur the boundaries between documentation and fiction, art and science. Heltoft’s aesthetically sophisticated black-and-white imagery conjures up a densely laden sensuous universe whose narratives appear both real and fantastical at the same time.

At Gl. Holtegaard, Heltoft accentuates and dramatizes the Baroque aesthetic and its sensuously playful approach to polar opposites such as outside and inside, light and darkness. He does so in an elegant, site-specific manner: a total installation transforms the exhibition rooms into vast camera obscura cabinets. Lenses and objectives placed on darkened windows incorporate the garden outside in the exhibition itself, creating a sensuous and illusory atmosphere. Upside-down images of the formal garden mingle with sounds and pictures from the films exhibited, causing our experience of time and place, work and reality to mix and merge.

The one photograph in the exhibition, Voynich Botanical study 52R (prototype), 2013/16, takes its origins in Heltoft’s ongoing work with the enigmatic 15th century botanical reference work known as the Voynich Manuscript. Science has as yet been unable to untangle the riddle of this manuscript: the inscriptions for the many botanical illustrations have been written in encrypted code, and the plants are still today unidentified. The photograph featured at this exhibition has been created on the basis of one of the plant illustrations in the manuscript, using computer-generated 3D technology transferred to the medium of analogue photography. The picture shows an exploded flower in fragments; an image that has a certain visual kinship with a Baroque formal garden plan. 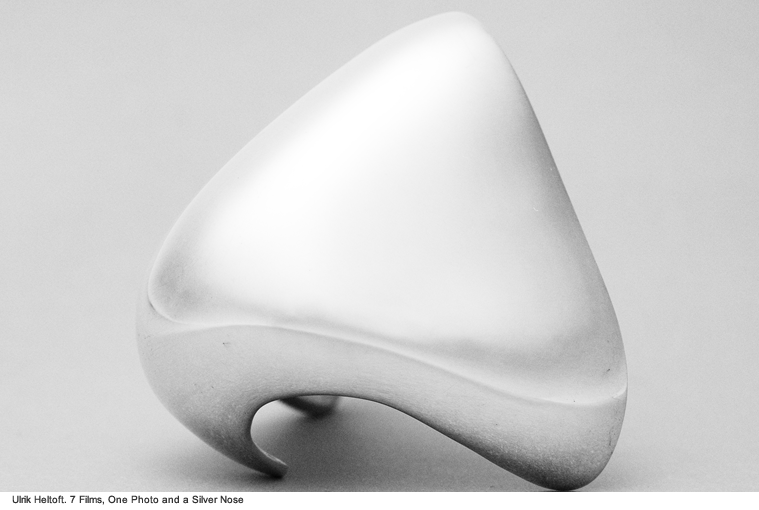 The poetic soundscapes featured in Heltoft’s new work were created by the cellists Soma Alpass and Lil Lacy. The duo Soma & Lil is known for its innovative music, which occupies a territory where acoustic sounds, classical music, aural experiments and improvisations intersect. Working in cooperation with the cellists, Heltoft has prepared the live event programme Live – 5 Cellist, 1 Violinist, 1 Dancer and 1 Artist. Encompassing five events from May to July, this programme will prompt interaction between the exhibition, music, body and speech.

Working in collaboration with designer Claus Due, Heltoft has created the book 8 Films and a Hanful of questions, The book explores how one may transfer the explorations of time seen in Heltoft’s cinematic works to the static format of books. The book is accompanied by a flexi disc with excerpts from the soundtrack of Heltoft’s work Kabinet, 2014.