Staging Film: the relation of image and space in video art

Curated by Sam Bardaouil and Till Fellrath

The exhibition Staging Film: the relation of image and space in video art builds on Busan’s international reputation as a city of film, and its legacy as the host of one of the most important global film festivals. It seeks to explore the link between films seen in traditional cinema settings, and those that are experienced as an installation within a museum setting.

If Cubism allowed for the painted image to exist along a multiplicity of vantage points, and if Pollock’s drip paintings, with his body moving across the canvas, introduced temporality into the act of painting, similarly, video art has stripped the fixedness of still images and traditional film, collapsing their one point perspective and linear narrative.

The exhibition is constructed along two main curatorial axes. The first highlights the literal act of staging through which each of the featured artists conceives and presents their video(s) within a distinct physical space. The second, a metaphorical one, emphasizes the process by which the artists present their subjects within the films themselves. 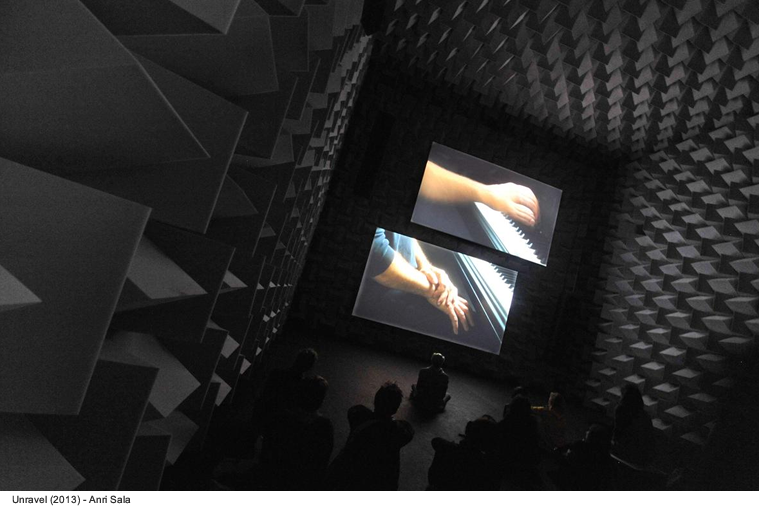 They achieve this either directly, in referencing theater or set-design, or indirectly, in the way they consciously stage them to encourage the viewer’s voyeuristic gaze. Each of the 12 artists in the exhibition is represented by one seminal installation that occupies its own distinct environment.

Ranging from a 45-second loop to an 85-minute narrative, they make use of a different approach to the relationship between the projected image and the physical space in which they are staged. With works that date from the early 1990s until today, the exhibition illustrates how over the past two decades video artists have been subverting cinema’s technical and formal characteristics in order to challenge the boundaries of the medium itself, thus expanding the viewer’s experience of form, time and space.

Anri Sala’s installation Unravel(2013), comprising two films, is meant to be experienced in two stages: on a plasma screen positioned in the corridor leading to the main space where the second film is projected onto a large fixed surface.

Bill Viola’s The Lovers (2005) is displayed on a vertically mounted plasma device. The narrow space of the screen adds to our perception of the two lovers’ confinement in the film.

In Staging Silence (2) (2013), Hans Op de Beeck reconstructs settings that lingered in his memory of the many public places he has experienced. The scale of the projection onto the rear wall of the space enhances the confrontational quality of the artificial staging act. 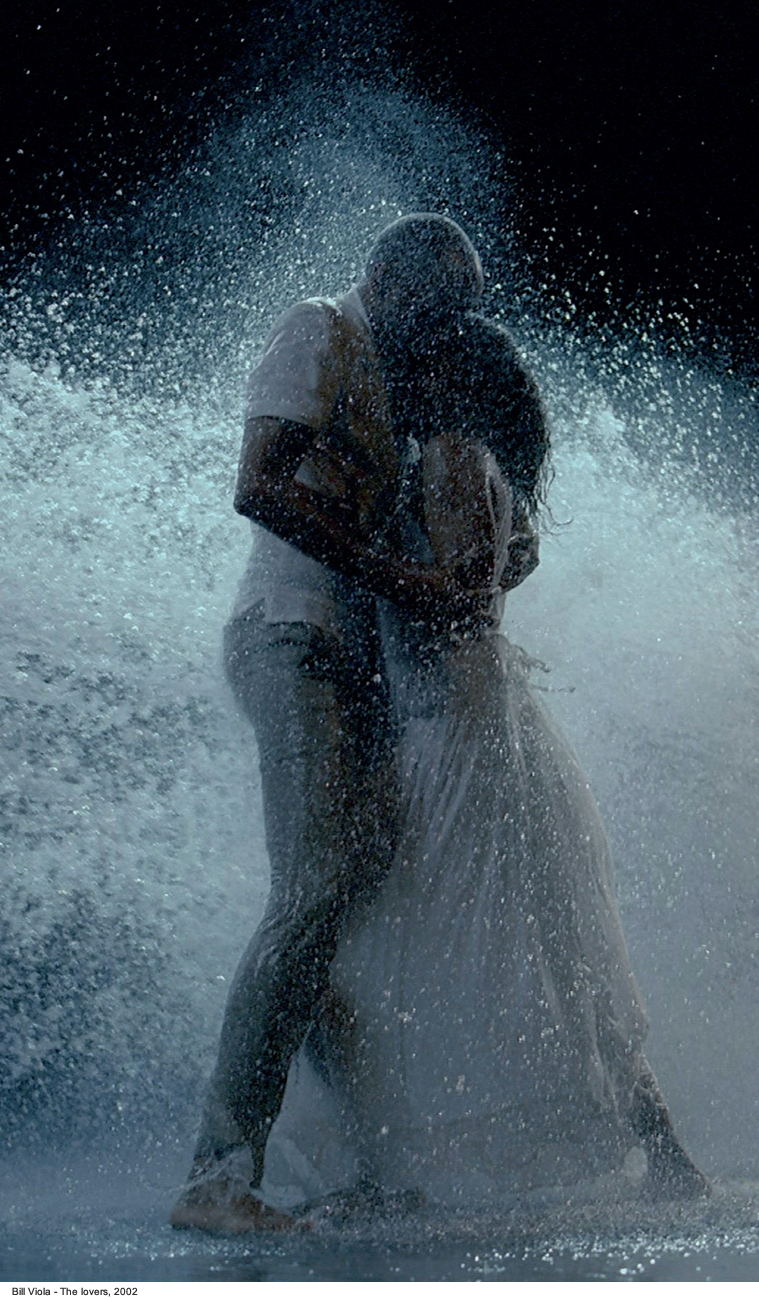 In Muslimgauze R.I.P. (2010), a single-channel work by Hassan Khan, the image is projected on a fixed surface augmenting the suspension of the present moment that the artist has arrived at through a distinct filmic style.

Mikhail Karikis’s SeaWomen (2012–13) is a twelve-channel sound and two-channel video installation about elderly female sea laborers called haenyeo on the isle of Jeju, South Korea. The work is staged in an informal setting, allowing an elongated engagement enhanced by a concert-like soundscape.

In Moon Kyungwon & Jeon Joonho’s El Fin del Mundo (2012) two screens sit side-by-side touching at a slight angle. The positioning of the screens enhances the conflation of temporalities flattening the contours that define the past, present and future.

Paul Pfeiffer’s Caryatid (Red, Yellow, Blue) (2008) is shown on three custom-designed monitors. The monitors sit on the floor, and are viewed from above. This enhances the viewer’s experience of the looping montage of soccer players depicted falling hard on the field.

Sarah Choo’s The Hidden Dimension (2013) is an immersive installation where several screens are lined up one against another, each depicting a scene of individuals engaged in domestic activities. It deceives us into believing that we are stepping into a living space.

Shirin Neshat’s Rapture (1999) is a two-channel video divided down gender lines where the men are projected on the left wall of the gallery, and the women on the right, making it impossible to grasp the action in one scene without turning their back on the other.

Siren Eun Young Jung’s Act of Affect (2013), a single-channel installation about the South Korean yeosung gukguek form of theatre, is entered through a theater curtain. The proportions of the screen to the space collapse the boundaries between the virtual and the real.

Steve McQueen’s two-channel Ashes (2013) is presented on one large screen that hangs in the middle of a darkened room. Super 8 footage of a young man on the edge of a boat is projected onto it. The floating screen multiplies the effect of the boat’s shaky movements enhancing our perception of the man’s fragility.

Wu Tsang’s two-channel The Looks (2015) is about Bliss, a pop star by day and underground performer by night. First, we are confronted by a free standing screen, showing Bliss off-stage. Crossing from either side, we are engulfed in a much larger projection of Bliss in one of her performances. This presentation reinforces the interdependence between the private and the staged.