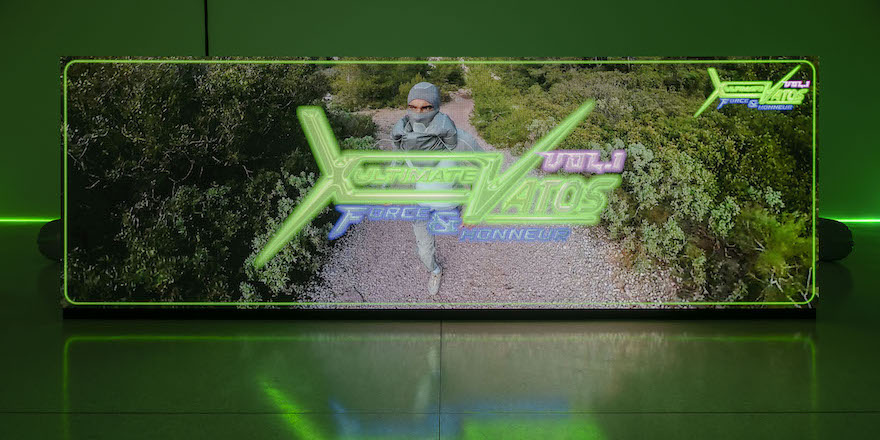 The videos, performances, installations and photographs by Sara Sadik (b. 1994 in Bordeaux, lives and works in Marseille, France) range from manga, video games, docufictions to CGI-animated films. In the course of these works, the artist—who has Moroccan/Algerian roots—explores manifestations of what she calls “Beurcore”—a form of youth culture that emerged among the working classes in the North African diaspora. “Beurcore” defines both a hybrid identity and a collective movement constituted through music, such as rap and hip-hop, language, fashion, specific symbols and social media. With references to these specific markers of belonging, the artist succeeds in providing an incisive yet empathetic analysis of the social pressures and expectations placed on young adults in a post-migrant society. Ultimately, she is concerned with the valorisation of certain social classes that inspire a white majority society through their codes and music, but enjoy little social prestige overall. 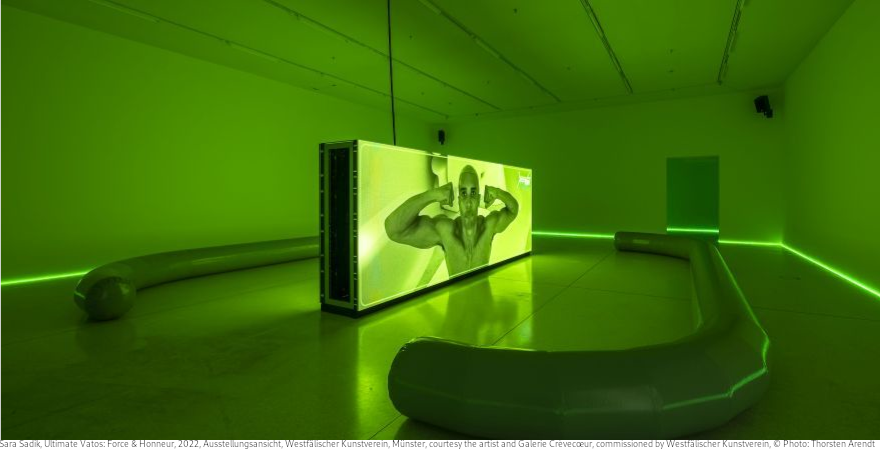 A 2-channel video installation forms the centre of Sara Sadik’s exhibition Ultimate Vatos: Force & Honneur, conceived especially for the Westfälischer Kunstverein. Arranged back-to-back, the LED screens are surrounded by two elongated seats made of PVC. The exhibition display is thus reminiscent of an ancient arena or the layout of a modern football stadium. The centrepiece is the LED wall presenting a show featuring a young man, a “Vatos” (a colloquial term for a Latin American man, comparable to the English “guy” or “dude”). As a participant in a military programme called Ultimate Vatos: Force & Honneur, which is geared towards physical and mental training, he embodies the trope of the perfect fighter. The aim of this programme is to give young men the opportunity to become the “ultimate man” with the help of “zehef”—an Arabic word meaning “angry” and also used in French. As in her previous film Khobtogone (2021), Sadik’s continued interest focuses on the conditioning of identity through the prism of masculinity.

Situated somewhere between The Hunger Games—a series of films based on novels—and a type of fictional survival training in reality TV format, the video follows the protagonist as he completes various tasks. On the one hand, he is confined in solitary inside, isolated from the other candidates and under observation, whereas on the other, outside, he has to search, on his own and unsupported, for a flag in an inhospitable area. The video was produced with the help of various image recording techniques, such as point-of-view shots, top down perspective and with a 360° panorama camera that offers a variety of viewing angles. In the course of the sequences, the atmosphere changes from a video games, such as GTA, and videos on social networks, such as TikTok to a strict surveillance system. This last perspective in particular palpably visualises the pressure the candidate is under. In the form of a voiceover, we hear him speak of his feelings, of loneliness, stress and anxieties. This procedure enables a change of perspective and, through his personal narration, offers the possibility of identification with the candidate. In this way, Sadik opens up an intimate moment, which we share with the protagonist, and which reveals him in all his humanity. Characteristics deemed masculine, such as success, toughness and strength, which the Ultimate Vatos organisation aims to bolster, are suddenly levelled—in what amounts to be a an almost painful contrast—by vulnerability, insecurity and melancholy.

If, at the beginning of the video, the protagonist admits his desire to make a fresh start, in the end the true victory for him lies in the recognition of his own identity and not in becoming the “ultimate human being”. Beyond the clichés and stereotypes that the artist plays with, love for oneself and for one’s nearest and dearest proves to be a source of energy and a form of resistance that enables one to surmount social oppression and exclusion.