The Linda Pace Foundation presents the Texas debut of Secondary Stories, a room-sized installation by Brazilian artist Rivane Neuenschwander, who has become widely regarded for her often ephemeral work that explores narratives about language, nature, social interactions and the passing of time.

The exhibition, which will showcase Secondary Stories as well as three video installation works, opens at SPACE, the public gallery of the Linda Pace Foundation, on April 30, 2016 and will remain on view through July 29, 2017.

“The Linda Pace Foundation is delighted to present this hypnotic installation by Rivane Neuenschwander,” says Foundation trustee Kathryn Kanjo. “In Secondary Stories, she seems to take viewers through the looking glass: the outsized confetti makes us feel small and we become lost in the slowly shifting play of light and color. Since her Artpace residency in 2001, Rivane has achieved great acclaim, with major exhibitions at the New Museum 2010 and at the Museu de Arte Moderna de Sao Paulo in 2014, which included a version of Omission Points, created at Artpace.” 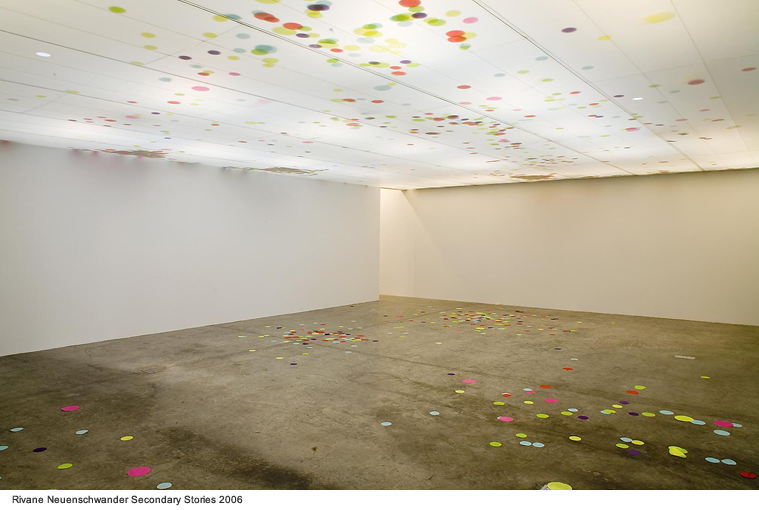 In the central installation, Secondary Stories, a constellation of brightly colored circles is visible through a translucent ceiling. Hidden fans gently move the confetti-like shapes across the scrim surface, creating a dynamic abstraction.

Occasionally, the colored forms slip through perforations in the ceiling and flutter to the ground. The fallen dots mirror the pattern above and are further shifted by the incidental movements of the visitors to the gallery. The circular, overlapping forms evoke mathematics and op-painting, even as they recall the look of celebratory confetti, a material the Brazilian artist has used in other works. Neuenschwander notes how confetti, “has a direct association with carnival.”

In Quarta-Feira de Cinzas/Epilogue (2006), also on view, the artist tries to “capture the mood of the end of the festival, where there is a certain madness and excess. This is where my memory of childhood comes from” (“Art World Magazine”, April/May 2009). The work, made in collaboration with Cao Guimarães, presents armies of black ants carrying colorful pieces of confetti, implementing their own narrative of creation, composition and production. 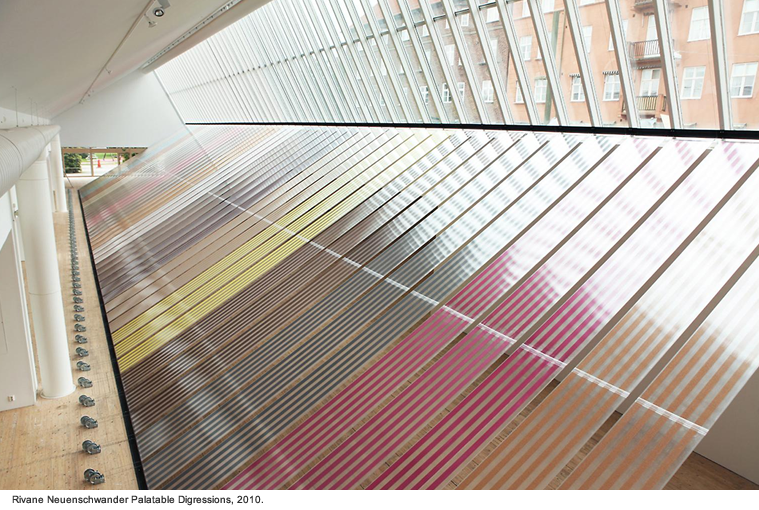 Neuenschwander frequently turns to photography and film to capture and preserve the fugitive, as in Inventory of Small Deaths (Blow) (2000), also made in collaboration with Cao Guimarães. The video, shot at Guimarães’ family farm in Belo Horizonte, Brazil, shows a looped black and white film, which was edited so that a large, dramatically amorphous soap bubble appears to float across different landscapes without ever bursting. At turns, glassily reflective and all but invisible against the clouds, the bubble—like so many of Neuenschwander’s works—is sensuously bodily while remaining poised, a pinprick away from disappearance. The climax of the bubble’s “death” is eternally postponed: the fleeting is granted permanence.

Transformation and fluidity are an underlying theme of the exhibition’s third video work, which the artist produced in collaboration with her brother Sergio Neuenschwander.

In Love Lettering (2002), goldfish swim back and forth in bright blue water. Attached to their tails are tiny banners bearing isolated words that express love, loss and longing. The words begin to form syntactic elements and reveal possible fragments of a love letter. 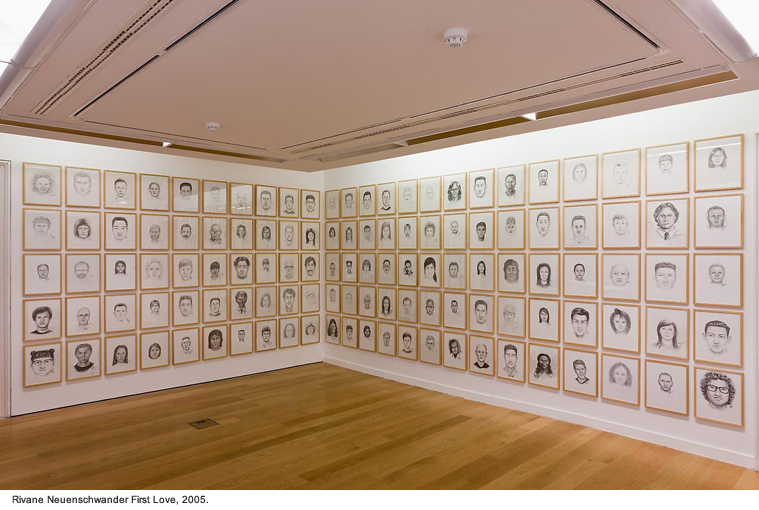