Mural Arts Philadelphia is excited to present Radio Silence, a new project by Iraqi–American artist Michael Rakowitz and curated by Elizabeth Thomas. Conceived specifically for Philadelphia, Radio Silence was inspired by famed Iraqi broadcaster Bahjat Abdulwahed, who lived in Philadelphia as a refugee until his death in 2016.

The project interweaves dreams and memories from Iraq, America, and in-between into a soundscape of the contemporary refugee experience. On July 29, 2017, Rakowitz and Mural Arts Philadelphia will kickstart the project with a large-scale performance on Independence Mall in Historic Philadelphia—the birthplace of American democracy and a site of heightened significance during our current moment in history, when issues around immigration are in the spotlight.

The 90 minute performance will take place at 6pm on Saturday, July 29, with Rakowitz as the host, along with performances and storytelling by members of the local Iraqi refugee community, a takht ensemble led by musician Hanna Khoury, and animal performers drawn from the Iraqi tradition. 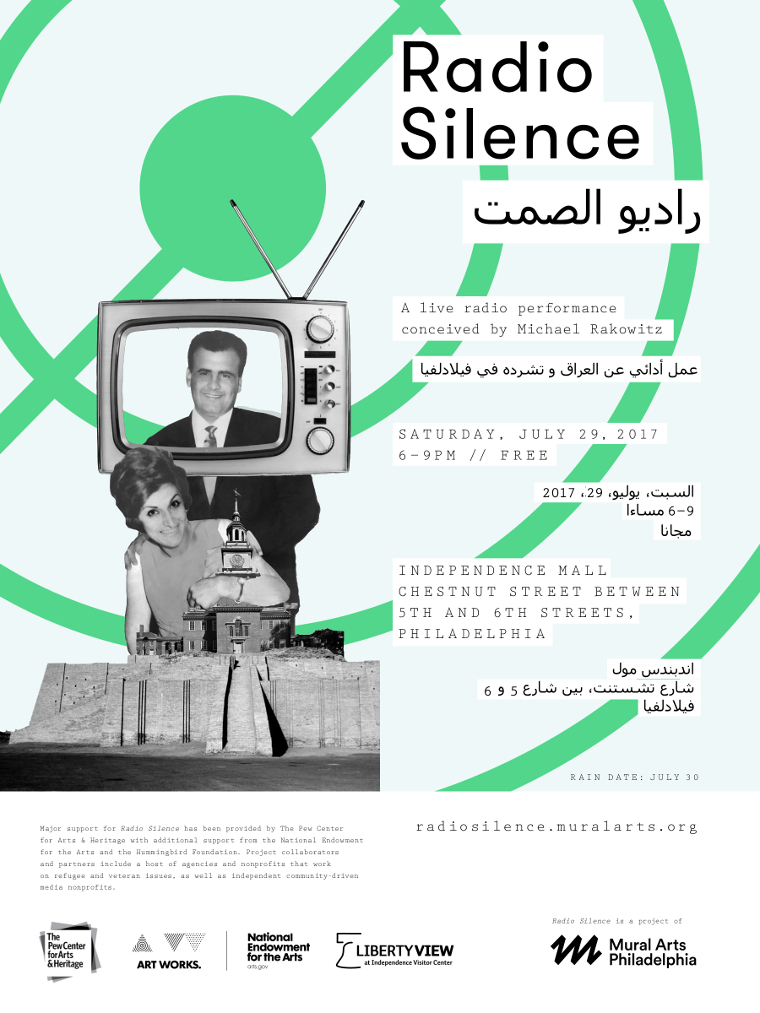 The stage is designed by Philadelphia-based, Iraqi-born architect and painter Mayyadah Alhumssi, as an homage to the famous Iraqi monument the Ziggurat of Ur, viewed with the American monument of Independence Hall in the background. The night will end with a public celebration with music and food from the only Iraqi restaurant in Philadelphia, Amasi Restaurant and Hookah. Both the show and the celebration are free and open to the public.

Radio Silence brings together recordings of Abdulwahed with other Philadelphia-based Iraqi refugees and Iraq War veterans, working with local nonprofit Warrior Writers—sharing their experiences as part of the Iraqi diaspora, and the culture of an Iraq that, due to war and political unrest, no longer exists.

Using first-person narrative, poetry, and music, in English and Arabic, Radio Silence reconstructs a timeline of remembrances spanning the culturally rich Iraq of the 1960s to the decimation of physical and emotional landscapes during and after the war.

The project website radiosilence.muralarts.org will host episodes for download as well as archival images: research, resources, and essays by leading practitioners on performance, Iraqi culture, and music; and contemporary visual art designed by Ryan Hines.

Michael Rakowitz is an Iraqi–American artist living and working in Chicago. His 2011 project, Spoils, invited diners to eat off of plates looted from Saddam Hussein’s palaces. Enemy Kitchen (2003–ongoing) is a food truck serving Iraqi food to Chicago’s hungry public, staffed by veterans of the Iraq War working under Iraqi refugee chefs.

His first US museum survey, titled Backstroke of the West, will open at the Museum of Contemporary Art Chicago in September 2017. Rakowitz is Professor of Art Theory and Practice at Northwestern University. 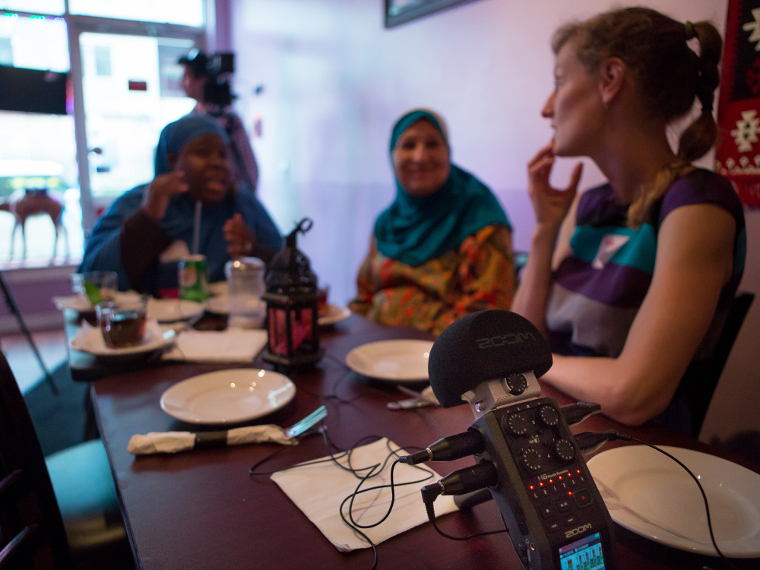 Mural Arts Philadelphia is the nation’s largest public art program, dedicated to the belief that art ignites change. For over 30 years, Mural Arts has united artists and communities through a collaborative and equitable process, creating nearly 4,000 artworks that have transformed public spaces and individual lives.

Mural Arts aims to empower people, stimulate dialogue, and build bridges to understanding with projects that attract artists from Philadelphia and around the world, and programs that focus on youth education, restorative justice, mental health and wellness, and public art and its preservation.

Major support for Radio Silence has been provided by The Pew Center for Arts & Heritage, with additional support from The National Endowment for the Arts, and the Hummingbird Foundation. Project collaborators and partners include a host of agencies and nonprofits that work on refugee and veteran issues, as well as independent community-driven media nonprofits.