Pirelli HangarBicocca presents Digital Mourning, the first major solo exhibition devoted to Neïl Beloufa (b. 1985, Paris) in an Italian institution. One of the leading voices of the generation of artists born in the 1980s, Beloufa’s research focuses on contemporary society and on how it is represented and mediated by digital interaction, often exposing the control mechanisms that have become rooted in our daily lives. In this process, the artist refers to himself as an editor, an assembler that puts together information that already exists only to break it down again and show us the outcome without making any moral judgement. Using the vocabulary of the information age, his works play on the viewer’s sensory experience, inviting them to reappraise their own beliefs and stereotypes.

Digital Mourning, curated by Roberta Tenconi, stems from a reflection on the current times and on the concept of life in our digital world. Right from the title, the exhibition alludes to one of the most striking paradoxes of contemporary society, which is the existence inside a technological world and its parallel disappearance. The association of the two words—“digital” and “mourning”—comes about in the encounter between an artificial world and the absence of life, in a dimension in which life itself is simulated by means of models specially created to understand its true essence. 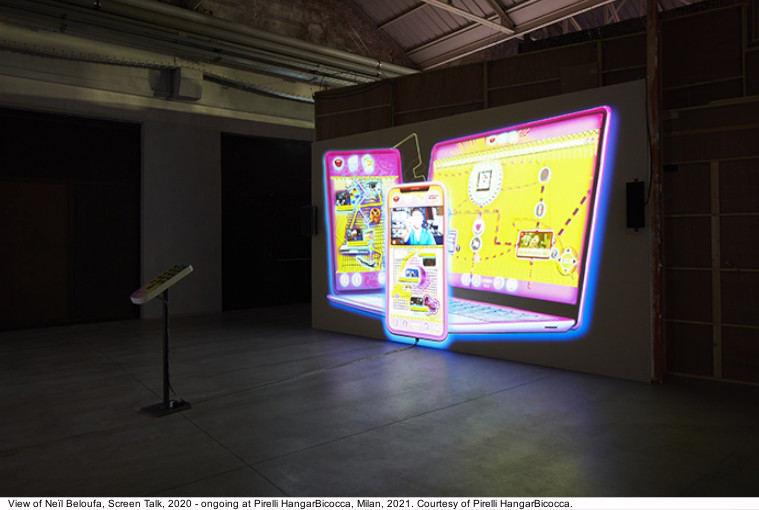 Playing on a combination and intermingling of genres, Digital Mourning is a complex new multimedia installation conceived specifically for the space of the Shed at Pirelli HangarBicocca, presenting, at the same time, a retrospective of Neïl Beloufa’s video works. Resembling the scenario of an “amusement park,” the exhibition consists of a wide selection of works that retrace the artist’s career from his debut with Kempinski(2007) through to his most recent productions as the experimental web-series Screen-Talk (2020-ongoing) and a new expanded version of La morale de l’histoire (2019/2021). Together, these form part of a computerized activation and re-editing system that abolishes any hierarchy between the different types of information.

However, mimicking the current state of affairs, the “attractions” are not always accessible and the exhibition appears to come alive only through a series of narrative voices, the so-called “Hosts.” In presenting the works and explaining the viewers what to see in each area, the narrators introduce and discuss different positions and attitudes, from progressive to conservative, cynical, sincere or optimistic. As a further reflection on the real and virtual dimensions and the value of an artwork, the hosts are also digital entities and are collectibles as crypto-art and non-fungible tokens (NFT), allowing users to trade them on the web as cryptocurrency.

The various installations turn Digital Mourning into an immersive environment, where the switching on and off of one or more works at the same time creates a choreography in which some works come to life while others lie in frozen sleep. While making a new total artwork out of former works, the exhibition is as well adapting the way we consume culture these days, for example by playing with the flux of information and the attention span standard viewers have or by providing QR code links to watch films directly at home.