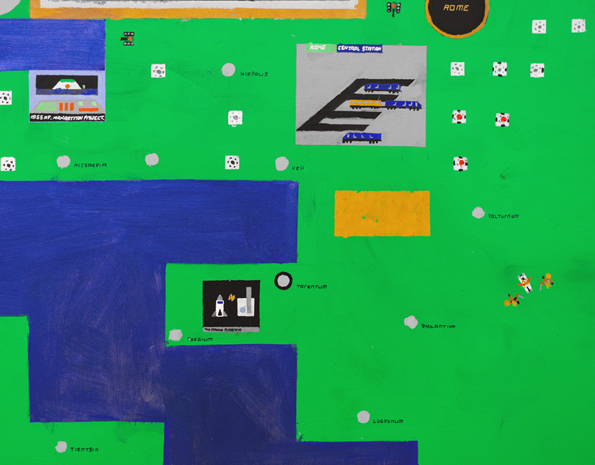 Paul Loubet: 4 X—eXplore eXpand eXploit eXterminate
Paul Loubet is a prolific all-rounder who spreads his painter vocabulary all over the place: canvases, murals, fanzines, objects,  illustrations, flyers, installations in public space… His work draws from a variety of aesthetics and cultural references ranging from geometric abstraction to CGI, from history painting to video games by way of graffiti, urban cultures and science fiction.

For several years he has been more particularly exploring cartographic representations, blueprints, and aerial views, whether in the form of old maps or through new image types like those produced by drones. Paul Loubet is inspired by digital images, to which he applies an elementary rendering while using artisanal methods of production. For example, he paints on floppy discs, creates wooden drones, makes video game consoles out of backlit plexiglas, in a sense reheating the disincarnate world of robotics and computer technology through a manual rendering, a DIY aesthetic rooted in minimal art no less than in naïve art.

The exhibition that the Crac Occitanie is dedicating to his work, presented upstairs, follows his 2021 residency at the Villa Médicis as part of the prize put in place by the Occitanie region in partnership with the French Academy in Rome.
In that context, Paul Loubet conducted research into Civilization II, a strategy and conquest game that consists in creating an empire, by means of nothing less than the destruction of all surrounding others. Civilization II belongs to a broader family of “4X” games (eXplore eXpand eXploit eXterminate). Imperialism and cultural domination, whose final stage would be extermination, are the main thrusts of these games, which reflect a long history of civilizations at their most brutal.

Alongside analysis of the game, Paul Loubet took advantage of his residency to study the iconographic resources of the Vatican’s “Galleria delle carte geografiche”, a 120-metrelong gallery painted by Ignazio Danti between 1580 and 1585, which presents obvious analogies with the isometric views of the game Age of Empires. In the course of his research, Paul Loubet has unearthed the script of a game of the 1990s, the visual inspiration for a series of new paintings.
A large tryptic in the form of an altarpiece represents the end game, namely a world map that sees Rome dominating all other civilisations. Like a game archaeologist—and as if to better conjure up the horror—the artist confronts us with a depiction of the end of the world: the map produced sets out past conquests and destructions, while projecting us into a dystopian future, where a single culture reigns.

From 1990s video games, the artist has preserved the pixelated visual identity, a simple and flat colour palette, and a system of representation with no depth or base line. Across from this tryptic, five canvases zoom in on five of the game’s key dates. If the format that Paul Loubet revisits here refers to historical and religious painting, the deployed motifs stem from mass culture and entertainment as embodied by video games. Shifting our perspective on these different worlds, the artist radically and thoroughly decompartmentalises them.

Pauline Curnier Jardin: Pour la peau de Jessica Rabbit
Pauline Curnier Jardin (born in 1980 in Marseille) is a visual artist, filmmaker and performer who draws from a vast repertoire of references, ranging from Greco-Roman mythology to folk tales, from various religious practices to pagan rituals. The films and the installations, which she often conceives as theatrical stages, reflect spaces of play or popular entertainment, such as circuses, cabarets, carnivals or fun fairs, worlds where all identities, every kind of crossdressing and reversal, is allowed. In a kind of wild and organic ethnology, Pauline Curnier Jardin documents various rituals: processions, pilgrimages, votive festivals…

Her vocabulary stems just as much from extravaganzas as from horror films or Z movies, while being populated by strange characters both grotesque and uncategorisable, or marginal figures roaming the fringes of cities as well as those of social and gender norms.

The historical or mythological characters at the centre of certain films (Saint Agatha, Bernadette Soubirous) are revisited, becoming figures that defy generally accepted ideas and stereotypes, while exposing the viewer to borderline states that derail our understanding of norms and good taste.

The exhibition at the Crac is a chance to plunge deep into Pauline Curnier Jardin’s universe. It is the artist’s largest exhibition to date in France. Several installations were tailormade for the Crac Occitanie’s spaces, making it possible to discover films, drawings and images within a reconstructed Roman amphitheatre, inside a giant placenta, in an archaeological diorama, or passing between the legs of a giantess.

The entire exhibition was conceived in close collaboration with the set designer, costume designer and dancer Rachel Garcia.