As one of the most active conceptual artists in Hong Kong, Ching twists the roles of artist and observer within and beyond the city. He breeds a discursive system with a wicked sense of humour, responding to and interrogating the cultural and political collisions occurring in Hong Kong. The title Glitch in the Matrix is borrowed from the film The Matrix, in which protagonist Neo gets a feeling of déjà vu when he sees the same black cat appearing twice. This is a result of a glitch in the matrix, leading to changes in the coded virtual world. In Ching’s case, his daily experiences often make him feel caught between a sense of déjà vu and jamais vu, leading him to question whether there is a glitch in the system. 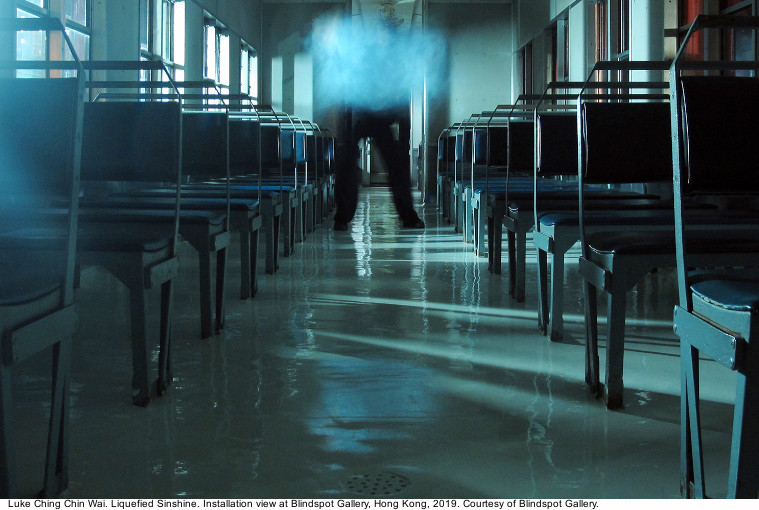 On view in the exhibition are over ten of Ching’s early works, alongside new commissions, revealing political perspectives that are relevant to the current social climate in Hong Kong. In Whisper, Ching recorded the bird sounds in Hong Kong Museum of History’s Hong Kong Story exhibition. These echoing chirps evoke caged birds and, in this new presentation, the artist broadcasts the recording from a loudspeaker to the world outside the exhibition’s window as a metaphor for the release of those who are victims of daily predicaments.

In new work Still Life, Ching depicts everyday objects in the style of conventional still life drawings. Represented in these scenes are the few objects allowed to be brought inside Castle Peak Bay Immigration Centre by visitors meeting detainees. The prolonged period of solitude spent drawing these objects also allowed Ching to meditate on the blurring of the passage of time experienced by the incarcerated refugees and asylum seekers. Other works in the exhibition invite the audience’s participation, such as a work which sets out the rule that the audience has to take off their left shoe before entering the exhibition space.

In Cold Calling, Ching invites the audience to use a landline telephone installed in the exhibition to randomly call a number from a Hong Kong phone book from 1997, that might or might not still exist. The mutual interference of works in the exhibition space builds unexpected connections all the while pointing to the daily experience of imbalance encountered through the occurrence of recent events in Hong Kong. 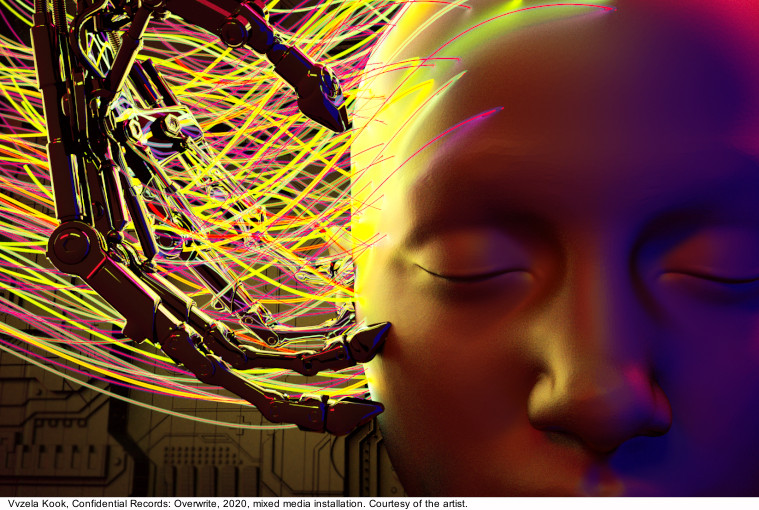 Confidential Records: Overwrite, a solo exhibition by Hong Kong-based artist Vvzela Kook, presenting three chapters of Kook’s science fiction series Confidential Records, ongoing since 2016, and which originated in Kook’s extensive research into the history of Kowloon Walled City, Hong Kong’s vanished legendary neighborhood. She draws inspiration from scientist Ray Kurzweil’s Law of Accelerating Returns to extrapolate a future in which the development of artificial intelligence is so advanced that it threatens the existence of humans. In Chapter 1, Dual Metropolitans, Kook constructs a fictional futuristic cityscape under the rule of AI, and reimagines the underground Kowloon Walled City as the last line of defence for the human race. In Chapter 2, Executions, the clash between AI and humanity reaches a climax, reflecting a universal condition of individual resistance in dystopian societies, and the parallelisms and entanglements between different totalitarian regimes in the past, present, and future.

Newly commissioned for this exhibition, the eponymous third chapter, Overwrite, takes the form of a multimedia walk, where the audience is invited to follow a route out of the exhibition space and into the streets near Para Site, guided by a series of clues and instructions. These are laid down by the main character in the piece, an AI entity who had switched allegiance to humanity’s side and now acts as a detective into the ideological transformation enforced on humanity by its AI rulers.

Kook’s works denote a highly imaginative and all encompassing visual language, inviting the audience to an intense experience in her mixed architectural and cyber space, built through spatial and sensorial manipulation of the exhibition environment, 3D-printed objects, videos, and interactive installations.

The exhibitions are curated by Para Site Curator, Celia Ho.