The birth of conceptual art has long been associated with the collapse of the gold standard in 1971. With one decision, the value of the dollar was no longer backed by the intrinsic value of a physical commodity, but instead became immaterial, opening financial markets up to greater speculation and volatility.

At the same time, contemporary artists adopted similar tactics, distancing themselves from objects in order to avoid the forces of the market. Yet, these market forces are all-pervasive.

With each downturn and recession, it has become ever more apparent that a handful of investment banks and corporations hold immense power over our everyday lives. Neoliberal Lulz brings together work by five artists who interrogate this relationship and respond by adopting corporate strategies to their own ends. 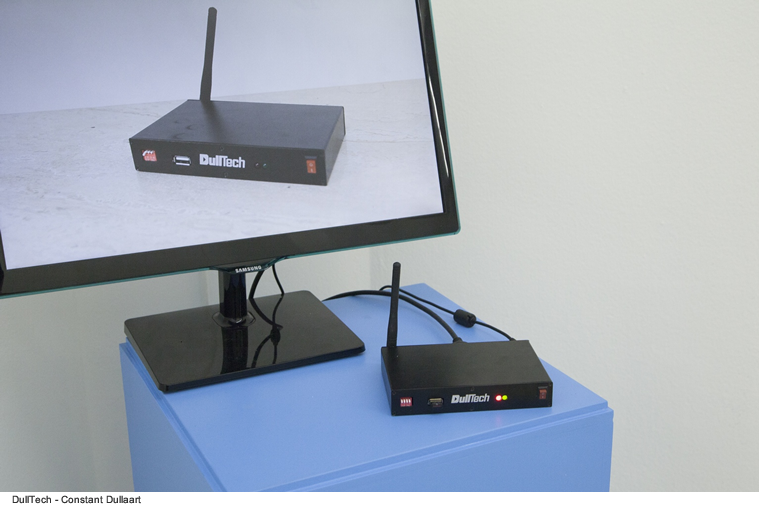 Constant Dullaart’s business DullTech™ exists as a fully-fledged technology start-up. The DullTech™ Media Player is, in the words of its inventor, a ‘smart, hassle-free, plug-and-play USB-friendly media player that works on all screens and syncs without problems or cables.’

Conceived in 2012 during the artist’s residency at OCAT Shenzhen, China, DullTech™ grew out of a frustration with the common difficulty for syncing video files across diverse hardware.

Dullaart decided it was time for a media player that could make life simple, one box which could ‘get rid of remote controls, expensive AV professionals, stress and drama.’ DullTech™ is at once both a hardware start-up and a performative artwork. 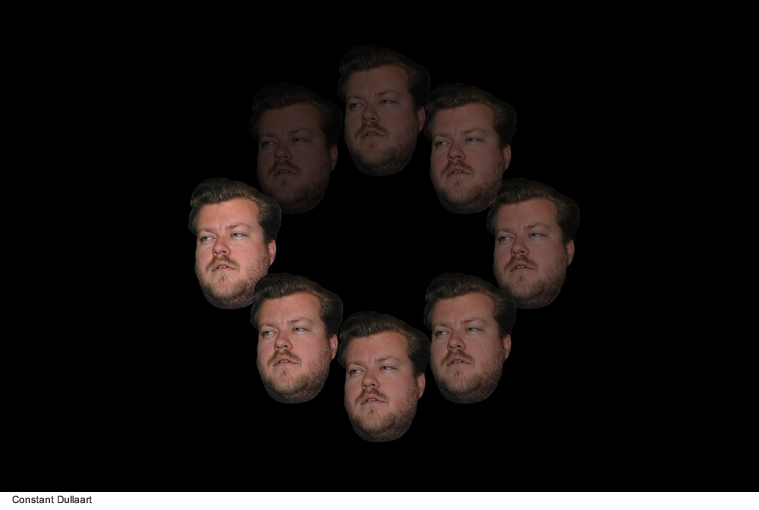 It creates technologically simplified or ‘DULL’ products as a form of radical corporate production, both in tune with and subverting this age of high-efficiency capitalism. A retort also to the rise of ‘cool-hunting’, which sees industry stealing creative ideas from artists and pitching them back as trends, Dullaart’s ‘DULL’ technology circumvents this dynamic from the outset.

The artist is at once the creative, developer, marketeer, and venture capitalist, placed to cash in on any commercial success. Going one step further, Jennifer Lyn Morone has incorporated her person as a registered company Jennifer Lyn Morone™ Inc, with 10,000 shares available for purchase on the occasion of the exhibition.

Corporations enjoy many human rights and have a variety of privileges not extended to individuals, and so Morone has addressed this imbalance by engineering a new business model for her own ‘human corporation’. 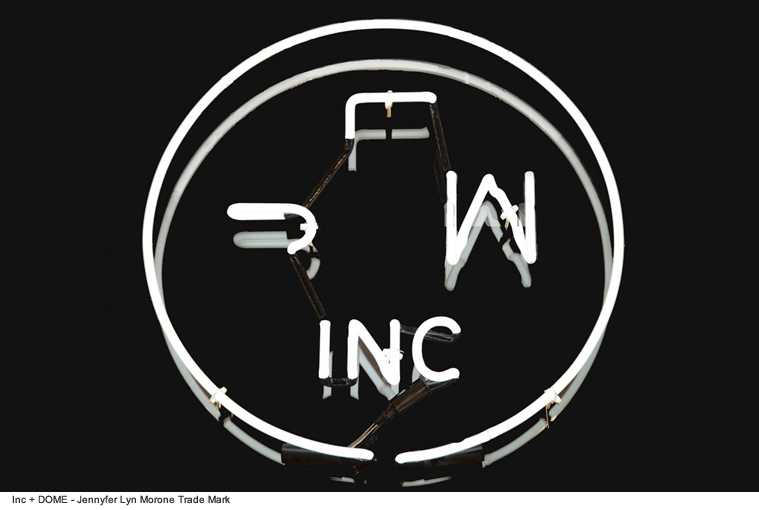 Describing the contemporary condition as one of ‘data slavery’, Morone responds to the multi-billion dollar personal data industry by reclaiming the individual’s right to the data they produce. JLM™ Inc is currently developing a software called DOME (Database Of ME) which will allow users to collect, track, analyse and monetise the data they generate.

Taking direct ownership over her own personal data, Morone offers it for sale in categories including demographic, lifestyle or health, among others. Her identity is also fully branded, with trademarks applying to not only the company name but also the smile, sound, gait and image of Jennifer Lyn Morone.

As the business grows, JLM™ Inc looks to capitalise on a variety of other possibilities for corporate revenue through its subsidiary companies, ranging from a line of cosmetics made in Morone’s biometric likeness to marketing the artist’s organs. 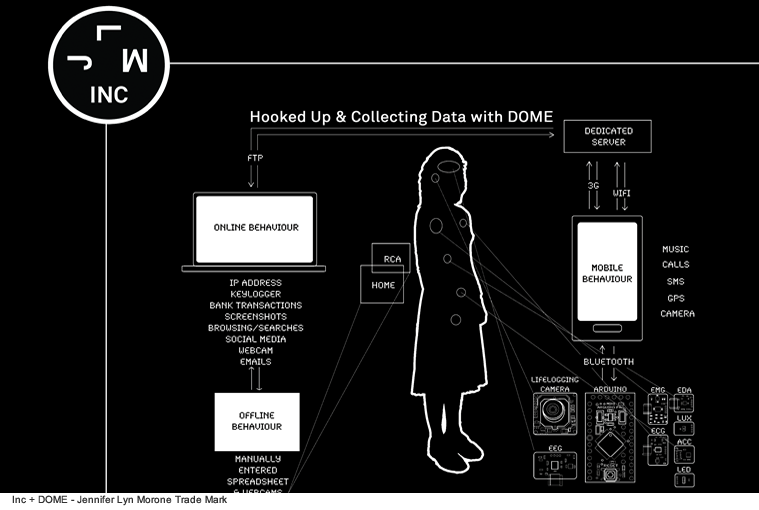 While this approach may appear as playful satire, it is made all the more sobering by the fact that each of these ideas are entirely possible within the prevailing corporate environment and reflect existing industries and markets. At Carroll / Fletcher, JLM™ Inc will debut a ‘Behind the Scenes’ film showing the inner workings of the corporation, as well as a manual educating readers on how they might become Incorporated too.

Émilie Brout & Maxime Marion’s Untitled SAS (2015) takes its name from ‘société par actions simplifiées’, the French equivalent of a registered limited company, much like ‘Ltd.’ or ‘Inc.’ in English. A limited company with ‘work of art’ as its sole corporate mission, the work’s only physical manifestations are its certificate of incorporation and share register.

Indeed, Untitled SAS’s corporate capital is readily available in the form of 10,000 shares for purchase online. Having bought into a company-cum-artwork, each shareholder is at once an investor and a collector, and as such is able to trade shares at the price they have set and influence both the company and artwork’s overall value. 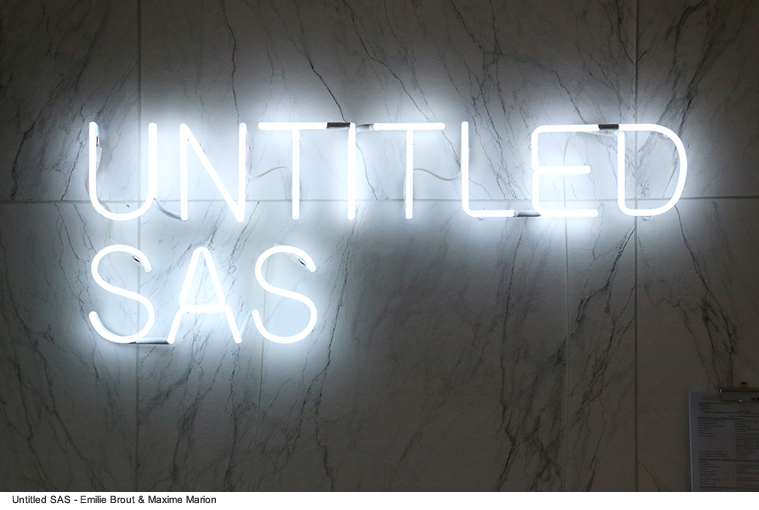 In this sense, this fully functional corporate shell performs and mirrors the art market, where the value of a work of art resides in its cultural capital, and in the ability of invested parties to manipulate it to their will.

Les Nouveaux chercheurs d’or (The New Gold Diggers) (2015) is a series of samples of artificial gold products obtained for free online by the artists posing as a company. These items that may appear precious but have little intrinsic value, are part of the artists’ research into ideas of worth and wealth creation.

From the extensive description printed beneath each sample, it becomes clear that each one has required huge amounts of technical and human resources to produce, often passing through several different countries in the process. Adopting an approach similar to that of an archaeologist or naturalist, the artists track the way in which luxury is fantasised and consumed. 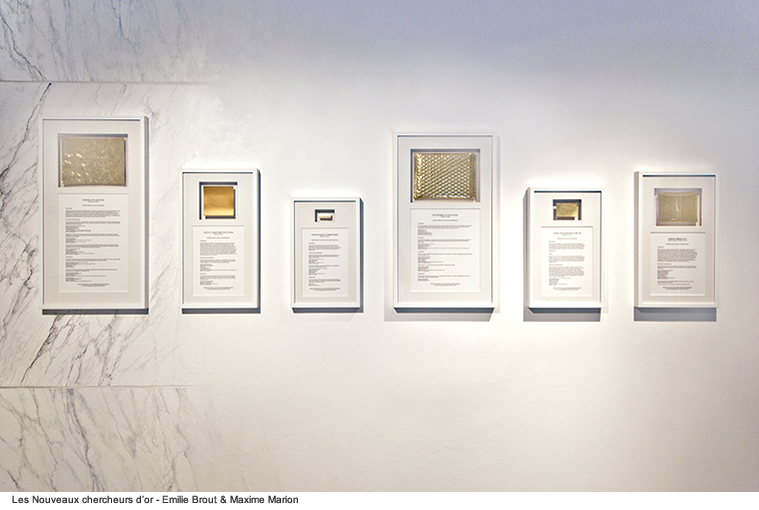 Striking at the core of the capitalist system, Femke Herregraven investigates how financial markets shape demand. Infinite Capacity Al13 (2015) reveals the warehouses where huge volumes of aluminium are stored by investment banks to enable financial manipulation.

An array of works also explore the phenomenon of High Frequency Trading, described by the artist as ‘one of the most opaque, automated and sped-up processes of the present moment’.

A three-part series, A timeframe of one second is a lifetime of trading (2013-16) draws attention to the speed of these transactions, the semiotics of the naming of such algorithms, and maps the dissemination of such trades over time. Rogue Waves (2015) is a series of metal sticks, laser-cut with the outline of a trading pattern in which algorithms illegally manipulated financial markets. 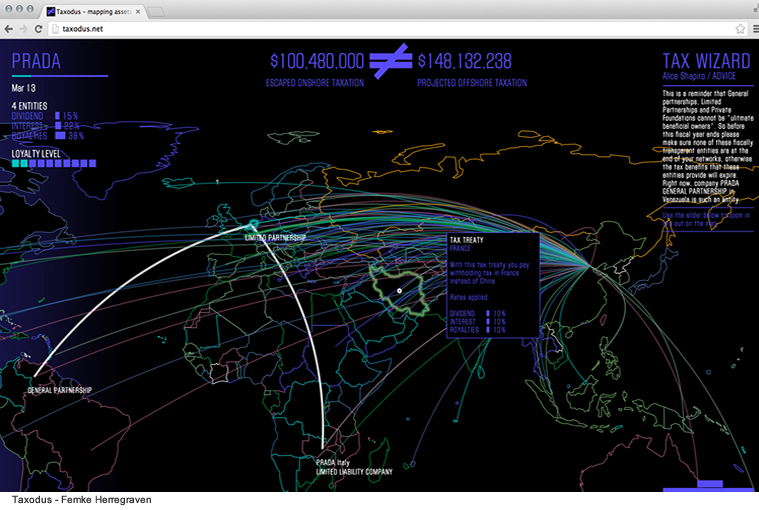 Drawing on ancient trading customs, the form references the tradition of the tally stick, bones or wooden batons once used to record value and transactions. Finally, an online game Taxodus (2012-13) invites visitors to weigh their options and try their hand at offshore investment and global citizenship in order to avoid taxation and become elite players in the world economy.