On the occasion of LOOP Barcelona and the 50th anniversary of the London filmmakers’ Co-op (LUX—artists’ moving image), pioneer British filmmaker Malcolm Le Grice will present for the first time in Barcelona Film Image, Colour and Improvisation, a double performance at Capella MACBA.

The event will unfold as the reenactment of Horror Film 1 and Threshold, two film projections and live performances that are considered key works of expanded cinema. Horror Film 1 (1971, 12 minutes) is a live performance work, first presented in 1971. It shows three layers of changing colour on 16mm film, mapped by Le Grice’s body as he moves away from the projection, exploring the presence of the body and its complex colour shadow. Jonas Mekas has said of Horror Film 1: “One of his most simple, most classical, and also most ecstatic pieces.” Jonas Mekas, “Village Voice”, October 11, 1973.

Threshold (1972, 17 minutes), explores the concept of an edge, one where transformations occur or are restricted, such as the border of a state; or where one optical experience transforms to another; or the point at which abstraction occurs. The performance is a live improvisation by the artist experimenting with the abstract colour fields of the film by moving the projectors. 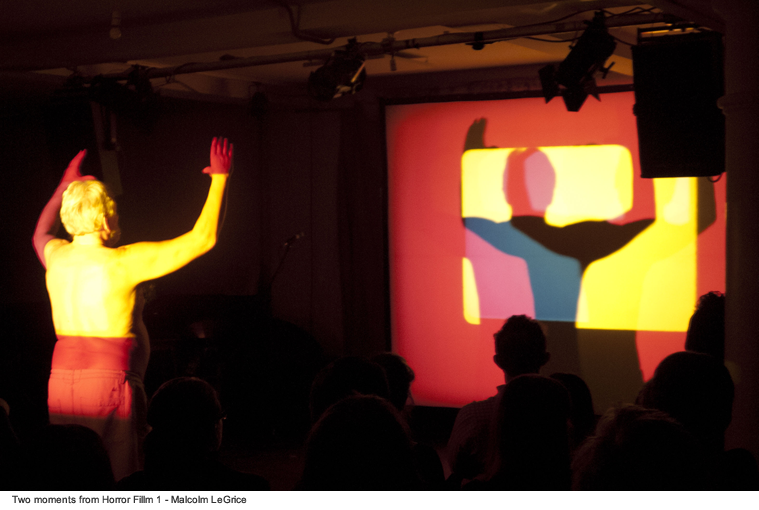 “All my work with film and video has been concerned with the primacy of presence over representation. Working initially as a painter, I have always taken pleasure in colour and the image. At the same time, an early experience of playing Jazz led to a continuing influence of improvised musical form and improvisation. When I started to experiment with film I found that I could combine my delight in the visual image with exploration of time that drew more on music than the traditions of cinema.

Working outside the narrative film industry, by printing, developing and editing my own material, I could improvise the making of a film without a script—the film emerged from an immediate and flexible creative process. Then my growing engagement with live film projection event itself, led me to make multi-screen and improvised performance works.” Malcolm Le Grice, 2016 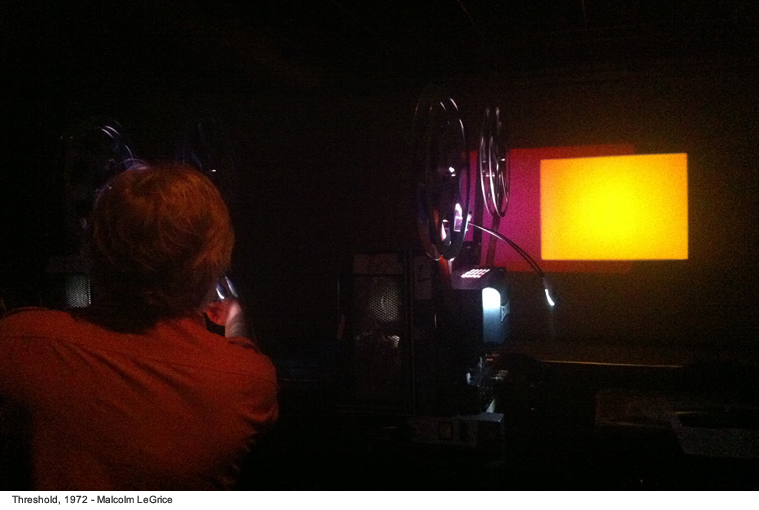 Malcolm Le Grice (Plymouth, 1940) is regarded as one of the most influential figures in British modernist cinema and performance. Trained as a painter, he soon began to make film and computer works, while later shifting to digital installation. He has produced a vast body of work since 1965 incorporating single-screen films, expanded cinematic performances, and three-screen digital video works. Flexible and responding to changes in technology formats, his work concerns “the primacy of presence over representation”—as in the artist’s own words—and explores the transformation of images and perception.

The artist will also participate in LOOP Talks, “Ways of Filmmaking” together with theorist Erika Balsom, on Thursday, June 2, 9:30am. The conversation will review the historical trajectory of the London Filmmakers’ Co-op, Le Grice’s contribution to it and discuss the current status of art filmmaking and cinema. Le Grice’s 1970 film Berlin Horse will be on view in this year’s selection of videos at LOOP Fair, presented by Richard Saltoun gallery, London, from June 2 to June 4.