Larissa Sansour: In The Future They Ate from the Finest Porcelain

Lawrie Shabibi is delighted to announce In the Future They Ate From the Finest Porcelain by Larissa Sansour. The exhibition will present screenings of her most recent film—of the same name—together with an installation and three large-scale photographic works. Through the film, Sansour examines the politics of archeology and how myths of the past can become historic interventions with the power to create nationhood.

The film is a combination of sci-fi and archival imagery set against a mesmerizing musical score and ambiguous time and place. At times it projects itself into the past and at others propels itself into the future with a view to creating a manufactured history.

A female protagonist who describes herself as a “narrative terrorist” is questioned by her interlocutor, whose identity remains unknown and is open to speculation—is she a journalist, a psychiatrist, or an interrogator? The protagonist tells of being part of a resistance group seemingly on the brink of the apocalypse where “archeology is the frontline.” 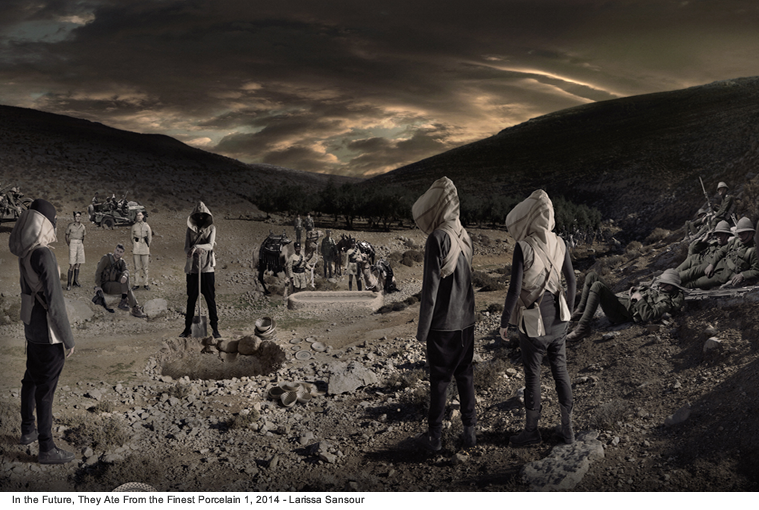 The weapons of this unknown opposition group are elaborate porcelain decorated with the Kefiyyeh motif typically worn in Palestine and symbols of their decades of resistance. In the film’s most dramatic scene, these porcelain pieces, which belong to an entirely fictional civilization, are delivered to their location and buried into the ground.

These are “the facts on the ground for future archeologists to excavate,” their aim to influence history and support future claims to their vanishing lands: once unearthed, this tableware will prove the existence of this people.

The exhibition also includes three large-scale photographs that feature archival images taken from the Library of Congress’s archives and UNRWA to make a pan-historical collection of the various occupying forces in Palestine through the ages. 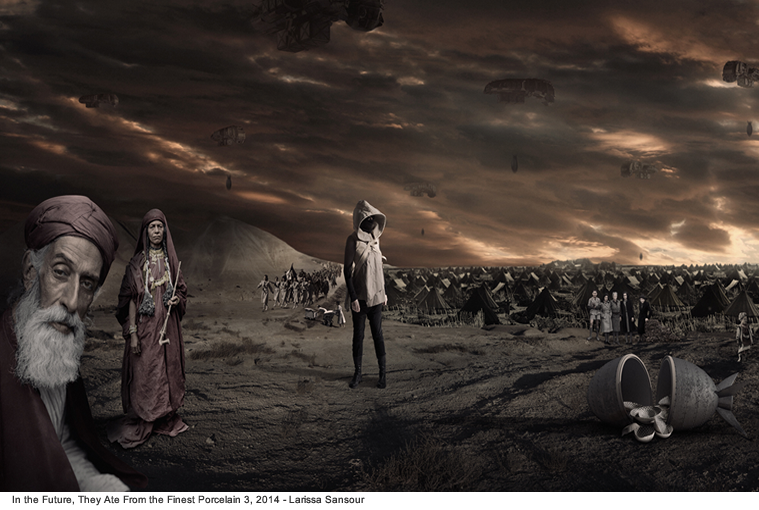 Finally, Larissa Sansour presents an installation depicting an assembly line that appears to have been abandoned halfway through the creation of the fictional porcelain plates. Deliberately crude, the work highlights how our past can be systematically controlled and fabricated.