Katja Davar: On Cables and Cumulus 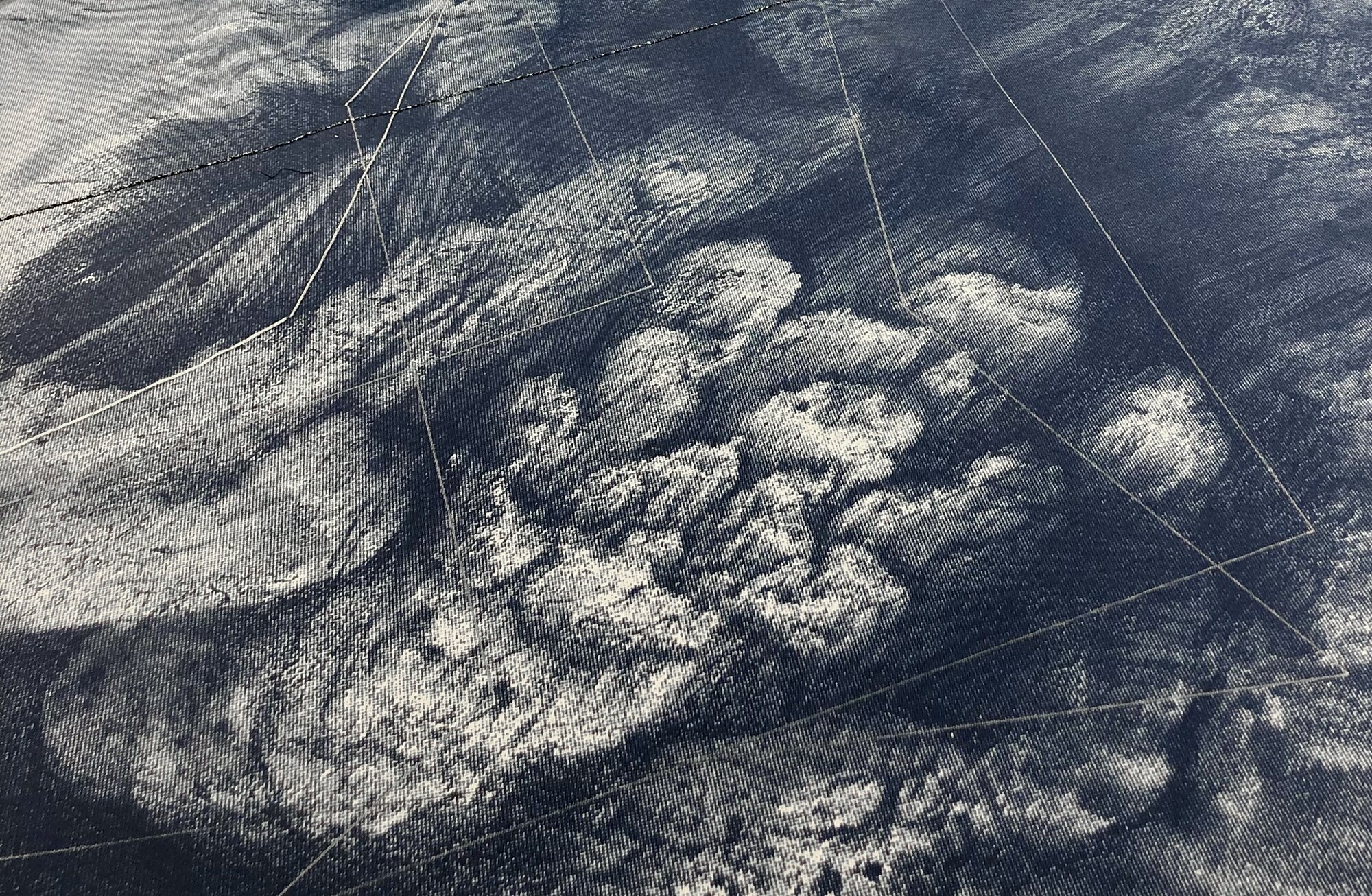 The Goethe Institute / Max Mueller Bhaven Kolkata is delighted to announce the opening of On Cables and Cumulus which includes two new permanent site-specific artworks by Katja Davar.

Davar works around the idea that the central metaphor today for the internet is the cloud. The internet itself is inherently difficult to grasp yet it is a place of great power and energy. On the one hand, we are attracted to the romantic notion of the cloud, on the other hand, the metaphor is actually misleading as our cloud is not weightless, amorphous or invisible, it is a physical infrastructure consisting of phone lines, fibre optics and enormous warehouses filled with computers consuming excessive amounts of energy and water. Davar is interested in examining the cloud as a relatively new industry, but one that not only has a shadow but also a footprint. Today’s clouds are both environmental, political and opaque.

In the main stairwell, a seventeen-metre-long textile work digitally collaged from Davar’s pencil drawings of clouds, cascades through the building. The cloud hanging is titled Myth, Knowledge, Industrial Logic. Together with the team of Nilanjana Ghosh from West Bengal, Davar engaged in collaborative embroidery workshops where new and imaginary embroidered routes were created on the hanging, as a form of layered storytelling in and through the clouds. Davar sees in the cloud immense horizons of interpretation, from technological computation to contemplation. The cloud is an archive of memory, information and imagination.

The Installation explores the relationships of fibre optic cables on the ocean floor which mirrors the paths of European vessels from the 17th and 18th centuries. A second work titled At Depth the Bending / Old New World is crafted in pencil showing abstracted shipping routes, culled from 17th and 18th century shipping logbook data. Hovering above the shipping routes, underwater submarine cables make their way from one side of the wall to the other. Many of the fibre optic cables from India often run directly back to Britain before they go anywhere else in the world. Through this, Davar concludes that an invisible contemporary imperialism re-scripts the old lines of the empire. This execution of this drawing is realized together the artistic team of Sumantra Mukherjee.

Katja Davar is an artist working at the intersection of drawing and animation. Her work explores current topics through reaching into the past and transporting into the present. She is interested in the impact of new and old technologies, one important strand in her work is an ongoing exploration of Mesopotamian cuneiform, the oldest form of writing, which dates back to around 3,300 BC. Davar partly draws on cultural strands that also refer to her own origins – she has Persian ancestors but was born and raised in London and naturalized as a German. Utilizing various sources – codes, writings, diagrams and literary texts – Davar develops visual metaphors for fundamental realities that are often hidden from view, such as data clouds or deep-sea cables. In this particular work, she questions the traces of colonial imperialism that shape our present.

Her drawings as well as her animated films reveal a philosophical skepticism towards claims to truth that go hand in hand with claims to power; these are contrasted with aesthetic forms of representation that are simultaneously complex and poetic.