Katja Aufleger in the exhibition “Gone”

The first solo exhibition in Switzerland by Katja Aufleger (born 1983 in Oldenburg, lives and works in Berlin) brings together works from the past decade: breakable sculptures, hazardous chemicals and video works. With transparent materials such as glass, plastic and coloured liquids, but also immaterial components like sound and movement Aufleger develops fragile installations and films. At first glance, the objects seem familiar and appealing, but on closer inspection it becomes clear that the works are inhabited by uncertain or even dangerous tensions. Using this kind of ambivalences, the artist criticises institutions and questions power structures and systems. The exhibition GONE will be on view until March 14, 2021 and will be accompanied by a catalogue that provides a comprehensive overview of her work. 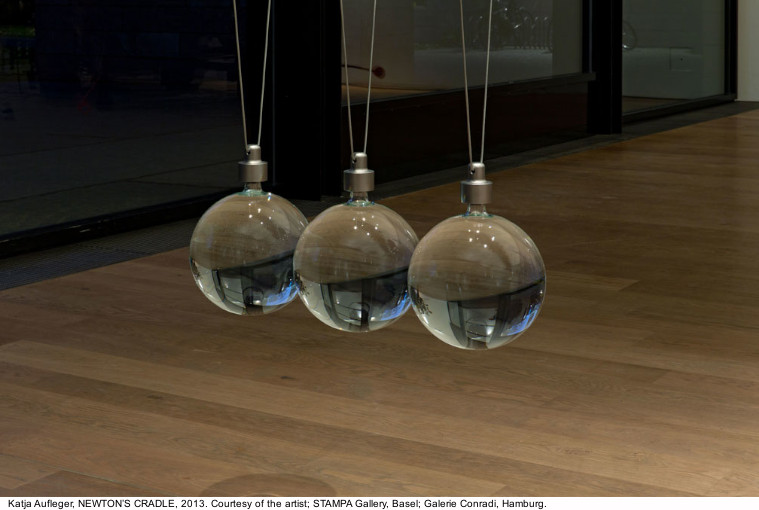 Potential destruction
In the main hall at Museum Tinguely, three round-bottomed flasks filled with transparent liquid hang from the ceiling on steel cables. Entitled NEWTON’S CRADLE (2013/2020), this work is an oversized version of a desktop toy in which the collisions of five suspended metal balls demonstrate the transfer of kinetic energy. If one were tempted to do the same with Aufleger’s glass spheres in the exhibition space, however, the destructive power would be enormous, as the fragile vessels contain the three chemicals needed to make nitroglycerin.

Video works as illustrative models
Whereas here the destruction remains a theoretical possibility, in LOVE AFFAIR (2017) glass really does burst. In close-up, the video shows light bulbs against a dark background. The silence is suddenly broken by a loud bang. One after the other, the lamps are destroyed by projectiles. This discharging of tension remains caught in an endless loop, however, oscillating rhythmically between attraction and danger. Both challenging and inviting, Aufleger’s art develops its full power when the destructive moment of change—either real or imagined—sets in. 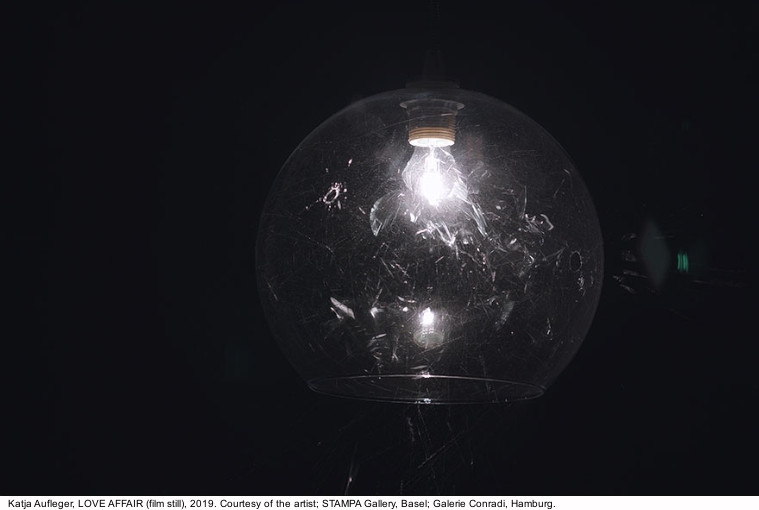 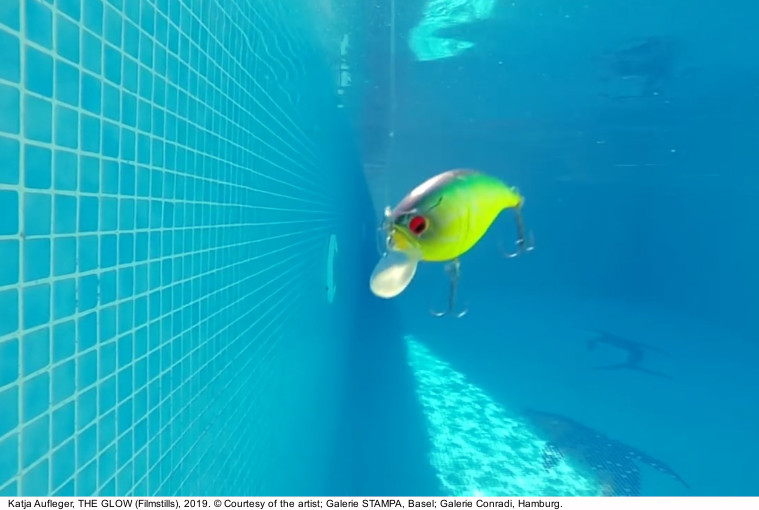 In her video work THE GLOW (2019), we see fishing lures being dragged through swimming pools. Different underwater shots alternate at short intervals, with changing perspectives, surroundings, light conditions and lures. We hear a rhythmic clicking or clacking, sometimes matching the movements and then out of synch with them. These are excerpts from fishing tutorials in which anglers demonstrate the effect of the lures. The rubber fish become marionettes in an amusing puppet theatre or animated avatars in a digital world. The wobbly videogame aesthetics of these amateurishly produced films against a background of blue-tiled, deserted underwater architecture appears apocalyptic, and at the same time humorous.

Multimedia and conceptual art
In order to materialize her sculptural ideas, Aufleger either uses a video camera or shapes clay with her own hands. But for precise results, she also has her ideas realized by glassblowers or programmers. Loops, grouping and repetition generate cyclic systems with no beginning or end. The artist strips out familiar structures or methods, freeing them of their routine connotations and filling them with new possibilities. In this way, she creates spaces of imagination by repurposing materials in surprising ways. Aufleger’s works critique institutions, question roles and cross borders: curators bring even the most explosive works into the museum, while the audience becomes the most important player in her conceptual games.