The pioneering practice of Joan Jonas (New York, 1936) across performance, experimental film and video-installation will be showcased in Joan Jonas: stream or river, flight or pattern, an exhibition to be held at Fundación Botín (Santander, Spain), from June 25 to October 16, organized by Benjamin Weil, artistic director of Centro Botín.

At the core of the exhibition is a new multimedia installation that will be produced on site, in collaboration with a roster of fifteen international young artists Joan Jonas has selected to participate in the three-week workshop she will direct at Fundación Botín’s Villa Iris—from June 6 to 24. In this new work, she will further explore the complex relationship of human beings with nature and the environment, a constant concern throughout her long-standing practice.

The presentation of this new work will be complemented by a selection of films related to 5 important performances the artist has staged in the past fifteen years: Lines in the Sand (2002); The Shape, The Scent, The Feel of Things (2004–06); Reading Dante (2007–10); Reanimation (2012); They Come to Us without a Word (2015). These works will offer the visitor a rich perspective on the performance work of this prominent figure of the New York avant-garde of the late sixties and early seventies and key protagonist of performance art. 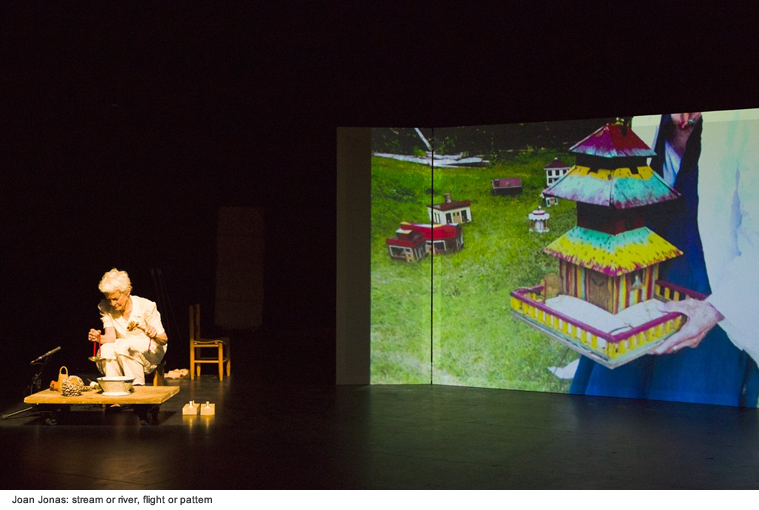 A native of New York, Joan Jonas graduated with a BA in Art History from Mount Holyoke College in 1958 before going on to study sculpture at the School of the Museum of Fine Arts in Boston. She furthered her training in drawing and poetry while at Columbia University, where she received an MFA in Sculpture in 1965. Her encounter with the work of Claes Oldenburg, Yvonne Rainer and Simone Forti convinced her to expand her artistic practice and stage actions, in which she soon became a main protagonist. While sculpture and drawing have continued to be essential in her work, performance enabled her to add sound and the spatiotemporal dimension, something that also enabled her to refer to film as much as to dance and theatre.

Says the artist: “Performance is the medium I use to construct an object that only exists in time, and which is worked out in space with bodies, with my body. Performance for me is three-dimensional live poetry in space.”

Joan Jonas: stream or river, flight or pattern is her first exhibition in Spain since the one held at MACBA (Museu d’Art Contemporani de Barcelona) in 2007, and is curated by: Benjamin Weil