A gigantic baby, a foppish boy and a drowned man weep, drool and eat grotesque sandwiches of shit, corpses, flags and masks, failing to learn anything. A nameless crowd careens down a hole, forever—or forms letters in choreographed formation. A spartan, looping piano piece by Jürg Frey is performed in a concrete cell, a hermit’s cot and a bucolic garden in midsummer.

Ed Atkins is one of the most distinctive representatives of a generation of artists explicitly responding to digital media’s ever-increasing ubiquity; Atkins creates worlds of crazed artificiality and desperate realism. His computer-generated videos feature shabby, lonely protagonists with disarming and marked fidelity. 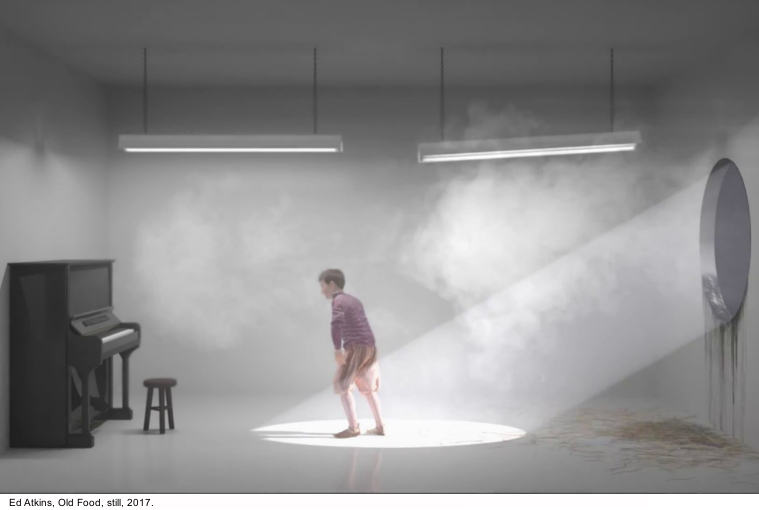 His animations demonstrate their digital constitution—their near-total artifice—even as they simultaneously strive for a disturbing level of lifelikeness. Atkins’ works get under the viewer’s skin, rendering a queasy corruption of substance, both material and concept—just as the idea of “old food” raises a suspicion of use squandered, of goodness spoiled.

For his exhibition at the Martin-Gropius-Bau, Atkins has created a new series of works that build upon the allegorical possibilities of his particular brand of video making, shifting the aesthetic into ever more precarious areas of desire, historicity, melancholia and stupidity. Atkins is known for a series of video installations peopled by CGI surrogates, animated by motion capture performances and voiced by the artist himself.

In his more recent work, the artist has expanded his exploration of the medium, tempering affecting autobiographical figuration with broader issues arising as a consequence of the form’s exponential preponderance. Where previously death was the precondition of love and the logical end point to the wants of representation, Old Food presents a system that’s at once less morbid and far less romantic.

The world of Old Food is always-already lost, persisting regardless, with no mortal redemption in sight. Like McDonald’s hamburgers, Old Food never rots, never moulders—it simply persists, a world of melancholy where what was lost remains outside the possibility of ever being understood, let alone retrieved. 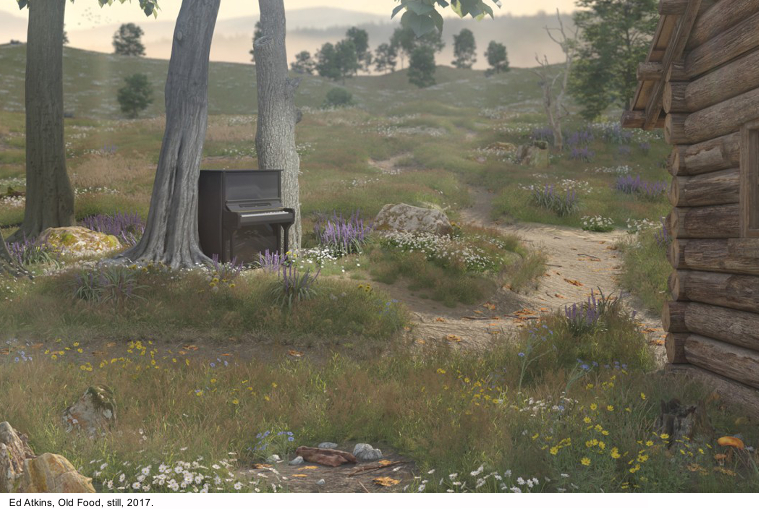 Old Food is Atkins’ largest installation to date. Videowalls and flat screens depict a choreographed chamber drama of dubious sentimentality and historical inaccuracy. Caricature and parable collide in a nostalgic no-place of derailed escapism, conjuring both recent Fantasy television phenomena, and any fantasy’s failure to distract from a resurgent literalism concerning the romantic possibilities of the imaginary.

Unlike much of Atkins’ previous work, Old Food is slow—hobbled and exhausted by its own apparent superficiality. Still, Old Food moves, caught in a concert of sad, pitched inwards and out. These new computer-generated video works are installed alongside a vast display of the Deutsche Oper Berlin’s costume archive, presented as objet trouvé in the manner in which they are stored.

Part perverse mise-en-scène, part practical acoustic treatment, the costumes invite a reading of the videos as aspirationally operatic and as compromised historical dream—both in their failure to sufficiently address their contemporary moment, and their presumed locale, from 11th century Scotland to ancient Egypt to Berlin, and the world, today. 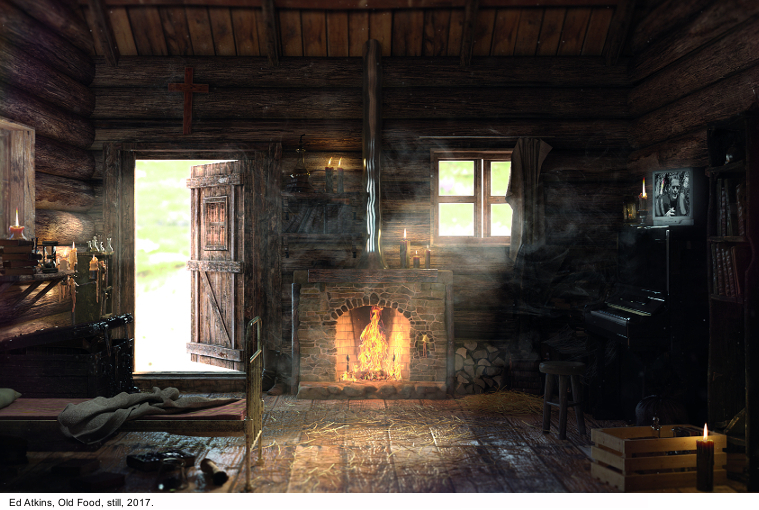 Just as the costumes are displayed in a manner to subvert their role as instruments of immersive storytelling, Atkins’ videos constantly undo both their realism and their elaborate technology. The effect, ironically enough, is one of genuine imminence.

Ed Atkins (b. 1982) lives and works in Berlin. An anthology of his texts, “A Primer for Cadavers”, was published by Fitzcarraldo Editions in 2016.