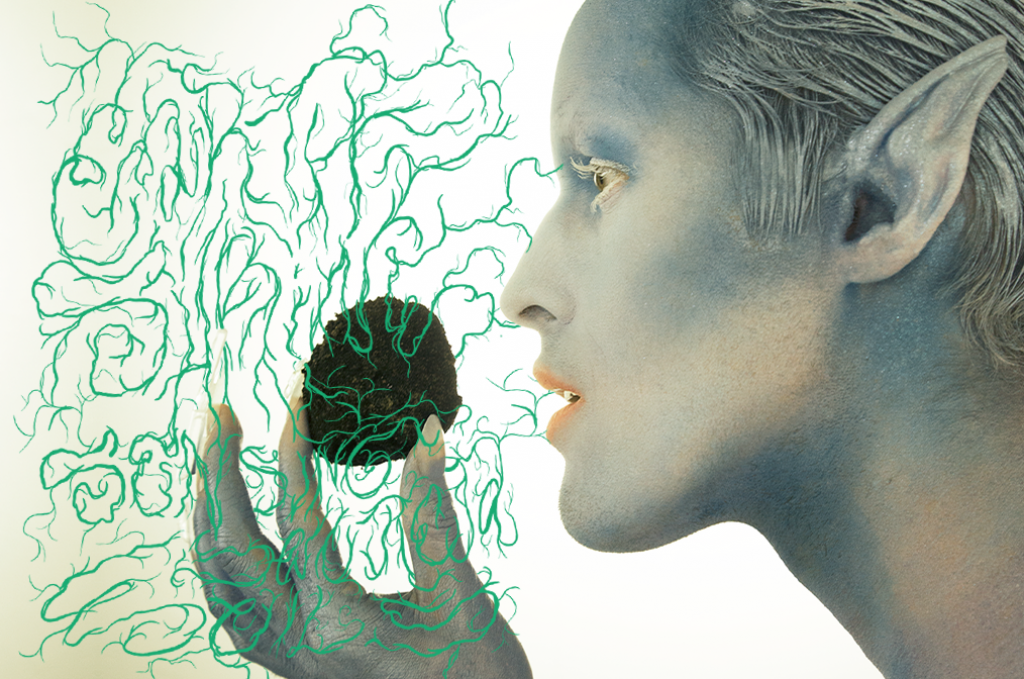 As the bright, translucent greens of spring gradually deepen to robust summer shades, a spacecraft has landed in – or is ready to fly away from – MU’s dark exhibition hall. The large concrete space is transformed into an EARTHSHRINE , a sacred place dedicated to mytho-ecological research on the sacred nature of earth and soil, the creation of stories, dance, exchange and contemplation. From 13 May till 26 June, artist and modern-day druid Jasper Griepink presides over a faerie-futuristic world of fertile soil, where besides visiting the exhibition, you can participate in rituals and performances on two special weekends. 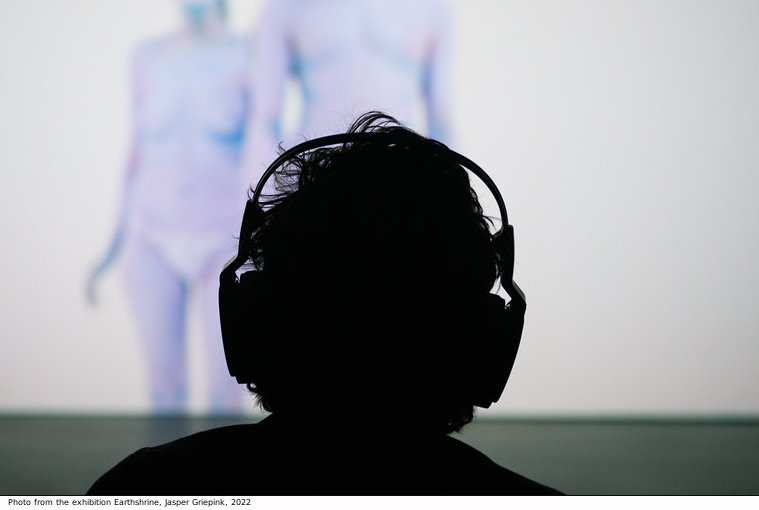 Let’s acknowledge that we need kinder, more-than-human relationships. Human activity is causing world-wide pollution, exhaustion, warming, melting, and mass-extinction. It threatens to end much of life on Earth, humans included – and still this idea that nature would be a given, only there for humans to use, lingers on. Humans find it very hard to think themselves out of the centre. As contemporary philosopher and feminist theoretician Rosi Braidotti puts it in The Posthuman, we need to start seeing intelligent vitality or self-organizing capacity as a force that is present in all living matter, as it is certainly not only reserved for humans.

In Staying with the Trouble, Donna Haraway introduces Terrapolis, an equation for guman, for humus, for soil, for ongoing risky infection, for epidemics of promising trouble, for permaculture. Terrapolis is not ‘posthuman’ but ‘com-post’. Acknowledging the extent of the troubles ahead – the human population is set to reach 11 billion people by 2100 – she urges us to ‘make kin, not babies’. Humans and non-humans are profoundly bound up with one another and we must collaborate, as companion species, to somehow save what can be saved, and see where we end up together.

This notion of reciprocity, where human and non-human species maintain mutually beneficial relations, is also explored in the work of Robin Wall Kimmerer PhD, Professor of Environmental Biology and member of Citizen Potawatomi Nation, who has been a main inspiration in Griepink’s current research. Her book Braiding Sweetgrass: Indigenous Wisdom, Scientific Knowledge and the Teachings of Plants resonates with people all over the world, because, as Kimmerer says in an interview, “they’re remembering what it might be like to live somewhere you felt companionship with the living world, not estrangement”.

What matters according to the artist, is the creation of new narratives that shape and develop these more-than-human relations. And it so happens that Griepink has been telling stories ever since they were a child: world-building is (in) their nature. Throughout their youth they roamed the Urkhovense Zeggen, the swampy woodlands near Eindhoven, to feel connected to the environment and construct new worlds. Since 2011, they have been weaving a rich tapestry of performances, rituals, songs, videos and installations informed by land-based belonging and  indigenous cultures, ancient insights, holistic healing, queer ecology and sci-fi narratives. While the ancient sciences of holistic living-with-the-land endured heavy colonial destructions overseas, the homelands where Griepink grew up seemed void of earth-centering wisdom. Open to the knowledge of various peoples alive on the world, the artist came across the legacy of the druids, which became a central motive to approach the re-kindling of our belonging to the land.

Alive in legends rather than in historic continuality, the frail legacy of the druids, who would consult the woodlands for wisdom, mirrors existent Indigenous traditions in which an ear is attuned to the more-than-human for council and understanding. EARTHSHRINE proposes that we turn a listening ear towards the land again. To assist this process, Griepink dresses up their messages in the form of pop-music videoclips, in which they star as a hybrid diva singer priestess, reminiscent of some sci-fi druidess from a green and witty planet. According to the artist, a new intersectional understanding (and apparel) for eco-spirituality is needed so we might be swayed to chime in with chants and gatherings for the Earth again.

For Griepink, the priestesses of the ancient world always have been performance artists braiding movement, song, smell and space into convincing experiences and containers for a shared cultural understanding of the world. The diva certainly trespasses the hemp-fibre and willow-branch vestibules of this contemporary EARTHSHRINE . By now, the character of the Druid has been evolved into a more abstract alienesque lavender and blue nature-being reminiscent of an elf or pixie, as to make the face of soil-centred wisdom even less human.

According to the artist, embodied multi-sensorial stories have carried the narrative of our belonging to community and the earth for eons. Similarly, EARTHSHRINE carries several stories bound in one multi-sensuous spatial installation comprised of several artworks. Little bits of lore and legacy from ancient Europe are braided into a new sacred sci-fi world, a temple for soil that defies placement in linear time, in which each meticulous detail, from the costumes to the rituals to video-sets, scentscapes and sounds, formulates the entire habitat.

One sculpture in the show, entitled Eden Spacecraft (based on a 2009 sketch with the same name) appears to be preparing for departure or has perhaps recently arrived, carrying a cultivated idyllic eco-system. A future Ark, built especially for plants and beauty and perhaps a mysterious eco-goddess space-deity.

In the newly shot video DIRTY, premiering at MU for this exhibition, two alien faeries, faun-like naked and sexy creatures meet around a sacred rock or dolmen in a circle of earth. Unacquainted with soil, the faeries discover its sensuous, sensual qualities in splendid isolation. They sing and dance about a time and space ‘Before Dirt Was Dirty’, when they still prayed to the Soil God. The film exists in a whole new realm of the artist’s imagination where the earth – our greatest teacher – contains wisdom and power that we as alien elves can connect to. 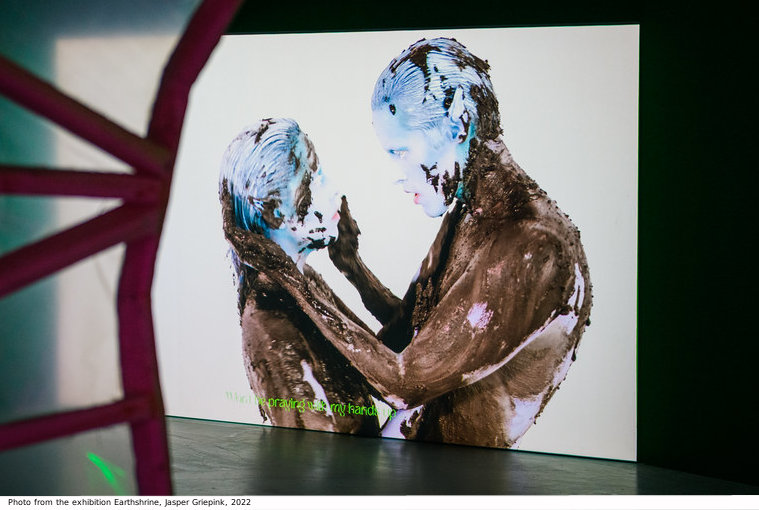 Kimmerer once quoted conservationist Aldo Leopold, who said that “to have an ecological education is to live alone in a world of wounds”. Or, as Haraway puts it: “sometimes scientists and others who think, read, study, agitate, and care know too much, and it is too heavy”. This sentiment is explored in a second video work in the exhibition, EARTH(hurt), showing the same folkloric creature that featured in DIRTY, now covered in wet soil and crumpled into a trembling heap. A haunting soundtrack refers to eco-grief, or despair about the climate crisis. As the creature deeply breathes in and out, it tries to utter “Earth is our biggest teacher”. Although we may not see them, Griepink suggests that invisible beings are also going through a dark period, just like we are. The Earth itself is in pain.

The exhibition does not only refer to the world outside, it also holds an enormous amount of soil and earth inside, ready to be interacted with and explored as the show unfolds. In one of the special weekends, during a rite of gratitude, fungal spores will be inoculated into the soil in a ceremony with eco-warrior, academic-activist, dance artist and writer Victoria McKenzie that will fuse science and the sacred. Fungi, or their hyphae, scientifically speaking, permeate soil and form symbiotic relationships with the plants and trees that root there. In the 2021 bestseller Finding the Mother Tree, Suzanne Simard relates her discovery that it is through networks of hyphae – the mycelium – that trees communicate and share resources with one another. The soil is alive, it is intelligent, evidently. Could it be sacred too?

Soil also appears repeatedly as a material and a theme in the present Venice Biennial. Take for example the garden full of rocks, didges, sugarcane and kudzu, tellingly called To See the Earth Before the End of the World, where artist Precious Okoyomon inextricably ties nature to colonialisation and enslavement. Or Delcy Morelos’ installation Earthly Paradise, a layer of earth over one meter high, that smells of hay and cacao, cinnamon and cassava. The work is inspired by the cosmologies of the Andes and the Amazon, where nature is never inert and humans are earthly creatures: “As the soil penetrates and affects our body and senses, our human becoming takes a new shape”, according to Morelos, “[…] we are always becoming ‘humus’, as the Latin etymology of the very word ‘human’ recalls.”

Earth and soil matter to Griepink in a similar way: they materialise our connection with the environment. The fauns in DIRTY use all their senses to relate to their surroundings – stroking, tasting, licking, smelling, and they end up covered in mud. It might make you think of the incredibly physical clay performances of Alexandra Engelfriet, like Under Ground, the work she made in Tilburg for Lustwarande 2016. This was one year before Griepink installed Grove 2.0 – Chapel of Wild Wisdom, a futuristic greenhouse that was the centre for a gratitude performance for the forest, at Lustwarande 2017. In a video registration, the artist is portrayed touching, caressing, smelling, blessing and kissing trees and plants. Elated, grateful, political eco-sex.

In MU, EARTHSHRINE will form a cosmic nucleus for more mytho-ecological investigation; the creation of new stories, songs, exchange and contemplation. How can we re-enchant the earth, re-spirit the soil, invite the sacred back into the land? There is no ready answer to this question in MU, only an invitation back to the land.