Dixit Algorizmi, an exhibition between art and algorithms

The Centre for Contemporary Art in Tashkent (CCAT), which sits under the Art & Culture Development Foundation of the Ministry of Culture of Uzbekistan, presents its exhibition Dixit Algorizmi, exploring the seminal work of ninth century Uzbek polymath, Muhammad ibn Musa al-Khwārizmī. Curated by Joseph Grima and co-curated by Sheida Ghomashchi and Camilo Oliveira, the exhibition opens October 5, and unpacks the influence of al-Khwārizmī’s work on today’s technological acceleration.

Dixit Algorizmi centers on al-Khwārizmī findings detailed in his book, Kitab al-Jabr wa-al-muqabala; the Latin translation of the book gave rise to the word “algorithm.” According to curator Joseph Grima, “The algorithm shapes all the possible interactions in modern culture through the apps on our smartphones. We know the word, but we don’t understand it. The exhibition retraces its origin and the impact it has had on societies, from ancient to modern times.” Technology we assume to be modern, such as artificial intelligence, rests on the basic principles theorised by al-Khwārizmī. 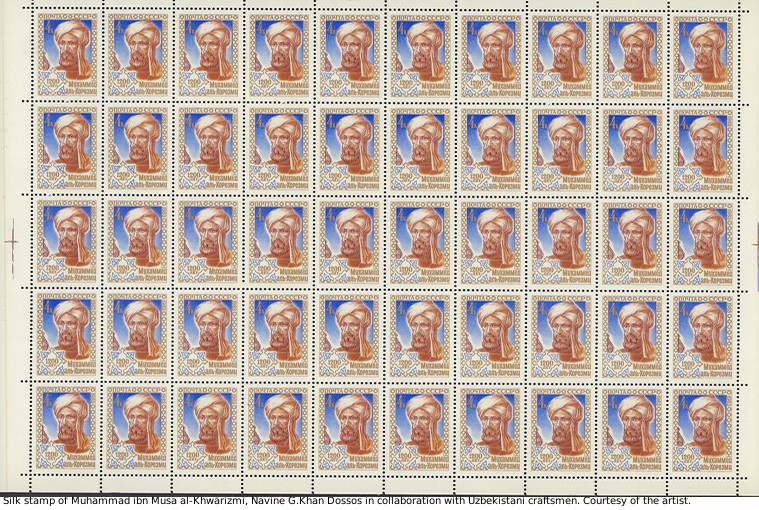 Saida Mirziyoyeva, the Deputy Chairman of the Art and Culture Development Foundation, states: “Al-Khwārizmī left a whole science to the world. In Dixit Algorizmi, we explore how technologies that we consider to be fundamentally new are based on ideas which are distant in time.” Executive director, Gayane Umerova, further comments: “The scholar and his works become the central theme reflecting on cultural and scientific symbiosis, while artists transfer the historical identity of modern technologies to visual perception. Through a multi-faceted collaboration between international and Uzbek artists, Dixit Algorizmi reveals the connection of millennia of history with the world we are seeing today.”

The exhibition pays tribute to the scholar and his story by connecting it to multiple fields. The works by the contributing international conceptual and visual artists are thematically linked to three different themes, each of which provides a fresh perspective on the exhibition’s thesis:

The first theme explores the notion of the portrait and the representation of al-Khwārizmī today, without reliable historical and biographical information. The resulting works are a series of collaborations between international artists and Uzbek craftspeople.

The second theme relates to the ways in which the ideas first articulated by al-Khwārizmī have transformed our ability to interact with each other through technology. Selected artists whose work explores the influence of innovation on modern life present individual works.

The third theme presents redefinitions of our understanding of algorithms. On show are texts and diagrams in the form of posters contributed by international creators whose work investigates the relationship between everyday life and the history of science and technology.

The selected artists, Charli Tapp, Elisa Giardina Papa, James Bridle, Navine G.Khan Dossos, Neil Beloufa, Saodat Ismailova and Space Caviar, have been invited to take their own perspective on the tradition of craft as part of the cultural history of Uzbekistan. “Art, design and technology are intertwined, reinfocing the idea that crafts, like algorithms, are a series of steps that accumulate to form a certain outcome,” states co-curator Camilo Oliveira. Fellow co-curator, Sheida Ghomashchi, quotes “Dixit Algorizmi invites us to uncover a fresh perspective on the source of the technological and philosophical innovations that have led civilization to the point where it is today.”

In tandem with the exhibition, which is installed in the former powerhouse housing the CCAT, there will be a variety of live and digital events, talks with artists and experts, as well as film screenings and discussions that further delve into the exhibition theme. There is also an exhibition catalogue designed by Studio Folder, taking the form of a curiosity box, that includes contributions from an open call to thinkers, artists, philosophers on how they interpret al-Khwārizmī’s influence on modern world.