Artificial intelligence is deeply implicated in contemporary society, as computers extract and analyse data to improve their understanding of patterns, pictures and processes. This technology is often unseen, as the movements of individuals are tracked through phones and cameras to be translated into ever-improving algorithms. Data Streams looks at how artists are engaging with the increasing advancement of data collection and digital surveillance, and how these technologies are silently transforming our surroundings.

The relationship of individuals to online spaces is explored in works including Addie Wagenknecht’s large-scale mural painting, where the defiant phrase “I will not download things that get me in trouble” is repeated across the gallery walls, gradually and subtly changing in the process. Malia Bruker’s film VIR/L portrays the artist Lena NW, a self-described feminist-nihilist who challenges notions of sexuality and morality in her work, while Suzanne Treister’s Post-Surveillance Art digital prints evoke a world where we are constantly uploading our lives, sharing everything, as algorithms flow through our bodies and devices, up to satellites in outer space and back again. Kitso Lynn Lelliot presents a multi-screen installation that evokes the migration and movement of the post-colonial body. Incorporating the tools and resources of the internet age, she extracts online imagery and symbols, mythologies and narratives, to create a fully immersive environment. 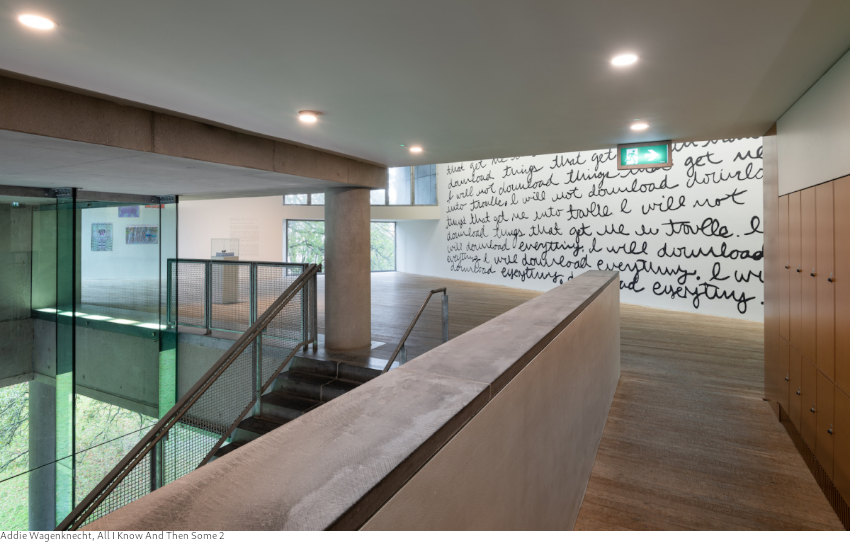 The collection of data for the gradual refinement of algorithms deployed by government and corporate agencies is addressed throughout Data Streams. In Clemens von Wedemeyer’s film Transformation Scenario, real-life protest footage and digital simulations of crowd scenes are juxtaposed to reveal the ways in which mass movements are choreographed and countered by security forces. Esther Hovers’ False Positives series looks at intelligent surveillance systems which detect deviant behaviour within public space, focusing on ‘anomalies’ in body-language. Benjamin Gaulon uses a wireless video receiver to transmit the movements of gallery visitors. These devices, which are popular consumer products, can be used for wireless surveillance cameras, but also by parents to monitor their children.

Data surveillance relies upon tracking the individual traces of internet searches, GPS signals, and bodily movements in a highly networked society. Ed Fornieles’ Associations series employs internet search tools to link together images based on formal and conceptual associations, relating his process to the ‘flow state’ which social media companies employ to make their users pliable to suggestion. Yuri Pattison contracted low-paid workers plying their services on the Amazon Mechanical Turk platform, a “micro-work” marketplace for tasks renumerated with minimal pay. His video compiles smartphone video snippets and photos taken by hired workers of the view from their windows.

Kennedy Browne presents a sound installation of interviews with former content moderators at social network corporations, alongside an extracted image from a 360-degree video on Oculus capturing the Irish Data Commissioners office, and a display of retrieved Facebook data collected from the Austrian activist Max Schrems. Benjamin Gaulon invited members of the public to upload footage to open-source software, ‘glitching’ and anonymising their contributions, while Esther Hovers reproduces and incrementally alters a Google-found portrait of the first man to successfully claim his ‘right to be forgotten’ in the European Court of Justice. Their respective works not only highlight the deeply integrated nature of data collection in contemporary society but also suggest provisional tactics to confront and overcome its presence.