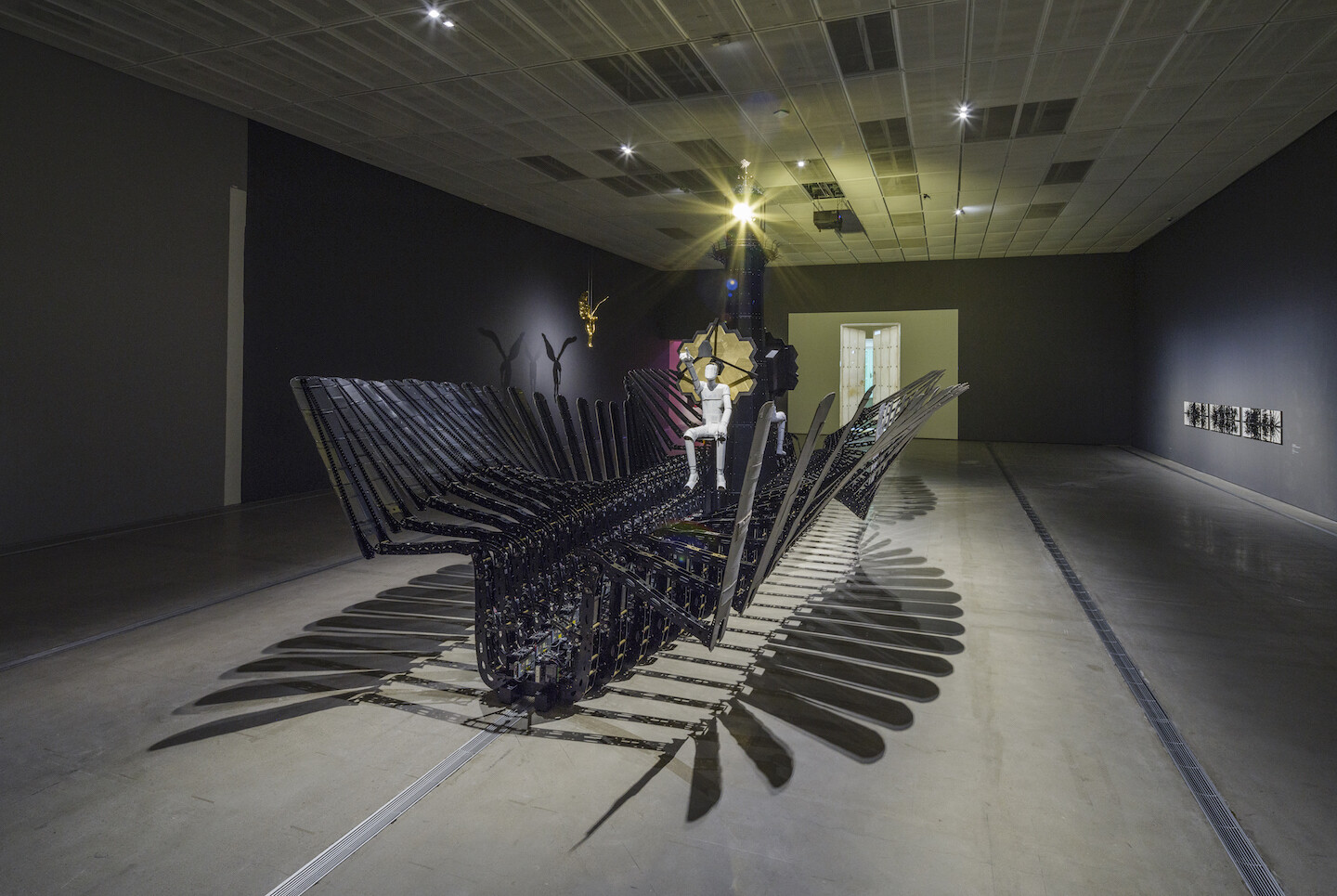 The exhibition Little Ark is designed as a form of a performance that reconstructs the reality that we are in now, bringing the questions inherent in Choe-Uram’s well-known works to the forefront. The situation in which humanity’s survival is threatened by an unprecedented crisis has provided an opportunity to re-examine and question things that have long been taken for granted. The escalation of anxiety and polarization caused by climate change and sociopolitical and economic crises clearly reveals the real portrait of an era of disorientation. In response, the artist constructed the exhibition with the Ark as the main theme and juxtaposed the contradictory desires that constitute the contemporary era, providing a place for the audience to ponder and raise questions about where we are ultimately destined.

The black colored Round Table placed in the center of the Seoul Box is supported by 18 headless figures made from straw, and a round head placed on top of the table rolls around intermittently. This is a comparison to the fierce competition to occupy the single head, and the structure where it is impossible to escape from this struggle even if there is no desire for the head. Hovering above are three Black Birds, constructed of pieces cut from recycled cardboard boxes. They rotate slowly around the high ceiling and watch over the struggle taking place below. Who will get hold of the head? Who will be the loser? Who will be able to escape this strife?

Little Ark is a symbolic ark made of heavy iron and recycled cardboard boxes with cutting-edge technology. Where do we stand in this era where the exploration of outer space is accelerating, while simultaneously aggravating the crisis of the Earth’s ecosystem? 35 pairs of oars stand erected like a wall that alienates us, then begin a majestic dance as if spreading wings. Lighthouse placed on top of the ship, Two Captains and James Webb facing opposite directions, Angel with a feebly slouching body, Anchor that makes it difficult to tell if the ark is docked or sailing, and Infinite Space which is a metaphor to mankind endlessly chasing desires even in a time of crisis; these works all maximize the ambivalent reality alongside Little Ark while drawing our eyes to Exit. This video, in which a door opens but then a closed door repeatedly emerges, is in harmony with the ambient sound that fills the exhibition space, inviting us to delve into our desires, reflect on the present, and raise many questions. What is the purpose of this voyage? Where is the destination? Is there really an exit? Where is the end to this desire?

However, in one corner of the exhibition space, Red repeatedly blooms and withers while emitting fierce red light. If One, a large white flower at the entrance of Gallery 5, is a commemorative wreath made by the artist for the pain of his contemporaries who have experienced the recent pandemic, Red signifies how we must endeavor to move forward nonetheless, as well as the cycle of life itself. In order to truly navigate one’s own voyage, one must constantly question and seek answers in pursuit of invisible fundamental values, rather than following the absolute or the desires of others. As the drawings that are the basis of Choe’s works suggest, important things cannot always be seen by the eye, and the true meaning of existence is not easily revealed. While walking through the brightly lit corridors, the audience will navigate their own individual universes along with URC-1 and URC-2, which were reborn as stars by assembling the headlights and taillights of scrapped cars.