On April 7, 2016, Pirelli HangarBicocca presents Doubt, a solo exhibition by Carsten Höller. The German artist (born in Brussels in 1961, lives in Stockholm and Biriwa, Ghana) has risen to the fore of the international scene for his inquiry into the nature of human experience. Directly engaging the viewer in his art, Höller’s practice revolves around the search for new ways of inhabiting our world.

His work summons different states of mind, among them “doubt,” which opens the door to new ways of perceiving reality. The show, curated by Vicente Todolí, presents a rich selection of works both existent and new, including large-scale installations, videos and photographs, and plays with the spatial and temporal coordinates of the exhibition venue, charting a course between symmetry, duplication and reversal.

The exhibition Doubt divides the Navate space at Pirelli HangarBicocca into two halves, which can be accessed through two different entrances. Visitors have to decide on a color, green or yellow, in order to enter. They will find the artworks aligned along the middle axis of the space. This alignment of works forms a central dividing wall, where visitors will see/experience only half of a given work, and have to remember the half they have seen until they encounter the other half on the other side. 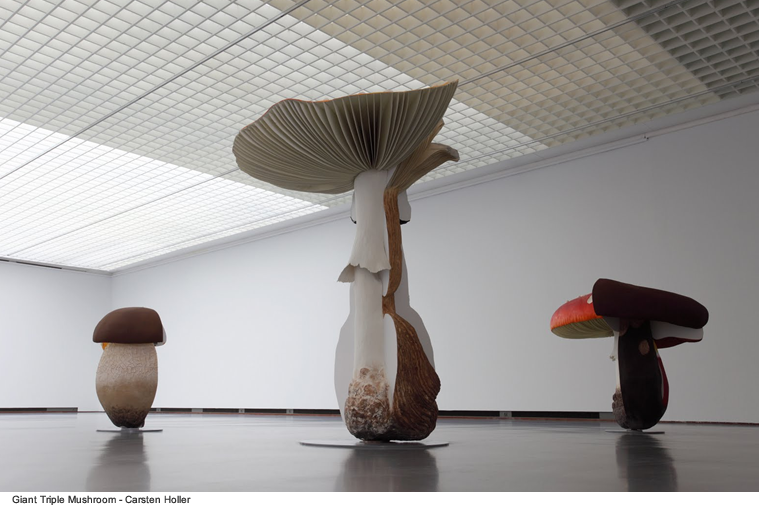 Doubt unfolds along twinned, parallel paths that foreground the potential which lies in the moment of decision-making, demanding sensory participation and perceptual focus on the part of the viewers. It is up to the visitors themselves to choose how to approach the exhibition and which path to take, following both their sensations and the observation of other people as they interact with the works.

The exhibition layout alternates works that draw on optical experiments—like Zöllner Stripes, whose illusory pattern characterizes the central part of the show, and Upside-Down Goggles (1994/2011), in which the artist invites visitors to see the world bottom-up—with others that are as playful in nature, like Flying Mushrooms, a mobile structure that allows viewers to interact with giant toadstools, and Two Flying Machines, in which visitors can experience the sensation of flight. 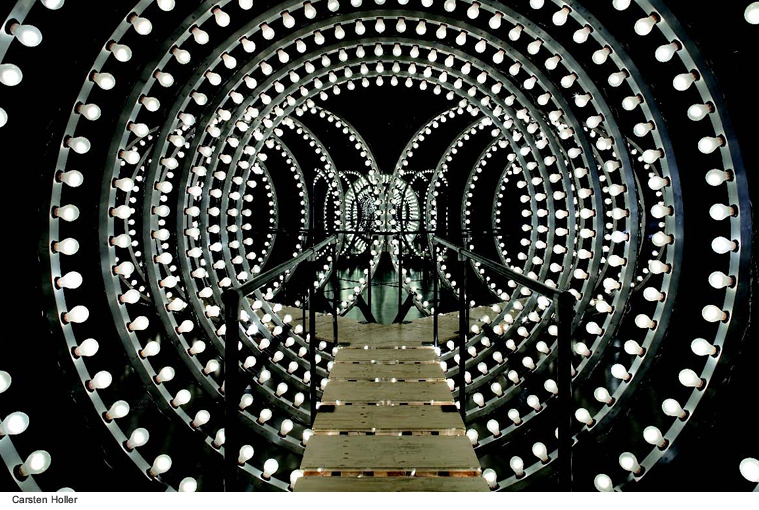 The exhibition also invites us to reconsider the meaning of play and participation through Double Carousel (2011), a merry-go-round for adults that gives a sense of euphoria and amazement, while Two Roaming Beds (Grey), made up of two beds that drift endlessly through the space, suggests a state of meditation.

Yellow/Orange Double Sphere (2016), a hanging light-based work composed of two concentric, flickering colored spheres, one inside the other, corresponds with Marquee (2015), a work by Philippe Parreno from the exhibition Hypothesis, previously on view at Pirelli HangarBicocca until February 14, 2016. This overlap between the two exhibitions suggests an idea of collaboration linked to the practice of both artists, who since the 1990s have explored the concepts of participation and authorship.

A conversation between Carsten Höller and Philippe Parreno
May 26, 2016