Australian artist Cameron Robbins‘ work is an interaction with natural forces and the elements. He creates structural instruments and devices, such as wind- or ocean-powered mechanical systems and site-specific installations that enable collaboration between artist and nature.

This year, presents Field Lines, Robbins’ first international solo exhibition in a major museum, including works created over more than three decades of his practice and seven new installations developed specifically for Mona—many in direct response to the museum’s location. A few of these installations will generate work for the duration of the exhibition, providing visitors with a live artistic response to the world outside the museum’s walls. 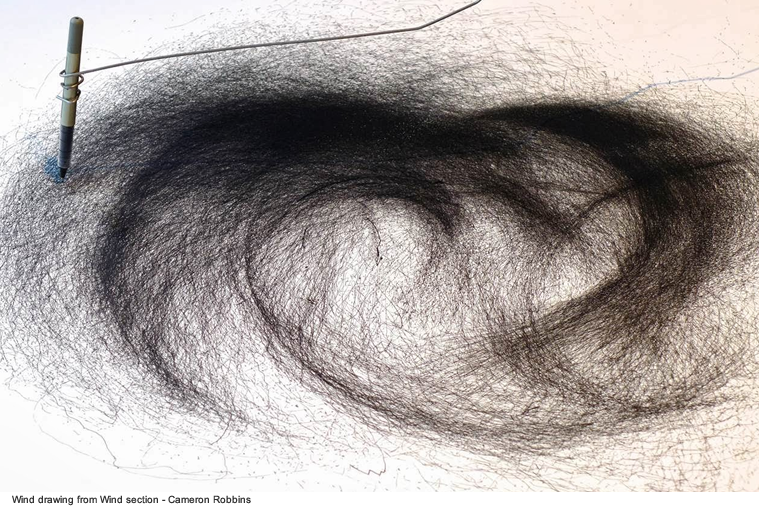 Robbins’ mechanical instruments are up in different locations to collect wind energy, transcribing it as drawings, photographs and sound compositions that take on the forms of time and place; ranging from violent storms to calm stillness, clean laminar winds on a pier to turbulent city windscapes.

This drawing practice has led Robbins to focus on forms generated by natural energy, including the exploration of vortexes, magnetic anomalies in the landscape, tidal movements and astronomical observations.

Robbins was among the first artists to be commissioned by Mona for the inaugural Mona Foma (Mofo) in 2009, for which he installed Southern Marine Music Test Rig (2009). Robbins created another site-specific work for Mona’s exhibition The Red Queen; Wind Section Instrumental (2013), which harnessed wind to create dozens of large-scale drawings between June 2013 and April 2014.

Field Lines will include the impressive collection of 16 drawings up to five metres in length from Wind Section Instrumental (2013), plus installations, photography, sculpture and video, as well as works being created on-site throughout the duration of the exhibition, involving tidal motions from six metres below the museum and the forces of wind from above.

Field Lines opens during Dark Mofo 2016 and is curated by Nicole Durling and Olivier Varenne. The exhibition will be accompanied by a catalogue including an interview with the artist and an essay by Mona curator, Jarrod Rawlins.