Ars Electronica 2021 will take place from September 8-12. For the second time since 1979, it will be a hybrid event that includes exhibitions, concerts, talks, conferences, workshops and guided tours in Linz and 100 other locations around the globe. The opening theme of this journey around the world is the call for a New Digital Deal.

Having arrived in the third decade of the 21st century, that is, at a time when we’ve been promised self-driving cars, flying taxis, global prosperity and much more, when we’ve either wished for them or been afraid of all that, at a time when the discourse about digital transformation is louder but also more confused than ever before, it’s time to rethink the foundations of the digital world – or what we believe the digital world to be.

What began as a “tool technology” has become a central and transformative “cultural technology;” what was developed as a work environment has become a social habitat that is home to well over 4 billion people; and what began as a fun, harmless exchange of daily banalities and cat photos is now a political battleground ….

But how we deal with it, how we prepare for its further impact, how we think about the social, economic, and political framework for it has not changed, and the changes we do see are still too hesitant and too slow. Whether we like it or not, “digital transformation” is not just an appealing rhetorical phrase; it is a matter of defining reality. That the aforementioned deficits are evident and are causing us substantial discomfort is one of the defining experiences of the current pandemic lockdowns.

A New Digital Deal – are we willing and able to act?

New deals are being called for everywhere these days, which speaks to a growing awareness of the inevitability of change. However, it is probably also a sign of our longing for easy solutions, of the ultimately naive hope that a few negotiations and agreements will be enough to put things back in balance.

So what might a new deal look like, and what do we mean by “deal” in this context?

Nothing will come of the new digital deal if we see it only as a quick horse-trading exercise, if we are only out to negotiate a few benefits for ourselves. Nor is it a deal that anyone can negotiate for us, because a crucial aspect of the New Digital Deal is the question of “how are we going to deal with it?” – in other words, the question of options for action and the ability to act.

How can we “fix” the digital world, get a grip on our problems, and at the same time prevent the increasingly obvious advances of powerful political forces?

What skills and expertise would that require? Where and how would we gain those skills and where and how train the necessary experts? What roles will we play in the process?

Deal comes from divide* and A New Deal means redistributing the cards!

Forty-two years after its founding, in the second year of the Covid pandemic, as the digitization of our world has intensified along with the hopes and fears we attach to it, Ars Electronica is also looking to its own roots.

Following last year’s successful model, the Festival for Art, Technology and Society will become a global anchor point. A platform for committed people who see the future, not as a glimpse into the tech companies’ crystal ball, but as the responsibility of our time and have begun accepting this responsibility, as social activation and empowerment, as a source of analytical, corrective and alternative thought and action.

And so, once again, Ars Electronica in Kepler’s Gardens will be a globally networked festival supported jointly by well over a hundred partners. Because just looking over the garden fences is not enough – we network, open and share our gardens as places of ideas, inspirations, thought-provoking impulses and role models. 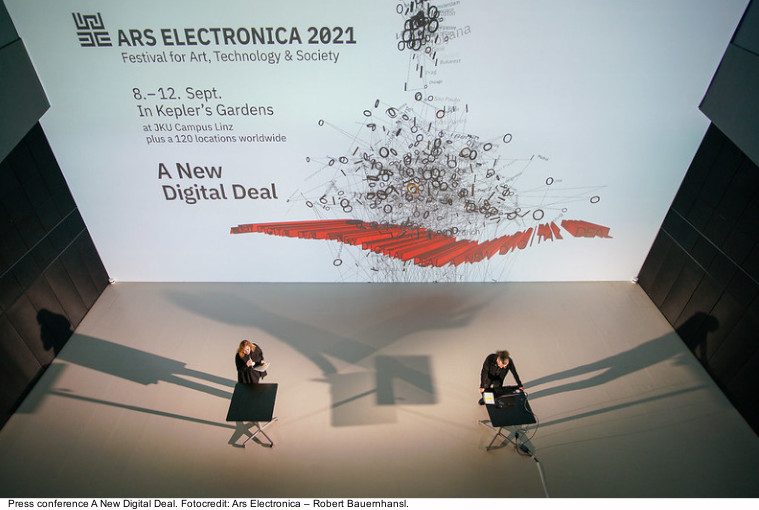 In Year 2 of the pandemic, a festival like Ars Electronica is faced with more than just the issue of its content. As Europe’s largest and most important platform for art, technology and society, it is also reflecting on its own mission and further developing Ars Electronica, which was initiated by Hannes Leopoldseder in 1979, into the role model of an international hybrid festival of the 21st century. “The profound transformation we’re currently undergoing as a society is as exciting as it is challenging for a platform like Ars Electronica,” says Gerfried Stocker, Artistic Director of Ars Electronica. “Who would be better suited to exploring new things at a time like this? Who better to lead the way and get a bit lost in the process, so we can find the best route to our destination? Who better than the Ars Electronica Festival to create an exciting playground for new ideas?”

The central festival hub is still Linz, Austria. That’s where the Festival for Art, Technology and Society was initiated in 1979, and where this festival maintains strong roots after more than four decades. “Partners such as the OÖ Landes-Kultur GmbH, the Linz University of the Arts, the Brucknerhaus and the Bruckner Orchestra Linz work with us on programs such as the CyberArts exhibition, the Festival Campus and the Big Concert Night,” says Managing Director Veronika Liebl, referring to longstanding partners whose perspectives and ideas shape the character of the festival. Johannes Kepler University is a new partner as of last year. “The cooperation with JKU is a milestone, because it not only raises the potential of the festival to the next level, but the interplay of art and science ultimately gives Linz a strategic significance as a university and business location.” The fact that the JKU, with its completely new campus architecture, is also contributing a perfect festival location is the icing on the cake.

As a platform for art, technology and society, Ars Electronica has always understood bridge-building between disciplines and industries not as burden but as a promising and essential task. For some years now, this is precisely what has been increasingly demanded and promoted at the European level. “From the STARTS and the new Bauhaus initiative to the European Media Art Platform, the European ARTificial Intelligence Lab and STUDIOTOPIA residency program to the Erasmus + Knowledge Alliance Steam Inc. or Space EU – Ars Electronica is now involved as a major player in a large number of European initiatives and networks,” says Veronika Liebl. “The festival format provides the perfect platform and stage, the perfect forum and laboratory for presenting and discussing interim results together with our many partners.”

… creates gardens of art, technology and society around the globe, …

The extent of Ars Electronica’s collaborative networks became more visible than ever before during the pandemic. “That worldwide travel restrictions and lockdowns, of all things, would lead to the festival in Linz becoming a festival all over the world seems strange at first,” says Gerfried Stocker. “On closer examination, however, this step was admittedly the only logical one – and actually it was overdue.” So in 2020, Ars Electronica took place for the first time not only in Linz, but at more than 100 locations around the world. Many partner institutions around the globe nurtured their respective “festival gardens” and thus allowed the first world-spanning Ars Electronica to take root and grow. “The incredibly positive response from the community and the public, as well as from our sponsors and the media, has encouraged us to continue on this path,” says Christl Baur, Head of Ars Electronica Festival. “With MIT in Boston, an entire arts and culture network in Barcelona, BOZAR in Brussels, the Onassis Foundation in Greece, the University of Auckland and the University of Wellington in New Zealand, the Chilean Ministry of Foreign Affairs and the Ministry of Culture, etc. – a wide range of partners are already on board again and working with us on the 2021 festival.”

Another central venue of this festival will (again) be the internet. Gone are the days when activities on the net were mainly for promotion – in the future, it will be about the interaction of programs in real and digital space. “How does a hybrid festival of the 21st century function?” is how Christl Baur frames the question of the moment, one that is not only relevant to Ars Electronica. “A mere program overview plus a few LIVE streams is hardly enough – that’s far too little for a really great online experience.” What’s needed are innovative formats and new, accessible forms of interaction. On the one hand, many more people should be able to experience a festival in the future, and on the other hand, they should be able to do so in an entertaining and appealing way. “Not only those of us creating festivals, but all industries across our society have a need for action in this regard,” says Christl Baur. “Because even though we will hopefully soon overcome the current health crisis and various Covid restrictions, that doesn’t change the fact that we are in the middle of an even more threatening climate crisis – and therefore need sustainable solutions.” Innovative use of new technologies will play an important role. “Since last year, we’ve been experimenting a lot with hybrid event formats, virtual and interactive education and interaction tools, and we’ll be pushing those developments further in the context of the hybrid Ars Electronica 2021.” 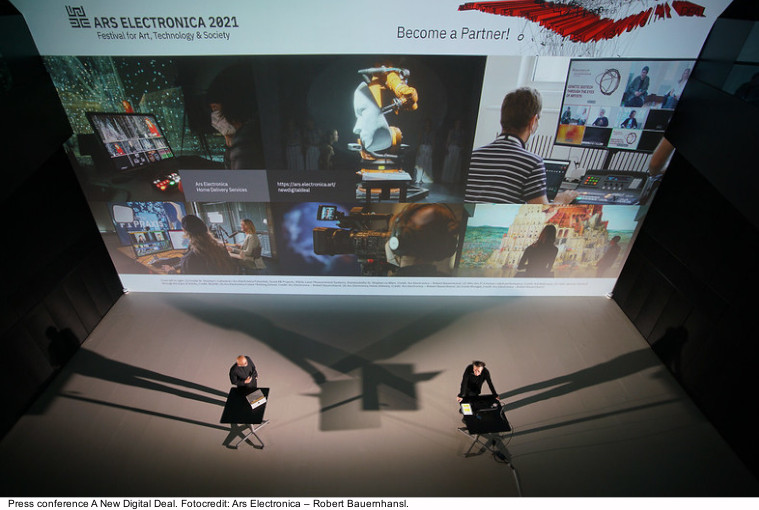 … and open to new partners.

“Is it possible for an institution or company to participate in a hybrid Ars Electronica?” says Martin Honzik, CCO of Ars Electronica, echoing a question that has been trickling in regularly since last September. “The answer is ‘yes,’ but certain requirements must be met in order to do so.” As part of the “Home Delivery SERVICES” initiated just a few weeks ago, there is an opportunity to participate in the Ars Electronica Festival as an institution, museum, university, company or corporation for a fee. “We’re always interested in gaining new partners and customers – regardless of the industry,” says Martin Honzik. “Because it’s clear; we have to make the decisive turns towards an ecologically and socially sustainable future in those fields that are usually not very close to art. The more alliances we can forge with players from mobility, industry, agriculture and other fields, the more exciting and relevant the discourse on the future we’ll be holding on the Ars Electronica platform.”