Among the most discussed and investigated latest trends in contemporary art we need to mention the debate on the relationship between automation and artistic production, with different topics of study that vary from the definition of the meaning of creation of an artwork by a machine, to the contemporary role of computer vision, to the new means of categorization and study of art that artificial intelligence enabled new technologies can offer.

The attention given to this matter is proven by the scientific publications and numerous exhibitions on this theme among which I would like to include Artists and Robots at Grand Palais, Paris (curated by Laurence Bertrand Dorléac and Jérôme Neutres), Art in the Age of the Internet at ICA Boston (organized by Eva Raspini ,curated by chief curator Barbara Lee and assistant curator Jeffree de Bois) and the more recent Training Humans at Fondazione Prada Osservatorio in Milan (created by Kate Crawford e Trevor Paglen).
This subject is also dealt with in an important wat in Venice Art Biennale 2019 May You Live in Interesting Times curated by Ralph Rugoff thanks to, in particular, the works of Hito Steyerl, Jon Rafman, Ian Cheng, Ryoji Ikeda e Sun Yuan e Peng Yu.

Francesco D’Abbraccio is rightfully and remarkably part of this environment and the audiovisual project Lorem reflects a multitude of medial forms that allow a fruition of neural networks and artificial intelligence sysyems where music and image cooperate in a unique way in the making of the final artwork.

The result of the application of these technologies in the production of texts, images and sounds converges in the first work by Lorem called Adversarial Feelings that includes a 24 minutes audiovisual piece, a 9 tracks album and a book.

Francesco D’Abbraccio is an Italian musician, visual artist and independent researcher. He is active in underground music and art scene since 2008 with electronic experimental duo Aucan (more then 400 live gigs across Europe, Africa and Asia) and with the collective Unità di Crisi. Focusing on politics of representation and transmedial culture, he realised projects for a wide variety of institutions. 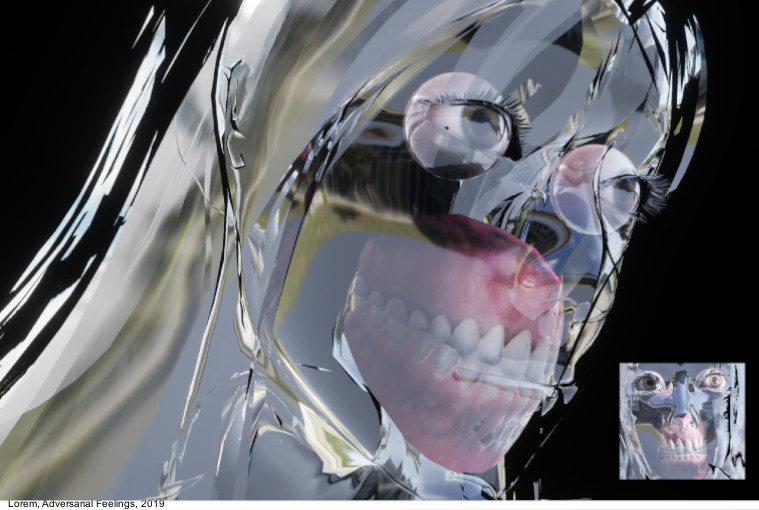 Teresa Ruffino: Your artistic practice develops in a multidisciplinary way in different fields: music, video and research, that appear to me to be connected and included in your works. When was Lorem born and why?

Francesco D’Abbraccio: I’ve always worked with these things, even if in different and delimited circumstances. Lorem originated exactly from the need to find a connection between various tensions and interests that seemed to converge in a common ground. Lorem works in a coherent way on different media because it works with precise limits.. I try to build processes that works similarly for the audios, texts and videos. Confining my action field helps me to have more freedom in what I do.

Teresa Ruffino: Adversarial Feelings is a complex project that is made up by textual, visual and audio elements. It includes a book, a video on USB support and a list of musical tracks. Can you talk about your vision on the intended way of fruition of this particular kind of album?

Francesco D’Abbraccio: It is always easier to build immersive narrations that are able to give out a powerful multisensorial experience, sometimes overwhelming in the way it is imposed to the attention of the spectator. Maybe this is also why today musicians are not only involved with music, but also in the collocation of it in broader environments and devices. Lately I have started to think about the live shows, the albums and the videos as part of experiences to design and not as artifacts to create and build. I like the idea that when a person comes to a Lorem concert is bobarded by a flow of visual, acustic and textual stimuli, and the same thing stands for the album. Difference languages come together to define a singular narration. 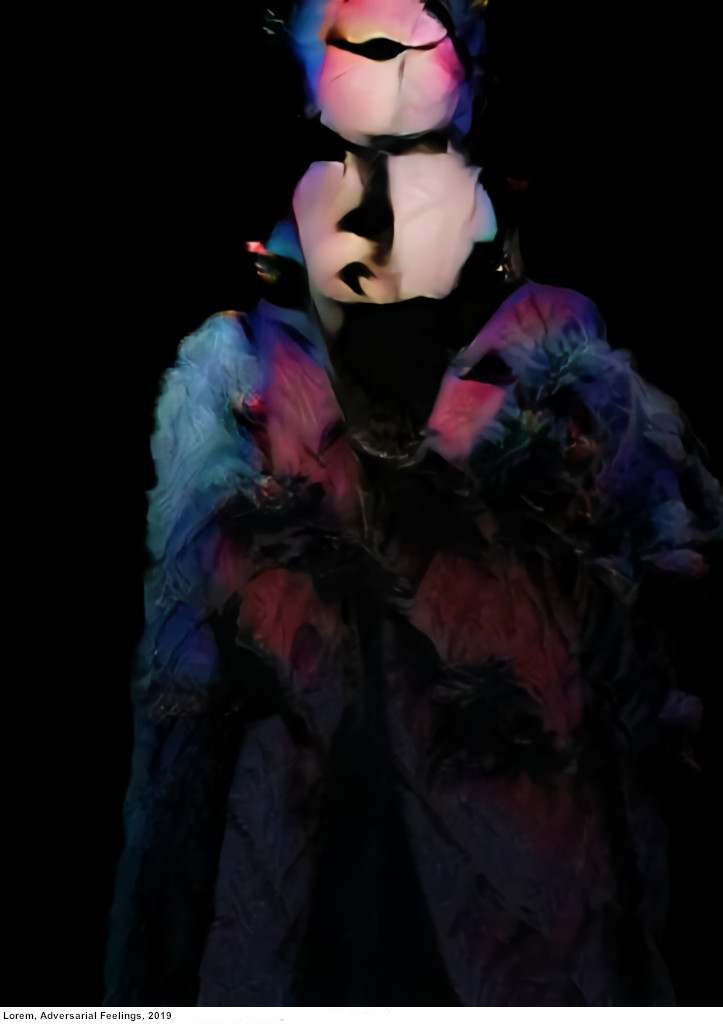 Teresa Ruffino: In the title of the work we find a subject (feelings) that is always associated with the human being, that is the ability of feeling emotions, preceded by an adjective (adversarial) that is connected on the other end to the realm of algorithms, in particular with GANs (General Adversarial Networks). How did you come up with the idea for this project and what was, in your opinion, the outcome of this reflection on the emotional and artistic expression potential of the algorithm?

Francesco D’Abbraccio: The idea was, in fact, to observe irrational human behaviors through the filter of a machine and the way in which it interprets our inputs. I’m interested in how the algorithm can act in an emotional way, by simulating to have its own consciousness and sensitivity. I am also interested in the observation of the most intimate human emotions through the gaze of this non-human intelligence from the outside. Often these emotions are fragmentated and “adversarial” just like those of an AI.

Teresa Ruffino: Can you explain how the different people who took part in this project contributed to its creation?

Francesco D’Abbraccio: It depends. With Nicola (Cattabiani, AI researcher) and Karol (Sudolski, designer and videomaker) the collaborations are ongoing. Karol is a friend that really helped me to define the appearance and esthetics of Lorem. Now we are currently working together again with some parts of a new video. Nicola on the other end is a point person from a technical point of view. Mirek Hardlker created the data set for the third chapter, Luca Pagan was a trusted counsellor for what concerns the device design. With the others the collaboration was limited to some specific video contents… Mario Klingeman made the video sequence for “The sky would clear…”, Damien Henry created a video of the train on “Shonx – Canton”, Yuma Kishi the flower/girl in “Sonnet#008”.

Teresa Ruffino: Some of the most recent works that use neural networks, for example This is the future and Leonardo’s submarine by Hito Steyerl presented in the latest Venice Biennale are focused on the theme of the potential ability to predict the future that algorithms have or, in What the heart wants by Cecile B. Evans we have a technologically advanced setting where the real nature of human condition, which is now in deeper connection with the algorithmic one, is investigated. In Adversarial Feelings is the topic of the future explored?

Francesco D’Abbraccio: I am not sure… From a technical perspective I would say it is, meaning that I often used predictive algorithms to write MIDI, texts and videos. But, in reality, Adversarial Feelings doesn’t talk about the future. It deals with today, with a subject that comes to life, that forms itself and grows starting from a series of information (data) that receives from the outside world and with how, by altering his perception of the world, they take part in defining his emotions and his feelings and, finally, in building the horizon of his subjectivity. In conclusion, it talks about machines and people and it describes how complicated and contradictory their lives are. 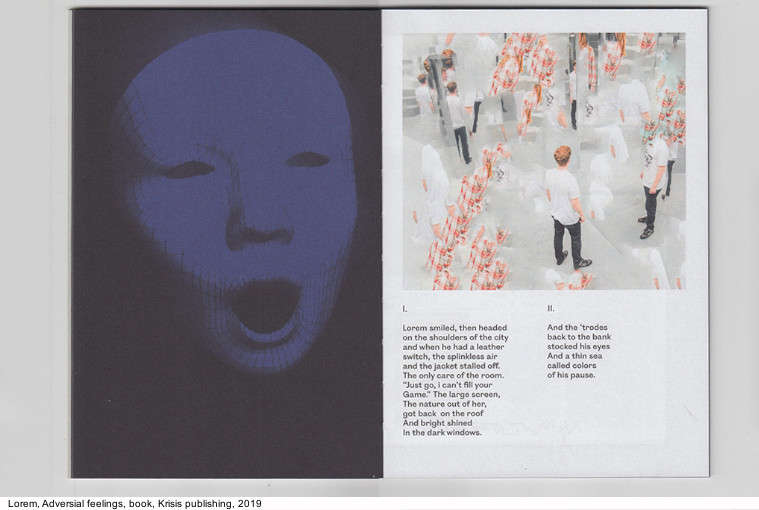 Teresa Ruffino: After the conclusion of this work, are there any issues or ideas that you would now like to explore?

Francesco D’Abbraccio: At the moment I am preparing a new work on Nature. One more time artificial intelligence plays a pivotal role. The starting point is easy: if we accept the idea that Nature doesn’t exist, that it is nothing but a cultural product created with the precise intent to maintain a solid balance and a status quo, then our perspective on things radically changes. The distinction between natural and artificial objects, between human intelligence and artificial intelligence, between original and copy and, at the end, between real and fake starts to waver. And so, it becomes a little bit easier to challenge the whole order of things and to try to play an active role in the fight to establish what is acceptable, what is normal and what is “natural” and right.