The Exoticization and Commodification of the Black Body

From being sold as a commodity to being used to sell commodities, the exploitation of the Black body has been the backbone of the creation of Western civilisation. Although this exploitation is painfully obvious to recognize in some instances – i.e. the Transatlantic slave trade – in other instances it is less obvious and well masked under the pretext of admiration – a sort of perverse admiration I will further develop later on.

For this essay I will discuss two specific instances where this commodification is strikingly noticeable. To accompany my analysis I will refer to three theoretical texts: “Dancing dangerously: colonizing the exotic at the Bal Nègre in the inter-war years” by Brett A. Berliner, Stephen Frosh’s article “Psychoanalysis, colonialism, racism”, as well as “Black Pete, ‘Smug Ignorance,’ and the Value of the Black Body in Postcolonial Netherlands” by Yvon van der Pijl and Karina Goulordava. I will first focus on the bal nègre in 1920s Paris, and later move on to a more pressing contemporary issue, namely Zwarte Piet (BlackPete) in Amsterdam in order to answer the question of how the Black body today remains subjected to the same kind of misappropriation as it was one century ago.

To begin, we need to go back to Paris in the 1920s, the era also referred to as les années folles (the crazy years). The city was rebuilding itself after World War I and so were the people’s spirits. Post-war euphoria ruled the streets of Paris and its music clubs. One of the main sources of entertainment in the city was the bal nègre, an event where people from the Antilles and French Caribbean got together to socialize, sing and dance. The most famous bal nègre was “La Revue Nègre”, which happened in 1925 and consisted of live jazz concerts by Black artists and dance performances by the famous Franco-American entertainer Josephine Baker. 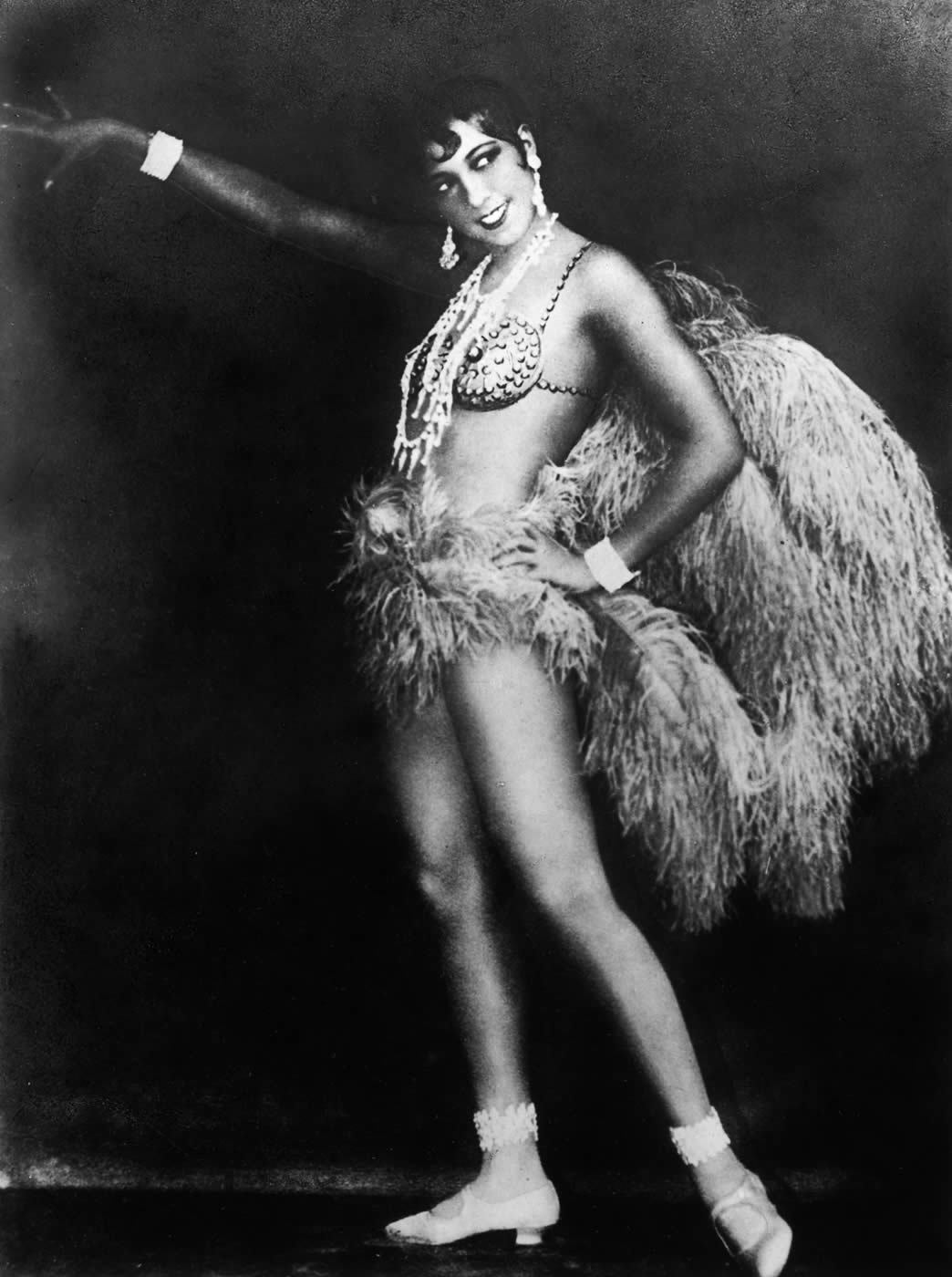 As explained by Brett A. Berliner, as time moved forward, the bal nègre grew in popularity and started to attract a White crowd, more specifically the Parisian artistic elite, which was very much drawn to the exoticism offered by these events. However, although the attraction of a White audience meant that White and Black people had fun together, it wasn’t necessarily a process of inclusion and acceptance of theBlack community into French society. As Berliner states in his text mentioned above, “[on] the dance floor and in their imagination, the French regained a piece of Eden, a lost paradise.

Though their fantasies differed, all participated in the fantasy world at the Bal nègre, but it was merely a fantasy, a nightly carnival of artifice. Relations between the races and classes did not change. Outside of the bal’s walls, the nègre was still only an object for French needs and desires: renewal, escape, and the discovery of one’s vital force, including sexual force, which increasingly defined exoticism in the 1920s (Berliner 64). The duality of this situation is highly problematic: on one hand the White individual is “having a good time” with the Black individual, on the other, this only remains the case inside the ballroom. The Black individual is thus turned into an experience, a thrilling spectacle, something different, used to entertain the White audience. Once again, a space once dominated by the Black community was invaded by the Western man and, to reference Berliner’s ideas, adapted to the White man’s (sexual)fantasy of the forbidden Other, thus making it lose its authenticity and original purpose. The Black performer and the his/her interactions with the White audience became synonymous with a “seductive and dangerous” experience (Berliner 65).

This objectified view of the Black subject is what Stephen Frosh refers to as the “colonial gaze” in his article “Psychoanalysis, colonialism, racism” (Frosh 146). Frosh uses Franz Fanon’s writings in order to apply Jacques Lacan’s“mirror stage” theory to the colonized subject. In short, Lacan’s mirror stage describes the instant where an infant recognizes the reflection in the mirror as himself/herself, and thus acknowledges his/her own subjectivity as part of a broader system of (inter)subjectivities. However, in the context of the colonial gaze, this works differently. In Stephen Frosh’s words, Fanon puts forward that “[the] Black subject is positioned as an object […] and does not appropriate the fantasy of integrated subjectivity. What has happened is that the Black subject has been fixed by an external gaze” (Frosh 147). 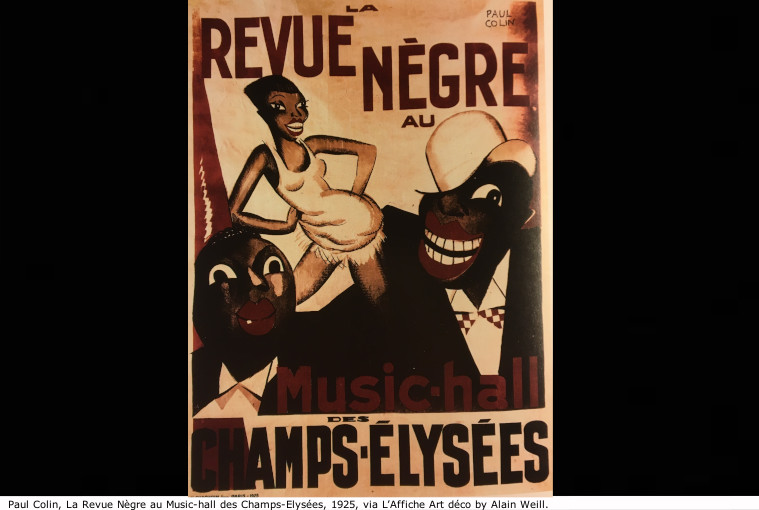 In the case of the bal nègre, the “external gaze” mentioned by Fanon and Frosh, would manifest as the French artist who frequents the bal as a form escapism: a break from his day-to-day reality to live in what, for him, is a fantasy for a night by watching degrading and objectifying performances like for instance, Josephine Baker’s act whereshe danced topless on stage while wearing a skirt made of bananas. Through the gaze of the White audience, the Black subject is turned into a spectacle, an object of perverse admiration; on one hand, the White subject is attracted to theBlack performer because she allows him to turn his exotic sexual fantasies into reality but, on the other hand, this attraction ceases to exist once the sun comes up in the morning.

When discussing the topic of representation, it is important – perhaps even crucial, I would say – to mention stereotypes. Ever since the West started to include the Black subject in the visual arts, the latter’s representation has been very often based on stereotyped ideas stemming from the colonial gaze aforementioned. As an example, I will refer to the1925 poster of the “Revue Nègre” by Paul Colin (see fig.1 below), which will then bring me to the second part of my essay, Zwarte Piet and the current stereotyping and commodification of the Black (colonised) subject. In Colin’s poster, three people are represented (two men and one woman, Josephine Baker), all three are Black and/or mixed race and the way they are drawn is highly problematic and makes one almost cringe when looking at it. I first saw this poster about four years ago in a book about Art-déco posters gifted to me by my high school art history teacher and since then I’ve always found its aesthetic to be problematic.

There is possibly a case to be made on behalf of the artistic freedom of the artist. However, by digging a little bit deeper, one will notice that Paul Colin wasn’t the only one who chose to represent the Black body in such a stereotyped way; the big, bright eyes, the wide smile filled with pearly white teeth and surrounded by plump red lips were the common denominator in many representations of the Black body that originated in the West. It would be naive to assume that this issue is completely outdated and not relevant anymore in our day and age. Just less than one century later and a mere 500km away, although under disguise (literally), these issues continue to spark debate.

The controversy of Zwarte Piet seems to get louder every year that passes, creating a stronger divide within theDutch population: part of it is aware of the problematic and rightfully angry at the way the Black subject is represented, while the other insists on defending Dutch historical and cultural tradition, claiming that Zwarte Piet and the tradition surrounding it are part of Dutch national identity. I won’t focus too much on this national divide, but I do think it isimportant to mention it in order to understand why the issue of Zwarte Piet still holds such a big presence in Dutchsociety today. If one were to look at Colin’s poster mentioned above and a recent (2019) photograph of someone dressed as Zwarte Piet (fig. 2), one would be inclined to believe that the two caricatures were created around the same time given how striking the similarities are. In “Black Pete, ‘Smug Ignorance,’ and the Value of the Black Body in Postcolonial Netherlands”, van der Pijl and Goulordava explain that “[in] order to become Black Pete, the skin must be painted, the lips are covered with lipstick, and an Afro wig completes the physical look” (van der Pijl and Goulordava 285). It is interesting to note that the physical characteristics that make Zwarte Piet recognizable are the same characteristics exaggerated in Paul Colin’s poster and other Western representations of the Black individual. 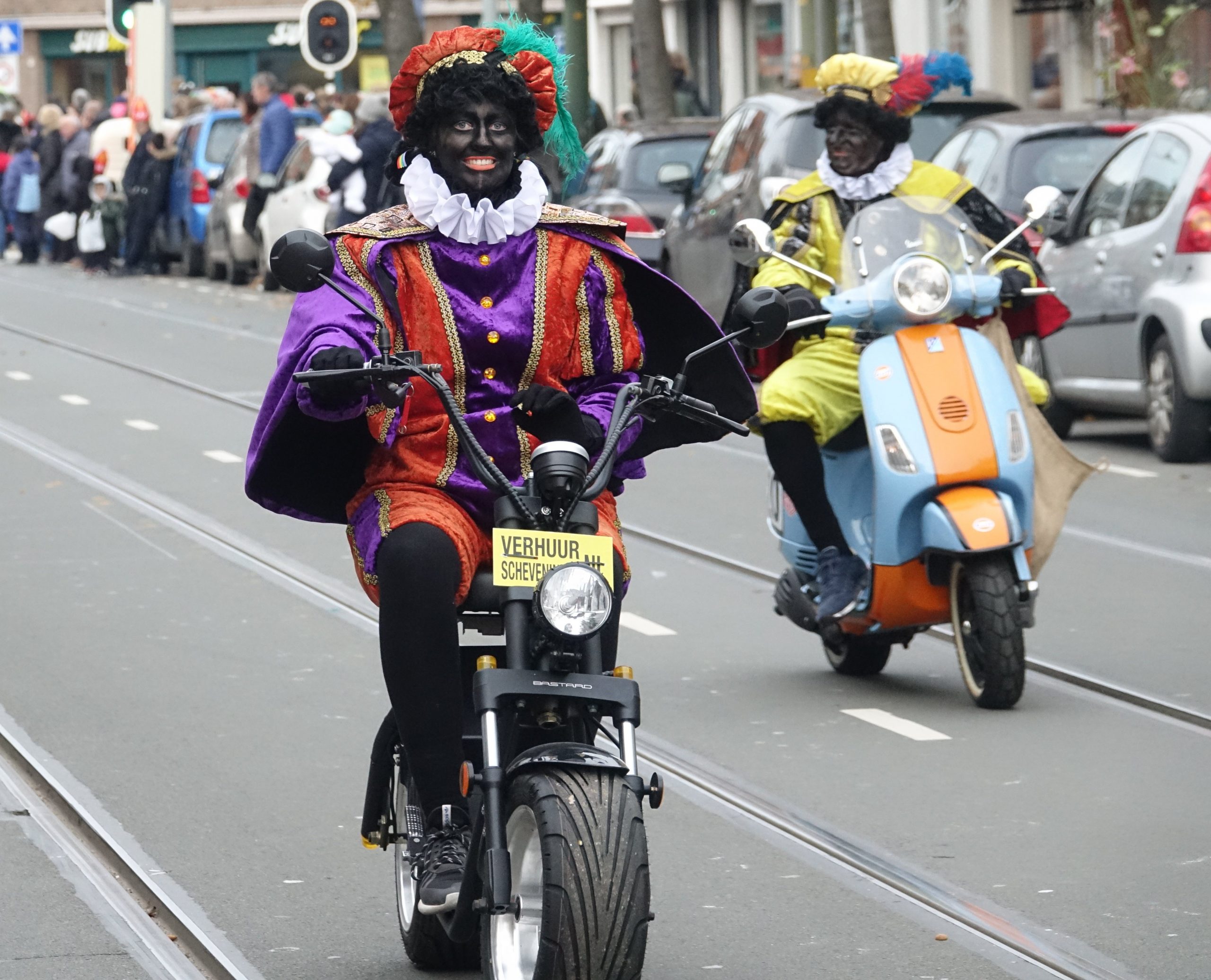 Van der Pijl and Goulordava’s article, although specific to the case of Zwarte Piet in the Netherlands, can easily be applied to the case of the bal nègre that I’ve discussed in the first section of this essay. They argue that besides the commodification of the Black body during the era of slavery, “black bodies were additionally used as a commodity thatresulted in pleasure and entertainment”. They further explain that through this commodification, the black body becomes a means to “spice up” the mainstream lives of the White elite both in a literal sense by way of the importation of spices from the African continent, as well as in a figurative sense, by filling the evenings of the White elite with fantasies of exoticism andsexual adventure (van der Pijl and Goulordava 284). In both cases (the bal nègre and Zwarte Piet), the black body is simplified to a mere stereotype, devoid of any content and autonomy since its existence in these contexts is dictated bythe White spectator. The space he/she is allowed to occupy, his/her role and level of agency is defined through the aforementioned “colonial gaze”.

To conclude, even though some progress has been made in the way the Black subject is represented – by the West and for the West – there is still a long way to go. Zwarte Piet is, in my opinion, the best example of misrepresentation of what it means to “be Black”. It is very interesting that the way the Back individual is stereotyped nowadays, remains very close to how it used to be one hundred years ago. In addition to that, the way Josephine Baker (and other performers from that time) was turned into something to be gazed at, a spectacle as soon as the White audience became involved, is eerily similar to Zwarte Piet: White people “becoming Black” by way of appropriating certain – stereotyped – physical characteristics, specific clothing and by performing a specific role – in the case of Zwarte Piet this is the role of the nationally adored silly helper that kidnaps misbehaving children (so, someone that is at once funny while implying a danger to the Dutch child) –, attracts hundreds, even thousands of spectators every year.

Despite all the change that occurred in the past one hundred years, issues of appropriation, representation and commodification of the Black body are still highly problematic. Yes, slavery was abolished a long time ago and yes, the Netherlands can be seen as a very liberal country, however, Black identity is still being subjected to the White gaze and still being, in a way, dictated by old colonial power dynamics – with instances where the image of Zwarte Piet is used to sell commodities which benefit the Dutch economy.

Lacan, Jacques. “The Mirror Stage as Formative of the Function of the I as Revealed in Psychoanalytic Experience”. The Norton Anthology of Theory and Criticism. Edited by Leitch et al. Norton & Company, 2018, pp. 1111-1117.