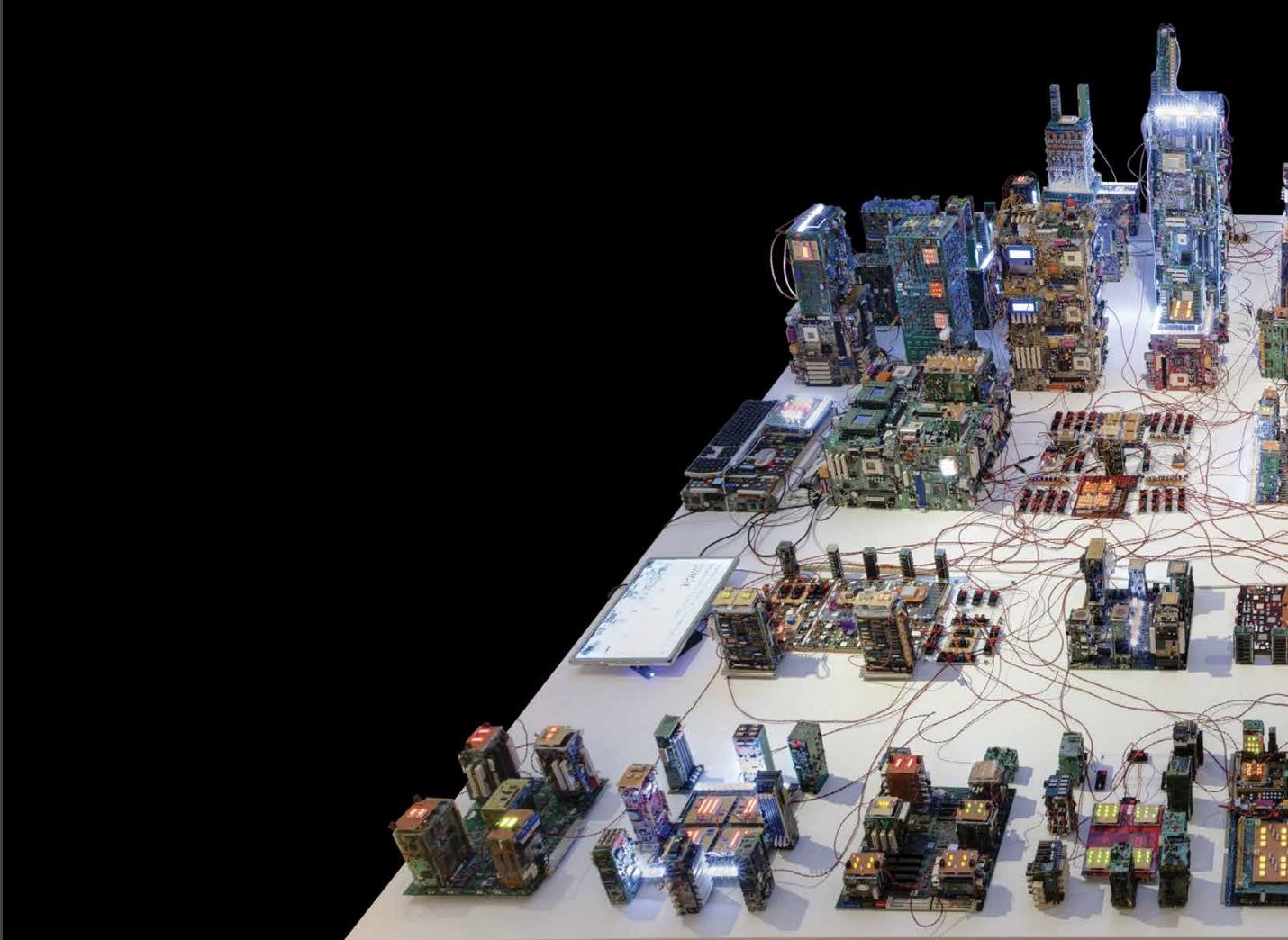 “Phantomology” is a term created by the Polish science fiction writer and philosopher Stanislaw Lem in his essay “Summa Technologiae” of 1964. Partially, just like his previous and best known work “Solaris” (filmed in 1972 by Soviet director Andrej Arsen’evič Tarkovskij), Lem’s most famous philosophic treatise deals with the role of man in relation to a vast and stratified universe, existing beyond physical and sensorial limitations, differently intelligent and able to create or break down barriers of understanding and dialogue between different elements. “Summa Technologiae” is a lucid analysis – unique in the 20th century literature – of the possible ethical, moral and philosophical implications of technological and scientific development. The word “Phantomology” refers to the assumption that human perception is “forced” by its own biology to leave out the utopian idea of ​​omnipotence on the surrounding reality in order to strive with conviction towards a process of mimesis, balance and integration with the natural context in which man is immersed.

A present-day theme linked to the relationship between individual and space that the world of New Media Art can vigorously face thanks to a constant dialogue with technological innovation and to its interpenetration with scientific fields. The elements of “sustainability” and of the relationship “man-environment” become the subject of a reflection on the contemporary that art has a duty to test in its complexity and in the complete meaning of the concept of “environment”, meant as energetic processes, as a natural and technological construct, as an underlying particle archetype that allows the very existence of the world as we know it. Playing with formats and devices, the theoretical and methodological system of the “Phantomology” project is therefore articulated through a multiple proposal, composed of different elements:

– The Technological environment above us, a constant and continuous data flow

– The Sub-Atomic environment under us, what everything is made of

– The Phenomenological environment around us, the invisible in which we are immersed

– The Architectural environment growing around us, its structural and social complexity

These four environments are linked to a historical contextualization of the project through the exhibition of some works by the artist and designer Ugo La Pietra to whom the second text in the catalogue, curated by Ilaria Bignotti, is dedicated. Science, technology, space and history. These are the aspects we have been wondering about and that we propose to the public by using the classical analytical devices of contemporary art, deliberately deconstructed and re-contextualized, namely exhibition, performance and critical comparison that therefore become a single corpus of apparatuses to think about our role as human beings in relation to the micro, macro and phenomenological environment around us.

The era we are experiencing, characterized by a constant and increasingly rapid technological and scientific development, involves on the one hand strong enthusiasm and curiosity towards a future that appears generous in the utopian conception of what we consider progress and wellbeing, and on the other hand a gradual awareness and redefinition of the centrality of our role in relation to the other, to the different, to what exists out of us. In fact, contemporary human beings are dominated by a constant flow of data and information indiscriminately produced by machines, services, artefacts and other living things; a series of ephemeral and invisible “objects” that we partly produce and partly collect, allowing us to build and shape forms of relationships with the world around us.

The Nemesis Machine – From Metropolis to Megalopolis to Ecumenopolis is one of the most iconic works by the British artist STANZA, since the Mid-eighties a pioneer and experimenter of the complex relationship among man, technology and space declined in its different personal, relational and architectural forms. The artwork is a complex and surprising scale representation of a virtual city, whose formal elements are composed of circuits and electronic components, while the lighting is made of LEDs and indicators that monitor in real time information flows, connections and public data networks of the real city around them. A miniaturized synecdoche reproducing the dynamics that characterize, for better or for worse, our daily lives. A transparent membrane that connects CUBO with the city of Bologna, which lives and breathes beyond the large window facing the installation and from which The Nemesis Machine attracts the attention of the visitors, who in turn become part of the artwork as soon as their movements in the exhibition space are monitored and reproduced by a sensor system on a series of small screens. A reminder of Michel Foucault’s statement: “Se forme alors une politique des coercitions qui sont un travail sur le corps, une manipulation calculée de ses éléments, de ses gestes, de ses comportements” [it now takes shape a policy of coercion that is a work on the body, a calculated manipulation of its elements, its gestures, its behaviours]”[1] as well as of the evident privacy implications related to those same surveillance technologies and “intelligent automation” to which we have delegated our anxieties of space “protection” against what is “different” and “unknown”. In fact, as Étienne de La Boétie recalls, “Ce maître n’a pourtant que deux yeux, deux mains, un corps, et rien de plus que n’a le dernier des habitants du nombre infini de nos villes. Ce qu’il a de plus, ce sont les moyens que vous lui fournissez pour vous détruire. D’où tire-t-il tous ces yeux qui vous épient, si ce n’est de vous?”  [This master who so dominates you has only two eyes, two hands, a body, he has nothing more than the less important man of the immense and infinite number of our cities, if not the superiority that you attribute to destroy them. Where have you taken so many eyes, with whom I spy on you, if you do not offer them to you?]”[2]

STANZA’s artistic research focuses on the critical and social analysis of the vital participative systems that characterize contemporary cities, formalizing his work in a series of artworks that, by exploring adjoining disciplinary areas such as Net Art and Interactive Art, aim to trigger dialogues and conversations on urban, technological and social space policies. In his actions and installations, STANZA offers the public the classic archetype of the metropolis as a technological and biological organism, based in both cases on a system of constant and frenetic relationships that make up its lifeblood, thus avoiding the risk of an excessive trivialization or of a distorted reading of his work thanks to the rigorous visual vocabulary and the surprising ability to trigger a dialogue between artwork and public made of curiosity, exploration, reflection, fun and participation.

Always hidden and invisible to our eyes, the sub-atomic environment is the set of microscopic elements that make up the physical world we live in. A complex of rules and behaviours that give form and substance to all we are and to the system of relationships we have created over the centuries with the other species, with the environment and with the mechanical and technological artefacts with which we are gradually saturating the space around us. In recent years, research laboratories scattered all over the world as well as centres for processing and analysing data related to sub-cellular phenomena and structures have activated an increasing number of collaborations with artists and cultural institutions. The more or less declared aim is activating an interdisciplinary dialogue to inform a broad public about the scientific research at the root of our essence of human beings and of the role we play in a broader context that goes beyond the perceived boundaries of space, time and energy. What is the responsibility of human beings towards the macroscopic environment around them as well as towards the microscopic environment within them? Why there is a need to undertake a process of knowledge of the nature constituting the “elements” without which there would be nothing of what we are? A series of multi-dimensional interactions occur beyond our possibility of observation and perception and oblige science worlds to dialogue ever more closely with art worlds in order to explore the bases of knowledge thanks to an extension of senses.

Evelina Domnitch and Dmitry Gelfand are two artists of Soviet origins who create audiovisual sensory universes that combine sound, physics, chemistry and computer science with philosophical practice within that expressive and research sphere known as “art-science”. In order to work on specific scientific processes, the artists collaborate with various research institutes – including the Drittes Physikalisches Institut (Göttingen University, Germany), the Institute of Advanced Sciences and Technologies (Japan), the Ricso Lab (Russia) and the Meurice Institute (Belgium) – and having completely abandoned the use of digital media as well as sound and image recording and manipulation, they develop performances and installations that act as ecosystems whose perceptual phenomena, in constant transformation, offer different points of observation on the energetic processes constituting our phenomenological reality. Force Field is the immersive audio-video live that Domnitch and Gelfand present as an absolute Italian première inside the Unipol Auditorium of Bologna, an ideal place to fully enjoy the contamination between sound and image at the intersection of art and music, performance and science phenomenology. Since the Seventies and the Eighties, the acoustic levitation techniques on which Force Field is based have been used by large research centres such as NASA and ESA to trap and then explore uncontrollable molecular elements in microgravity conditions. In the last twenty years, the same methodologies have also been used in very different fields of scientific research such as fluid dynamics, analytical chemistry, atmospheric sciences, molecular biology and astrophysics. In Force Field, drops of water levitate by means of a series of sound frequencies that allow the constituent molecules to resonate, vaporize and change the shape of their conglomerates by reassembling in a series of spheroid, toroids and polygons in constant oscillation and rotation. The performance describes the elusive physicality of water as well as the relationship and behavioural dynamics of its beautiful sub-atomic “bodies”, leaving us spectators – who are made of that matter – with the awareness of a world hidden from our eyes but oh so vital and beautiful.

The environment that surrounds us and in which we are immersed is innervated by complex physical, chemical, optical and electromagnetic phenomena that determine its shapes, colours, sounds and structures as we perceive them. For centuries, artists coming from very different fields, from visual arts to music and architecture, have been interested in a possible dialogue between human beings and surrounding space that suggests overcoming the idea of ​​art as a representation in favour of a multi-sensorial experience capable of unveiling the invisible level superimposed on the real. Thanks to the progress made by technology and science in recent years, art and contemporary design operate according to this tradition not (and not only) to create objects of aesthetic seduction but a series of experiences that invite human beings to go beyond the limits of ordinary perception and to explore new territories beyond the known reality, to increase one’s awareness and sensitivity towards the other around oneself. A myriad of vibrant phenomena, usually beyond the reach of the observer, become tangible through creative processes, exhibition solutions and performative acts that require a constant redefinition of methods and procedures. These, in turn, define the boundaries of a research starting from experiences historicized since the beginning of the 20th century, first in the philosophical and then in the artistic field, for a different relational mode between human beings and surrounding reality perceived in the force and in the beauty of its wholeness. In recent years, this has led on the one hand to a renewed awareness of the natural universe with which human beings are forced to confront themselves for their own survival, and on the other hand to explore expanded, virtual, augmented, technological worlds that have imposed new models of understanding of the concept of reality and dialogue with the perceived phenomenon.