In her first solo exhibition with Site:Brooklyn, artist Yuge Zhou repositions her intricate body of work with a series of video installations collaged from everyday observations that explore the confluence of individual needs and mass behavior. For Zhou, fragmentation and dissonance are plots in which patterns and repetition naturally form and reform in unexpected, profound ways.

Chorus of Idle Footsteps, in the spirit of her overall practice, rearranges selections from past series into a new collection. The title, taken from French scholar Michel de Certeau’s “The Practice of Everyday Life”, examines the ways in which we engage with mass culture as individuals. With her signature collaging and cubist strategies, Zhou fragments our documented realities in order to create new, visionary perspectives on cacophony, harmony, and joy.

Zhou’s work asks us to re-examine our notions of individuality as she watches us unconsciously coalesce within urban environments. Zhou also makes us reconsider how the moving image can be experienced by projecting her work onto wall-mounted reliefs and collaging her footage in unprecedented ways. 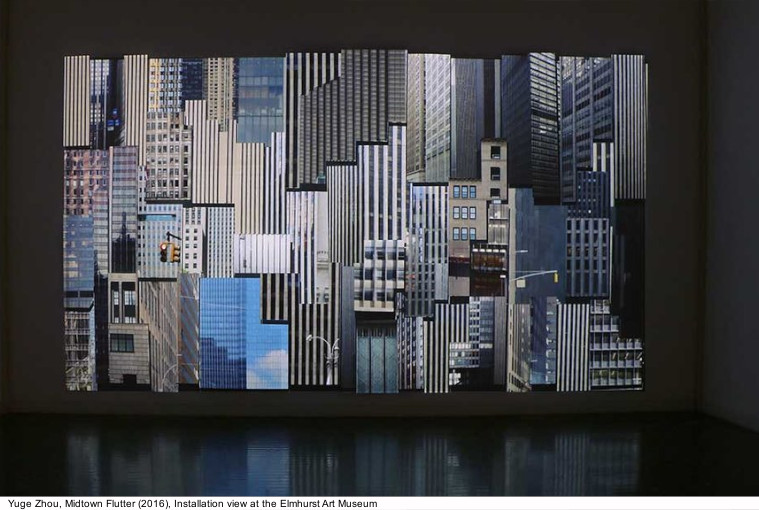 Included in the Series there is Midtown Flutter, which is composed of footage of architectural patterns in midtown Manhattan, sporadically interrupted by pedestrians’ footsteps. To afar the water flows reconstructs Chicago into a towering utopia, emphasizing a genuine yet unrealized harmony between man-made structures and their natural surroundings.

Both works are projection-mapped onto wall-mounted relief panels, producing gradual shifts in appearance and depth, moving from flat images to three-dimensional geometric shapes. Underground Circuit is a collage of hundreds of video clips shot in New York City’s subway stations. The commuters’ movements are cyclical, suggesting a performative quality, an urban theatricality, which, despite its seemingly geometric choreography, remains organic. It is an environment where anonymity and irreducible complexity form a rich social texture.

Green Play is a joyful orchestration on a single summer Sunday of one of the great utopian playgrounds in New York City: Central Park. Pale Patrol aims for an ambiguous, even mysterious effect, a frozen stage with potential conflict and no resolution, only symbolic gestures and social encounters. Both are part of The Humors series, inspired by the ancient Greek philosophy of the four temperaments or “humors” in which human personalities are pre-defined and capable of overlap.

At the age of five, Yuge Zhou 周雨歌 became a household name in China as the singer for Little Dragon Boy小龙人, one of the most popular children’s series in Chinese TV history. Yuge studied drawing under Chinese contemporary painter Kaixi Cui 崔开玺 and eventually moved into Video Art after earning her Master of Fine Art from the School of the Art Institute of Chicago. 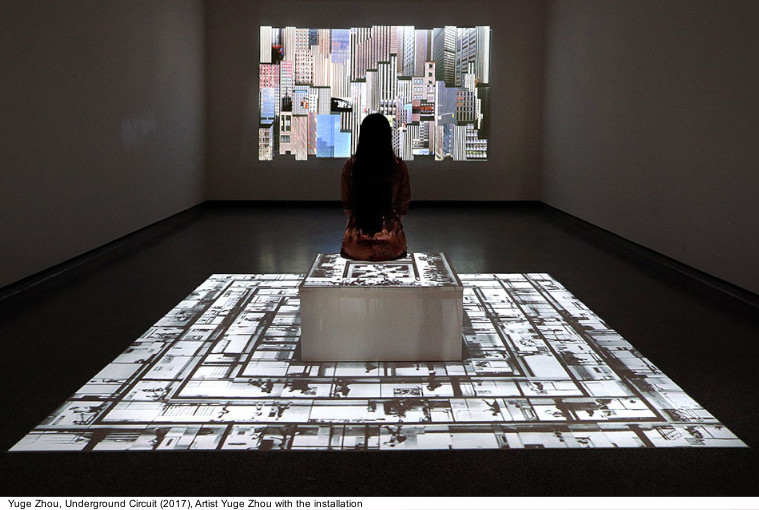 Yuge currently lives and practices in Chicago, IL, creating video collages and sculptural video installations that portray “urban dispositions” and explore the complex interactions between humans and their environment. She also directs and curates the 3300-square foot 150 Media Stream, the largest new media and video art installation in Chicago.

In addition to her MFA, Yuge holds a master degree in Computer Engineering from Syracuse University. Zhou has exhibited her work nationally and internationally including Chicago Cultural Center, SIGGRAPH Asia in Kobe, Japan, Chicago Design Museum, Athens Institute for Contemporary Art (GA), Microscope Gallery in Brooklyn NY and ISEA 2016 in Hong Kong among many others. She received the 2017 Santo Foundation Individual Artist Award.