While the corona virus is creating a new reality around us, MU has found a way to virtually lead you into an array of alternative worlds. Especially now, imaginary worlds can be a relief. But the queer, utopian, dystopian, germinating, irreconcilable worlds that discloses as Worlding Worlds from 22 April to 12 June at MU, offer more than just distraction.

In a choir of critical and upbeat voices, thirteen artists and designers question dominant views, opposing them with unexpected possibilities and creating the space that can be hard to find in society as we know it. Admittedly, the use of ‘to world’ as a verb – I world, you world, we world – is an elusive phenomenon. Common sense soon makes you wonder what is being worlded in the first place, and by whom? When the word ‘worlding’ was introduced in twentieth-century philosophy, it was meant to describe the world’s meaningful unfolding in time. That might sound rather dense, but thanks to the rise of self-learning algorithms and artificial intelligence, it has become easier to imagine a world that is in a constant state of unfolding. 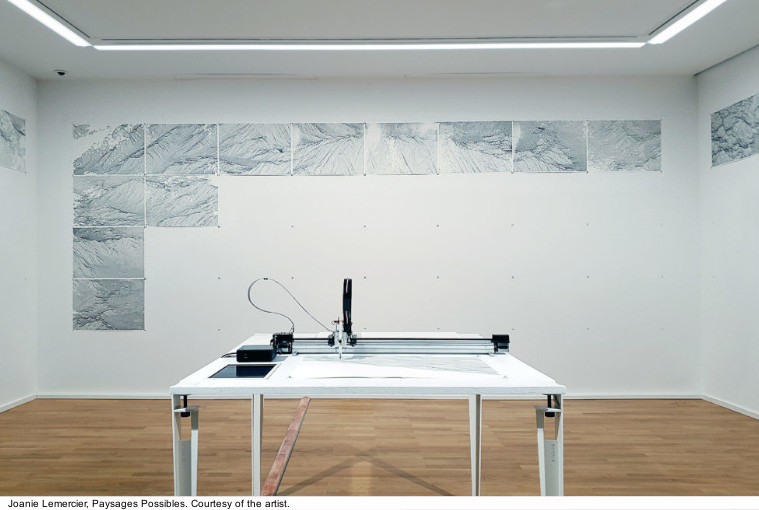 Few artists place worlding at the heart of their practice like Ian Cheng. He is constantly looking for ways to create worlds that continue to thrive on their own, once their designer has withdrawn. In The Emissary’s Guide to Worlding, that can be downloaded for free during the exhibition, he concludes that a world will exist as long as there are people invested in it. We need to be involved, amused, thrilled, amazed or mesmerized. And worlding can take many shapes.

In Paysages Possibles of Joanie Lemercier for instance, a simple drawing device is being directed by a tiny computer and an algorithm. Line by line, a landscape is taking shape, sheet by sheet, until the wall is filled with a graphic world of mountains and water. Meanwhile, life takes centre stage in Eye of the Dream by David OReilly, developing in all its complexity from the Big Bang all the way to our modern age like a breath-taking dance, over and over, and never the same. 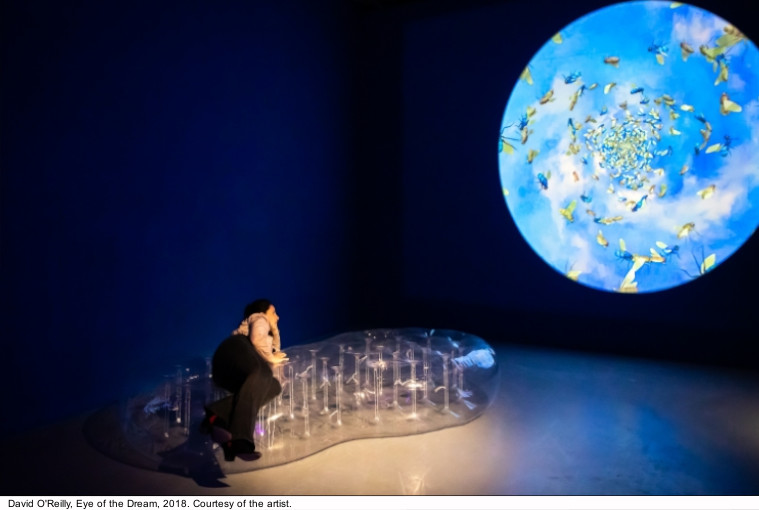 Viviane Komati’s animation Valentine in Things City takes this cycle to a logical conclusion in an immense storage facility populated by drones, conveyers, lifts, logistic robots and packages – a staggering choreography that excludes all human life until a girl arrives, looking for a lost delivery. More dystopian is Flesh Nest, a series of animations made by Andrew Thomas Huang that evokes a post-apocalyptic nightmare of a digital purgatory, inspired by paintings of Hieronymus Bosch and Pieter Bruegel.

Creating a world is a powerful gesture. Ask the LGBTQ+ community, or anyone who doesn’t meet the norms handed down to us through the ages by various religions. The stringent duality ordained by Genesis 1:27-28 for example, that determines people as either male or female (on a mission to multiply) will only ever be abolished if it is challenged by different, new stories. Even though there is a growing attention to gender non-conforming experiences in the humanities and popular culture, we are still a long way removed from creating a convincing alternative world. 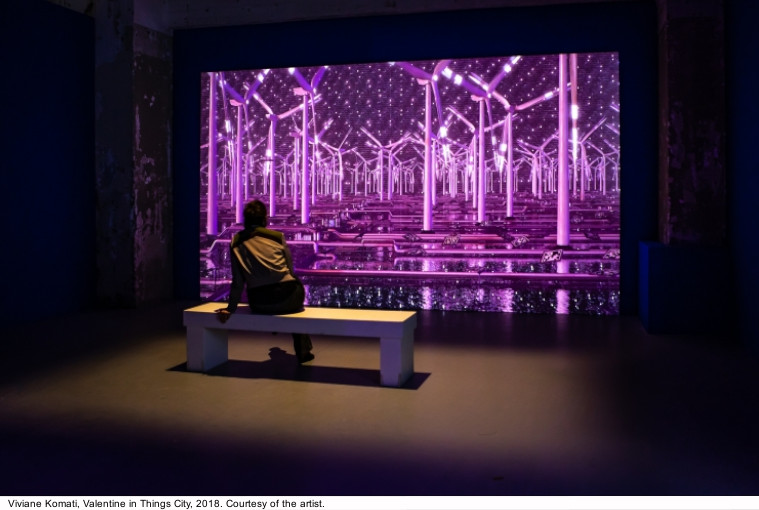 There are precedents, like the planet Winter in The Left Hand of Darkness by Ursula Le Guin, from 1969, where sexless people may choose to be male or female in their fertile periods. Despite growing challenges, however, the binary image of mankind is very slow to dissolve. How problematic this is, and how threatening, becomes tangible in “Ressurection Land” Pro League by Danielle Brathwaite-Shirley (@ladydangfua), where a team of black transgenders needs to protect their resurrected ancestors from trans tourism by ‘the consumers’. Time and again, your motives as a viewer are being questioned. What are you doing in this ‘pro black, pro trans’ space?

Many of our inherited power systems (patriarchy, capitalism, colonialism, etc.) see humans as rulers over the earth and everything that lives in it; an anthropocentric view of the world that urgently needs to be overturned. In Staying with the Trouble, from 2016, Donna Haraway describes worlding as a concern of all critters, large and small. This awareness that we are all connected in myriad ways, that we make the world and give it meaning in mutual dependence, can also be found in Host, an installation by Amanda Baum & Rose Leahy. In collaboration with Richard Beckett they created pillows, wall objects and glass spheres full of bacteria and microbes, purposely bringing us in close, intimate contact with the micro-organisms we already carry in and on our bodies anyway. 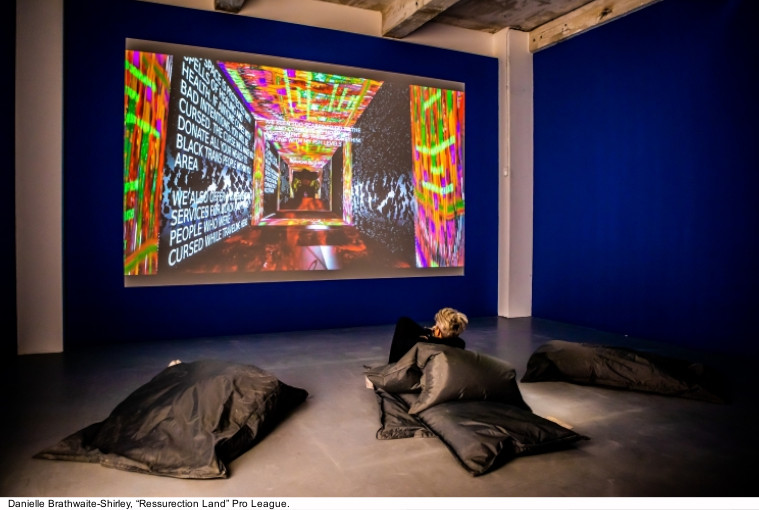 Liam Young comes up with a completely different proposal. In his Planet City all people on Earth retreat to one giant city of 7 billion inhabitants, so that the rest of the planet can be returned to nature. Is this a sustainable way of living? What would a world look like that is not designed according to dystopian western scenarios? In a different way, these themes also appear in Kordea Jatafa Henry’s Earth Mother, Sky Father. Street dancer Storyboard P pacifies a techno-demon in 2030 Africa, when the continent is no longer exploited by China or the West, but uses its rare earth minerals for its own growth and development instead.

On a smaller scale, growth is central to Weightless Collaboration by Soft Bodies, a virtual garden where you can collaborate with someone else to work the soil, water the plants and enjoy the fruits of your labour. The experience of a shared virtual reality anticipates new ways of living and working together for people who are separated by physical distance. Stream City of Design Academy alumnus Stéphane LAB imagines our future habitat in a virtual urban landscape, allowing you to fly through the sky in a wingsuit. Ephemeral, anarchistic, almost transparent, it values experience and collaboration with others over individual possessions. 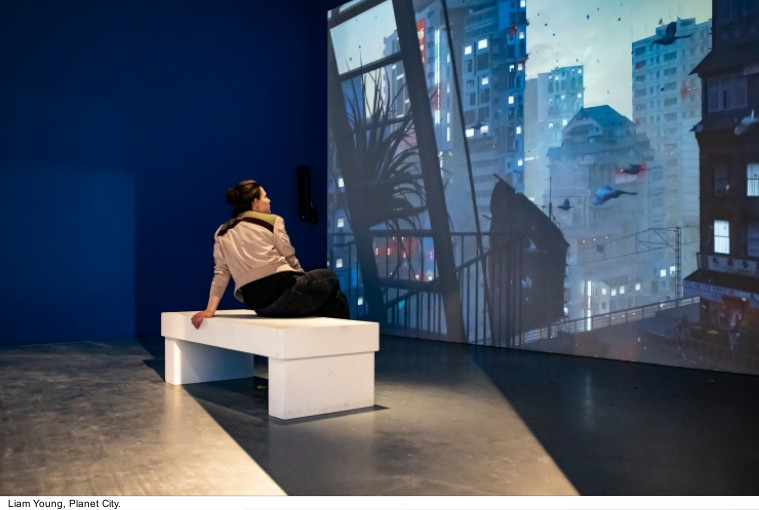 Still, world building is not only about construction. Worlding, as a continuous unfolding of the world, also holds an element of destruction. You can sense this clearly in two of the most personal works in Worlding Worlds. Ferenj, The Installation by Ainslee Alem Robson, exists of point clouds based on crowd-sourced images of Addis Ababa and the Cleveland restaurant of Robson’s parents. As you move around in a virtual space, you see a world continuously appear and disappear like intangible recollections. The installation Flotsam Jetsam, Lagan and Derelict made by Iranian-born Mehraneh Atashi, is built of memories, stories, found objects and animations. She sees the work as a non-ending state of becoming: “a landscape of disruption, that carries the potential of transformation in it.”