Trisha Baga’s solo exhibition “the eye, the eye and the ear”

Pirelli Hangar Bicocca presents Trisha Baga’s solo exhibition the eye, the eye and the ear, comprising five video installations together with ceramic sculptures and a series of paintings, which form a multitude of unusual and thought-provoking narratives: from science-fiction and the popstar Madonna to ancient myths and digital devices such as Alexa Echo.

Trisha Baga combines different languages and various media including 3D technology, drawing from television and film imagery along with more personal recordings. She grapples with such themes as gender identity, relations between the real and the digital world as well as the impact of technology, in order to disclose a different perspective of our contemporary imagination. 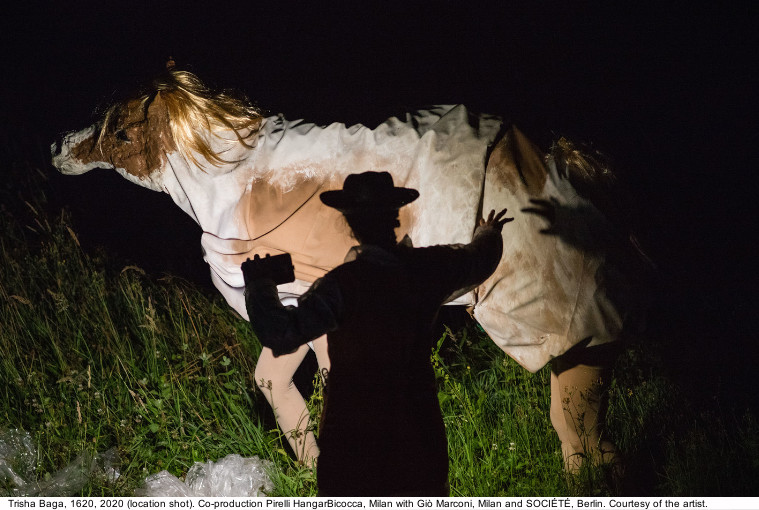 the eye, the eye and the ear, curated by Lucia Aspesi and Fiammetta Griccioli, is the first institutional show of the artist in Italy. The exhibition brings together five video installations investigating the co-dependent evolution of the body with constantly updating image technology. It covers fifteen years of production, from her first piece There is no “I” in Trisha (2005-2007/2020), conceived as a TV sitcom that questions the gender stereotypes of all the various characters whose roles Trisha Baga plays; to the more recent work 1620 (2020) produced specifically for this show.

The latter is a video installation inspired by the legendary object known as Plymouth Rock, which symbolically marks the origins of the United States of America. According to the artist, «1620 is an impressionistic work of science fiction, which reframes Plymouth Rock as a source of “narrative stem cells” in the hands of genetic scientists studying deep-seated flaws in The American Drama».

Together with these works, the exhibition space hosts two other installations that have played a determining role in defining the artist’s oeuvre. Madonna y El Niño (2010) introduces Baga’s fascination for natural phenomena and pop culture, comparing the linguistic evolution of Madonna’s cultural output to the water cycle; while in Mollusca & The Pelvic Floor (2018) the artist adopts a visual language close to Hollywood in which the dense plot continually shifts between the real and the virtual, the haptic and the optical. 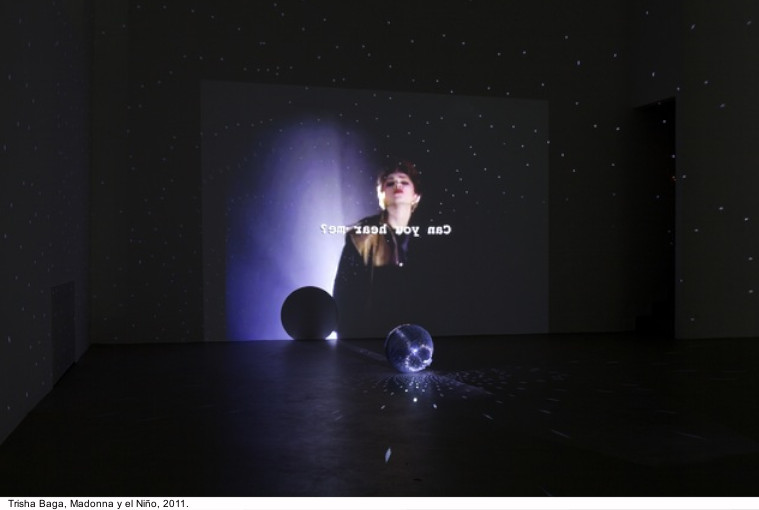 Like a mise en abyme, the exhibition meanders through the various media which have characterized Baga’s career – ranging from VHS cassettes and DVDs to 3D devices – and is deeply rooted in her performative practice. Furthermore, the artist presents a rich selection of ceramic works produced since 2015, situated at the entrance of the exhibition. Trisha Baga has defined it as “the geological corridor of evolution” of the man-made artefacts of civilization—including Sphinx-like poodles with flaming heads, popular cultural figures, that double as vessels for virtual assistants (such as the drag queen and television celebrity RuPaul), real and hypothetical electronic devices (vintage telephones, projectors, slides, microscopes). Alongside she presents six pieces from the series Seed Paintings (2017), composed of sesame seeds and foam mounted on wooden panels of varying sizes. 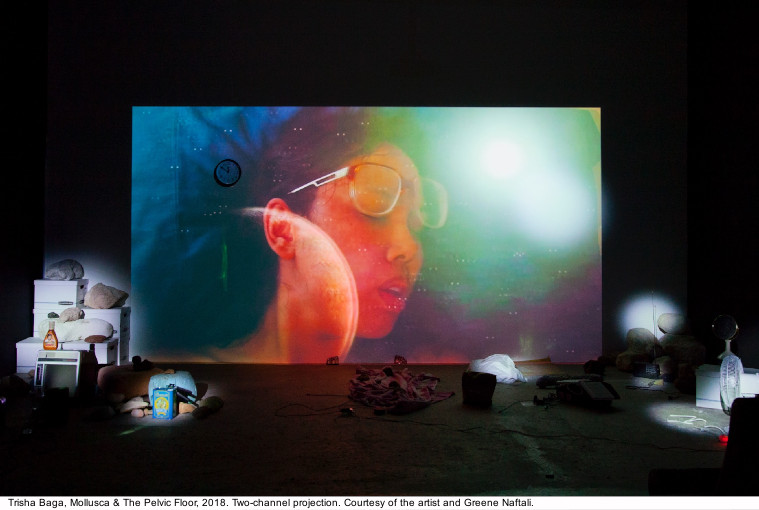 The show’s display hints at the aesthetics commonly found in natural history museums, not only in its style of presentation, but also by using an unusual classification system that intertwines the idea of the fossil with high-tech devices such as today’s virtual personal assistants, thus creating a sort of temporal short-circuit. Through her ironic and witty perspective Baga focuses on the excessive reliance and hopes we put on technology, staging in her work its most fragile and failing aspects. The show’s title the eye, the eye and the ear, individualizes and fragments the bodily senses that are active while experiencing the exhibition, in which the visual effects replicate and dialogue with the sounds in such a way that the narrative becomes a living organism.