“Transcorporealities”: part of “HERE AND NOW” at Museum Ludwig

The exhibition Transcorporealities takes as its starting point the concept of the permeability of bodies. Posthumanist theories view bodies as open-ended systems in constant exchange with their environment – beyond dualisms such as nature and culture, human and machine, subject and object, or individuality and community.

This idea of “transcorporeality” can also be applied to the museum: in continuous metabolic processes, various social, biological, technological, economic and political systems intersect. Against this backdrop, the exhibition activates an area in the museum that is freely accessible and opens toward the urban space with its transparent façades and glass doors on two sides: the foyer. 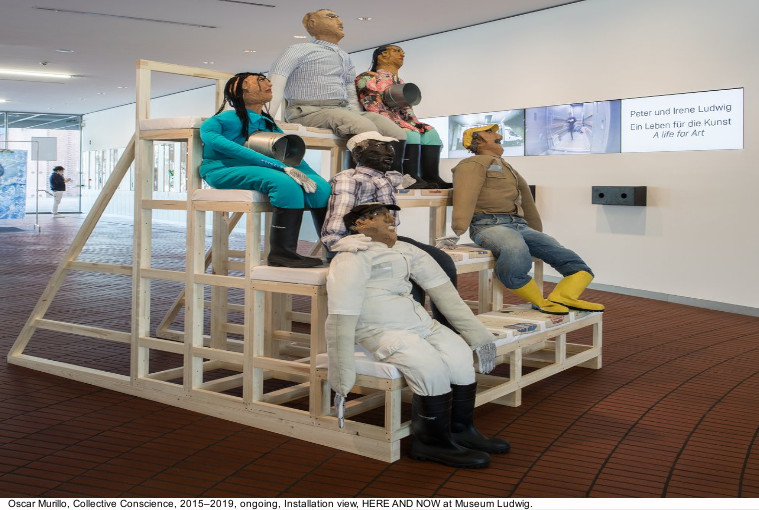 As a transitional space it forms a kind of membrane – on the one hand to protect the sensitive inner life of the institution from external influences, and on the other hand to open its pores to the environment and thus allow it to breathe. The artworks act directly on the space, create new microarchitectures, incorporate the existing facilities, or trace paths that run through the collection and further mediums the museum employs to reach its audience.

The works are immersive, processual, or performative. Some deliberately resist material tangibility. With his large-scale installation of bleachers inviting the visitors to take a seat between life-size figures, Oscar Murillo creates an agora situation around a stage on which a wide-ranging program of events will take place during the exhibition. 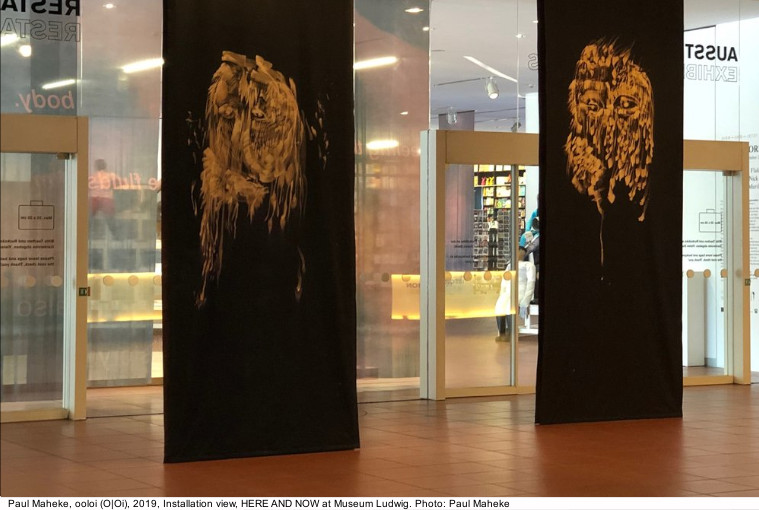 A similar performative potentiality is suggested by Paul Maheke’s interventions: with his new body of work he deliberately draws attention to the thresholds between interior and exterior and calls in OOLOI – a fantastical alien being of a third gender. Flaka Haliti also examines the perspectives on nonhuman corporealities and focuses on obscure deep-sea creatures that exist beyond human reach and thus provoke speculations.

While Jesse Darling’s installation with references to the legend of the Cologne patron Saint Ursula occupies some of the lockers in the foyer, Sondra Perry’s backhoe installation upends Western human exceptionalism. Technologies of representation are also shown to be porous when Perry uses them to reveal inherent discriminatory constructions of identity. 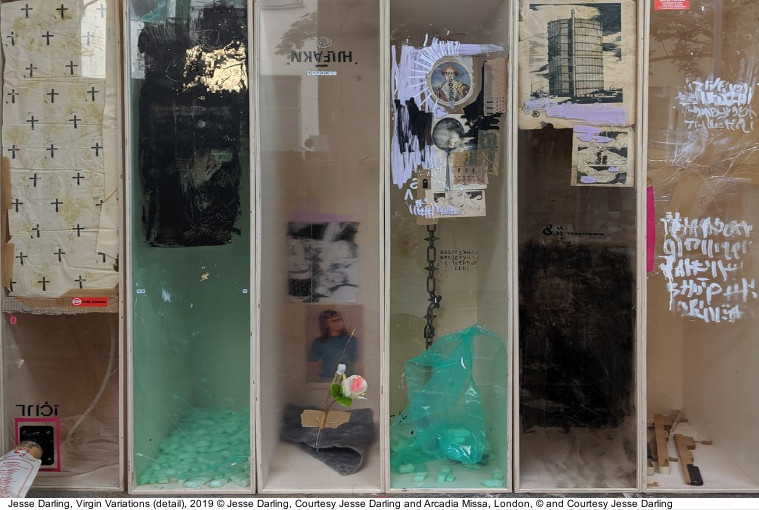 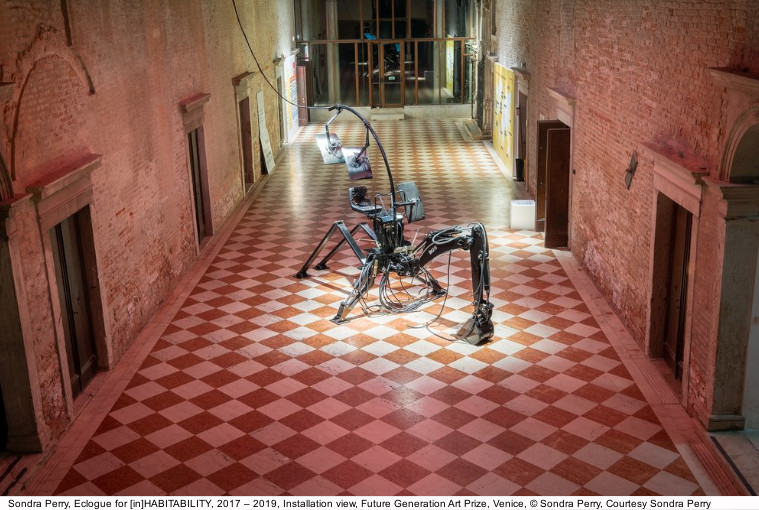 Park McArthur understands the body as a relational structure rather than a self-contained unit. The materiality of her two sculptural works in the foyer, made of sound-, friction-, and shock-absorbing foam and rubber, point to the interdependencies between bodies and their environment. With her artistic contribution to the catalogue she pushes the boundaries of the exhibition walls even further.

Trajal Harrell and Nick Mauss intervene in the collection and explore cross-media representations of corporeality and performativity in multiple ways. In response to being honored as Dancer of the Year in 2018 by the German magazine Tanz, Harrell examines his self(worth) in an eponymous dance solo and an installation.

His Dancer of the Year Shop assembles personal belongings of inestimable value, such as heirlooms from his family and friends as well as relics of his career, which he will put up for sale on certain days of the exhibition. Nick Mauss, on the other hand, draws out resonances between disparate works from the museum’s collection, such as Jasper Johns’s 15 Minutes Entr’acte (1961) encountering a painting of lingering performers by Erich Heckel (1928). 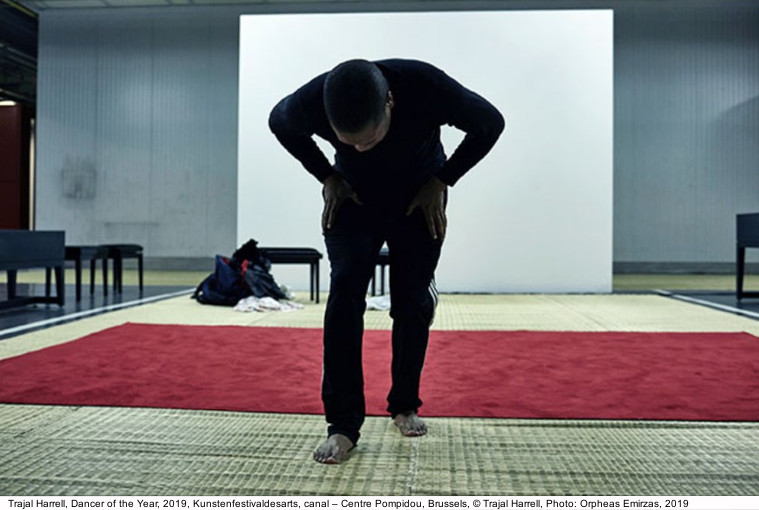 In Mauss’s configuration, titled Treatise on the Veil, these works dialogue with a projected photo archive by Carl Van Vechten and a new choreography developed with students from the University for Music and Dance Cologne. The artists share a transdisciplinary practice that reflects on institutional systems and their own role within these.

This includes the deliberate engagement with “transcorporeal” processes between lived experience and visual representation, inscriptions and attributions, or making visible and being seen. After all, when it comes to the manifold forms of embodiment, resistance and vulnerability are often just as precariously close together as autonomy and dependence, liberalization and instrumentalization. 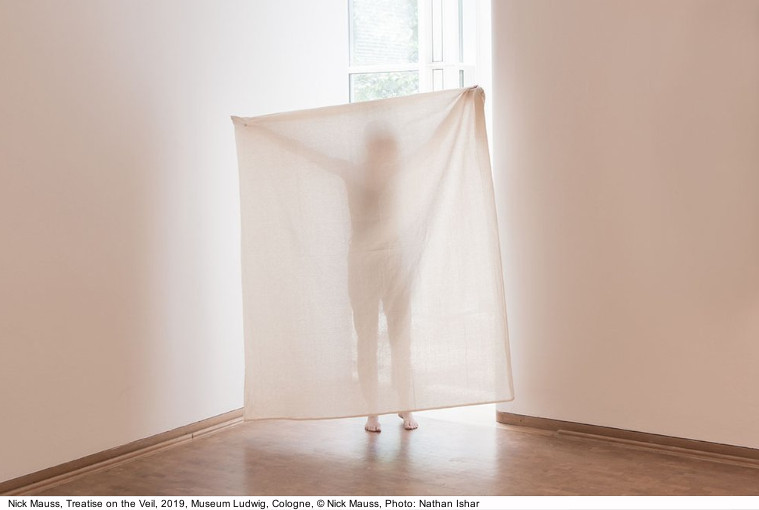 Museums are social places of education that, in accordance with their core task of collecting and preserving, create matter and meaning in the cultural memory. But to what extent do they also function as a kind of agora, as a place of assembly? Transcorporealities doesn’t aim at demonstrating the generosity and hospitality of the museum, but rather at negotiating unresolved institutional questions about accessibility as well as the possibilities and limits of representing bodies: Who do we mean when we say “we” and “they”?

Transcorporealities is the fifth exhibition in the project series HERE AND NOW at Museum Ludwig and is curated by Leonie Radine.