Among the first women to earn an MA in Painting from UC Berkeley in 1949, Sonya Rapoport (b. 1923, Brookline, MA; d. 2015, Berkeley, CA) was always a step ahead of her time. Charting her transition from modernist painter to ground-breaking conceptual artist, Sonya Rapoport: biorhythm provides an in-depth look at the artist’s output from 1974–83, a pivotal decade that marked a major shift in her work from abstract painting to the incorporation of emerging computer technologies. 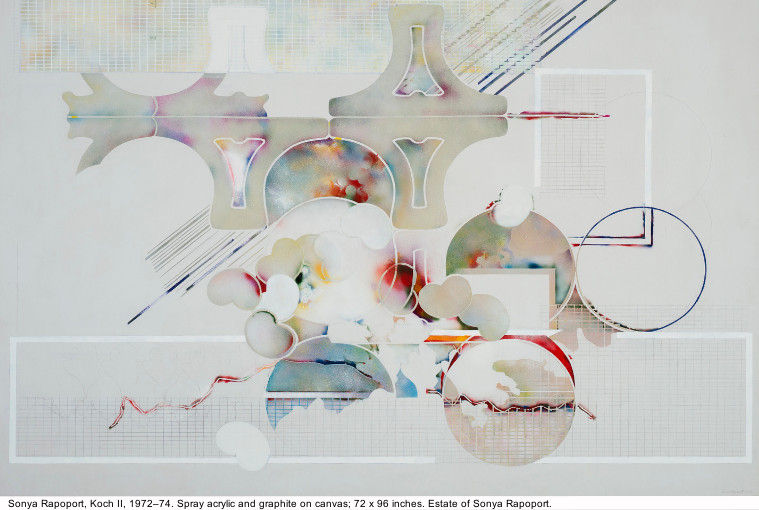 The first solo museum show since the artist’s passing in 2015,biorhythm highlights Rapoport’s growing fascination with formal and conceptual elements of computer-collected and analyzed personal data, from her large-scale painting in the Museum’s permanent collection, Beginning (1974), to geological survey-chart drawings and continuous-feed computer paper works on loan from the Sonya Rapoport Legacy Trust. biorhythm also brings together collages, artist books, documentation, and ephemera from Rapoport’s multi-part performance of the same name, Biorhythm (1980–84), which explored participatory interaction with computers.

Rapoport’s prolific career was fueled by a fascination with the linkages between coded systems and the self that was particularly ahead of her time and explored in her early work through symbolic abstractions appropriated from disciplines such as chemistry, botany, and biology. Her interest in computers was sparked in the mid-1970s, when she discovered discarded computer printouts in the Math Department at UC Berkeley and began incorporating them in her work. Fascinated, she took a programming class in 1977, which allowed her to analyze details gathered from her immediate surroundings, like the arrangement of objects on her dresser or her shoe collection.

The incorporation of personal data into graph-like drawings—as well as information gathered through collaborations with scientists at Lawrence Berkeley Laboratory, or with anthropologist Dorothy Washburn—marked a turning point in Rapoport’s career. A selection of these drawings from the late 1970s highlights how her visual mappings moved away from abstract representations to reflect more personal, political, and social issues. 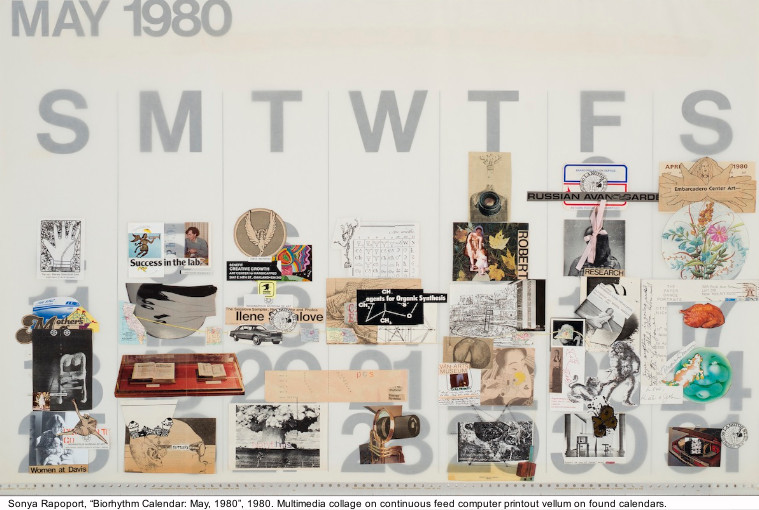 In the 1980s, the artist began tracking personal data into plots and collages through interactive computer-assisted performances—another innovative strategy that became crucial to the evolution of net art in the following decades. The multiyear performance piece Biorhythm (1980–84) relied on collected and analyzed personal data through both self-assessment and technology-based calculating. Using then-popular “biorhythm” computers to measure users’ emotional, physical, and intellectual states and comparing the data to personal accounts, Rapoport charted the correlation between computed and personal assessment.

The third phase of the project, perceptively titled The Computer Says I Feel… (1984) deployed this data as fuel for an imagined future in which individuals consult computers to assess their feelings. Rapoport’s critical yet playful anticipation of the intertwining of personal data and computers in the 1980s is almost uncanny. Today, myriad digital applications provide weather reports based on one’s exact location, individual daily horoscopes, and endless personalized content pushed out through computers and smart phones. By comparing computer-generated biorhythms with psychological analysis, Rapoport shrewdly questioned the impulse that cultural theorist Jeanne Randolph described with this turn of phrase: our primary assumption about technology is that it works. 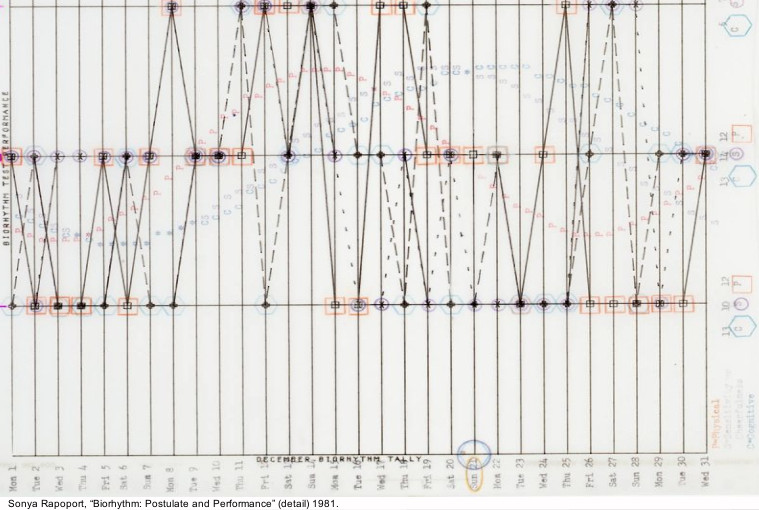 A participation space within the exhibition – organized by Kathryn Wade, assistant curator – offers viewers an opportunity to experiment with Rapoport’s prophetic methodology of characterizing oneself through a series of technological computations. Individual answers to a short self-assessment generate a collection of data points that each participant can illustrate through stencils of abstract data visualizations. Described by the artist as an attempt at “quantifying qualitative information,” visitors ultimately create a 21st century self-portrait inspired by her own computer-generated, chart-like work A 20th century Portrait (1982).