Pedro Reyes in “Return to Sender”

For his works, Pedro Reyes (b. 1972 in Mexico City) uses architecture, sculpture, video, performance, and participation to promote collective and individual power of action in political, social, ecological, and educational situations. Having worked with weapons in the past, he is interested in addressing the systemic problems of the arms industry within a pacifist framework. In the new production to be presented at Museum Tinguely Disarm Music Box (2020) he has repurposed gun parts to make music boxes that perform fragments of tunes from the countries where the guns were produced.

Reyes is concerned with «upcycling»-transforming an instrument of death into a musical instrument that stands for dialog and exchange. The new production will be presented for the first time and alongside with his work Disarm (Mechanized) II (2014) from 24 June to 15 November 2020 im Museum Tinguely. Pedro Reyes. Return to Sender is the fifth in a series, in which a conversation with Jean Tinguely’s Mengele-Dance of Death from 1986 is put on display. 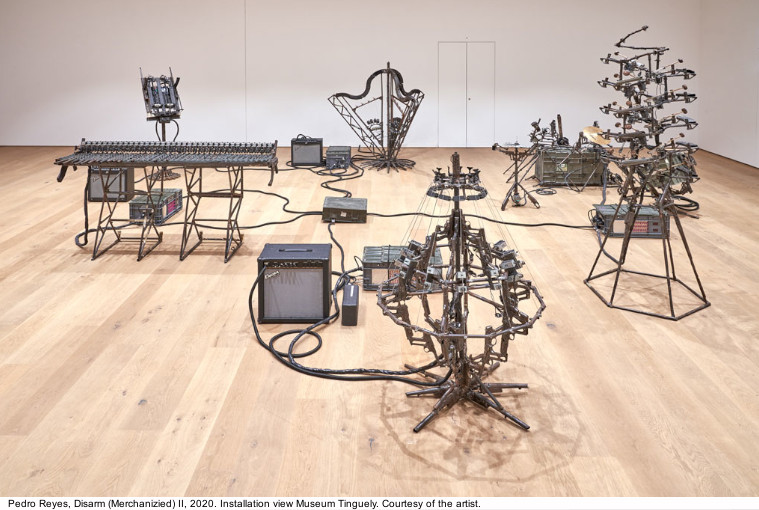 The invitation to Reyes to develop a new work for Museum Tinguely follows on from earlier work from 2012. For the work group Disarm, he was able to use 6,700 weapons confiscated in the Mexican drug war and transform these into musical instruments. In a first version (Disarm), he created instruments that could be played live by musicians who were friends of his.

This was followed by the conception of an multi-part weapon-instrument ensemble Disarm (Mechanized), I 2012-13 which plays percussive music pieces in a mechanized and automated way. The second of the two existing versions of Disarm (Mechanized) II, 2014 will enter into dialog with Tinguely’s Mengele-Dance of Death (1986) as part of the exhibition. In the dialog between the two works presented in adjacent rooms, Tinguely’s criticism of totalitarianism and Reyes’ critical examination of the society-destroying exchange processes of drugs and weapons meet in a gruesome dance of death.

Reyes attracted international attention in 2007 with his project Palas por Pistolas, for which he worked with the local authorities of Culiacán, Mexico, to exchange weapons from the local population for coupons to purchase domestic appliances and electronics, melt these weapons down, and recast them into 1,527 shovels to plant trees. Since then, these actions have continued both in the local environment and with international cultural institutions. In connection with Reyes’ exhibition «Return to Sender» at Museum Tinguely, this project is being continued with the planting of a new chestnut tree directly in front of the museum entrance in November 2020. 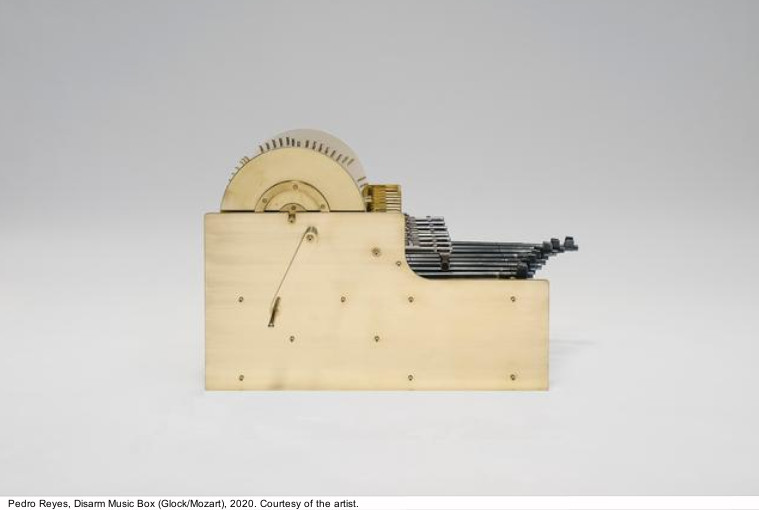 Both projects Palas por Pistolas and Disarm emerged from the specific situation of the Mexican drug war. However, the commercialization and proliferation of weapons is a worldwide problem that Reyes addresses with his new body of work Disarm Music Box (2020). With these works, he criticizes the ever-increasing accumulation of weapons throughout the world from a pacifist perspective.

In this newly created group of works, weapons are acquired from specific manufacturers—they can be found in almost every country in the world—and then destroyed in order to create resonating bodies from their barrels to be used in newly created music boxes. They play well-known classical music pieces from the respective manufacturer’s country of origin. A musical box made with Glock pistol parts plays Mozart, Beretta barrels Vivaldi, while Reyes matched Carabine with the Swiss songwriter Mani Matter.

Reyes is concerned with «upcycling»-transforming an instrument of death into a musical instrument that stands for dialog and exchange. He undertakes this transformation process with the conviction that the physical act is always accompanied by an idealistic one and appeals to the spiritual dimension of this quasi-alchemical operation towards the good.

Curator of the exhibition is Roland Wetzel who worked in close collaboration with the artist. Pedro Reyes will come to Basel for an Artist talk in early November once the current travel restrictions will have been lifted.